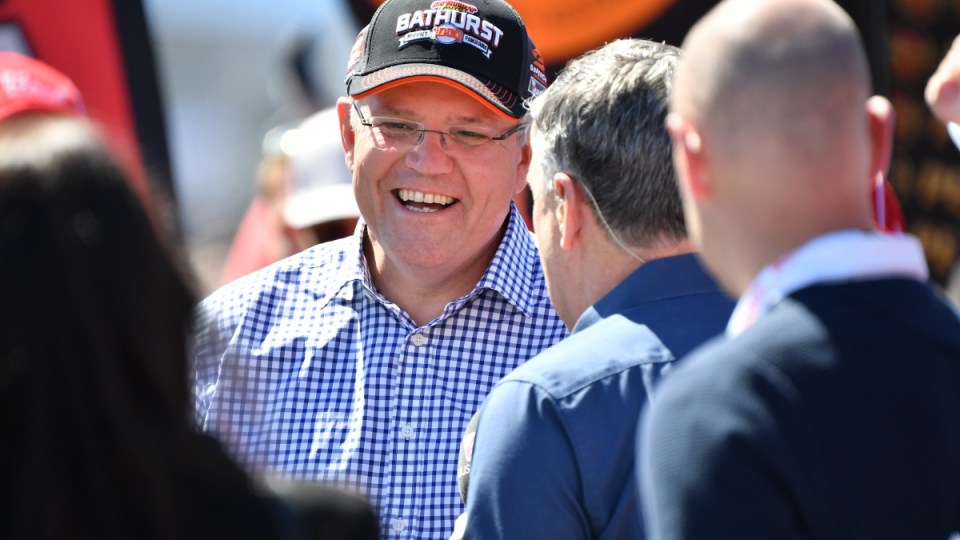 The prime minister said it was a "no brainer" to promote the race. Photo: AAP

Prime Minister Scott Morrison has declared the Opera House is Sydney’s “biggest billboard” in defence of the state government decision to promote a horse race on its sails.

Mr Morrison said it was a “no brainer” to use the world heritage asset to advertise The Everest race, describing those against it as “precious”.

“These events generate massive economic opportunities for the state and the city,” he told reporters near Bathurst, in regional NSW.

“Why not put it on the biggest billboard Sydney has?”

More than 91,000 people had signed a change.org petition against the advertisement by 10pm on Sunday.

“I don’t know why people are getting so precious about it,” Mr Morrison said.

“I’d put the Bathurst 1000 [car race] on the Harbour Bridge if I thought it was going to get more people there.”

The projection will play on Tuesday night before the $13 million race at Randwick on Saturday.

His defence came shortly after Premier Gladys Berejiklian insisted she was not bullied into overruling Opera House CEO Louise Herron, who rejected the application from Racing NSW.

“It’s happening on Tuesday and that was the timeliness of the issue,” she told reporters on Sunday.

Ms Herron on Friday said it breached Opera House policy, but had agreed to projecting colours for The Everest.

Jones said he would be phoning the premier and that Ms Herron should be sacked.

“If I were Gladys Berejiklian, I would pick up the phone and sack you today,” he said.

Ms Berejiklian intervened in the hours after the interview and said she came to a compromise with Racing NSW.

On Sunday, she said the final agreement was “much toned down to what the government was first presented with”.

“I’m absolutely confident the Sydney Opera House will continue to be the icon that it is globally and for us locally.”

Racing NSW is paying for the promotion, but it’s not clear whether the deal goes beyond covering costs.

The government has the support of Labor, despite the public backlash.

Opposition Leader Luke Foley was campaigning for The Everest to be promoted on Sydney landmarks last month.

He said a Labor government would beam images of the race on the Harbour Bridge and “conduct the barrier draw for The Everest on the harbour or approaches of the bridge”.

He also said the race should be designated a major event, in line with the NRL grand final, and install lights at Randwick to boost other races in the lead up to The Everest.

The statement added that Mr Foley’s first pledge as Labor leader in early 2015 was to cut NSW racing taxes to bring them in line with Victoria.

Fairfax reported two of Jones’ business partners have horses in The Everest.

Opera House policy says, “no logo or corporate identity shall be permitted to be projected onto the sails”.

In 2013, public photographs were projected on the sails under a partnership with Samsung.

It has also been used to celebrate Australia’s win at The Ashes, the Wallabies in 2015, and as part of Sydney Mardi Gras.

The Australian Institute of Architects backed Ms Herron on Saturday for protecting the Opera House from “exploitation”.

“We understand that as a major tourist icon, the Opera House will be expected to lend its prestige in the support of tourism from time to time,” NSW chapter president Andrew Nimmo said.

“However, this must be done with the utmost care.

“It seems we are continually seeing the commercialisation of major public spaces for the benefit of private commercial gain.

“We fear that a new precedent has been set where exclusive commercial interests have been supported by government over public benefit.”