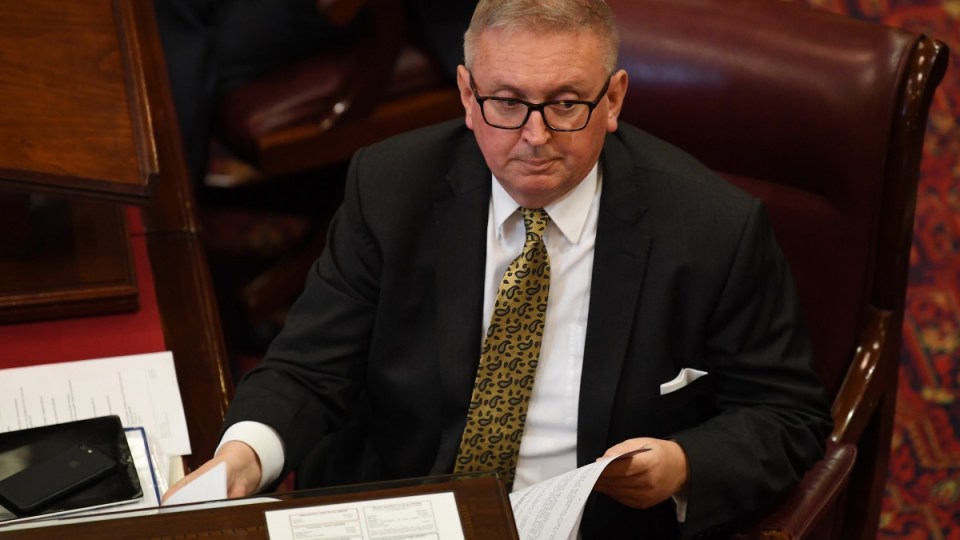 Arts Minister Don Harwin is pictured on Wednesday as the government surrendered to avoid his suspension. Photo: AAP

The New South Wales government has surrendered in its fight to keep controversial documents secret in order to avoid the expulsion of a senior minister.

Arts Minister Don Harwin on Wednesday told parliament the documents – on the Powerhouse Museum relocation, stadiums rebuild, and an independent report into out-of-home care – would be tabled by 5pm on Friday.

The government had for months refused to cough up the documents, claiming cabinet-in-confidence, despite being ordered by the upper house to do so.

The major backdown came after maverick backbencher Matthew Mason-Cox crossed the floor to support a censure motion of Mr Harwin, in his capacity as leader of the government in the house.

Mr Harwin could have been expelled from parliament on Wednesday had the government continued to defy the orders.

The case could have landed in the NSW Supreme Court had the battle continued.

The last time this occurred in NSW was the 1990s suspension of Labor’s Michael Egan.

The censure motion passed 21-10 on Tuesday with Mr Mason-Cox’s support, despite admitting Premier Gladys Berejiklian explicitly told him he would not be granted a conscience vote.

“It has been made clear to me today by the leader of the government and the premier that no conscience vote is permissible on this respective issue,” Mr Mason-Cox told parliament before the vote on Tuesday.

“I accept the premier’s judgement, however apparently conscience votes are only permitted where the premier permits them. To me, that is untenable and completely repugnant to the whole nature of a conscience vote, which is by its very essence personal to the member.”

Mr Mason-Cox had previously crossed the floor to support the three orders for papers, and said he had been disciplined as a result.

Labor MLC Adam Searle, who moved the censure motion on Tuesday, described the successful vote as “historic”. It is the first successful censure of a Liberal government leader.

He said the government was being held to account by parliament.

“The Berejiklian government just does not want to let the public know what they’re up to. It is addicted to secrecy.”

Greens MLC David Shoebridge on Tuesday said there had been a “shroud of secrecy over almost every controversial decision made by the government.

“Finally parliament is striking back at executive overreach.”

Robert Brown of Shooters, Fishers and Farmers Party (SFF) said all ministers were accountable “whether they like it or not”.

The Christian Democrats supported the government in an attempt to block the censure motion on Tuesday night.