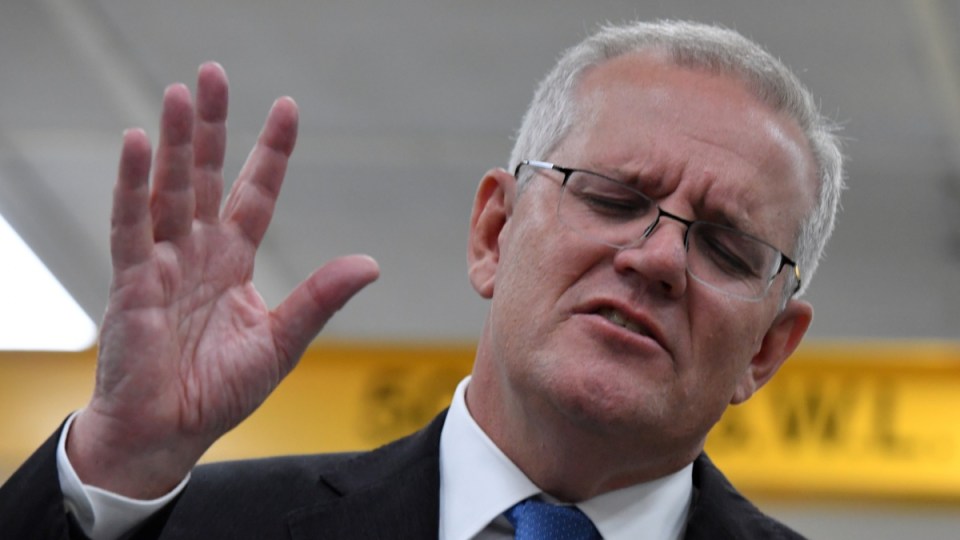 Scott Morrison has refused to be drawn on his plans if he loses the May 21 election. Photo: AAP

Prime Minister Scott Morrison has refused to say if he will remain in parliament if the Coalition loses the election, and a slew of independents hold power after May 21.

The Liberals face an escalating challenge from teal independents in some of their once safest seats, including Treasurer Josh Frydenberg’s seat of Kooyong and former PM Malcolm Turnbull’s seat of Wentworth, now held by Dave Sharma.

Mr Morrison has largely skipped those seats so far during the election campaign, amid chatter that he is “toxic” in inner-city Liberal-held seats.

He and other senior government figures, including Mr Frydenberg, have repeatedly claimed independents will cause parliamentary chaos and even weaken Australia’s national and economic security if they are successful in knocking off the Liberal incumbents.

Campaigning in Western Australia on Friday, Mr Morrison was asked if he would stay on in parliament if the Coalition lost the election or failed to win an outright majority. Repeatedly, he refused to answer directly.

Journalist: “You say it’s a cavalcade of chaos, so will you resign?”

Mr Morrison: “This is choice for the Australian people.”

Journalist: “That’s not a yes-or-no answer.”

Mr Morrison: “You get to ask the questions, not say what the answer is. My answer to that is, my answer lies in the lap of the Australian people. See, I’m the first prime minister … ”

In a lengthy reply, he said he was the first Australian prime minister to contest an election after a full term in the top job.

“I’m going to the Australian people at this election, and that’s the first time that has happened in about 15 years. And that has provided great stability and certainty, I believe,” he said.

“That was one of the things I said I would bring back to politics when I became prime minister. That I would provide that certainty and stability of leadership, which I have delivered from last election through to this election.

“I’m putting myself forward to be able to continue to provide that strong leadership. So the decision for the Australian people is up to them. And I put my trust in their good conscience and their good faith. That is my answer.”

Earlier on Friday, Mr Turnbull – the man who Mr Morrison replaced as prime minister – weighed into the debate about voting for independents.

He said the Liberal Party was once a broad church of liberal and conservative traditions, but since his “deposition in 2018” moderate voices had become increasingly marginalised.

“Even if the members of a political party cannot escape from the thrall of the dominant faction, their traditional supporters in the electorate can do so by voting for an independent who has a real chance of success,” he said.

Mr Turnbull also argued instability and chaos often came from within the party, although he later denied encouraging Australians to vote for independent candidates.

“Political instability invariably comes from internal ructions within the major, governing parties not from independents on the crossbenches,” he said.

“Many parliaments, including in Australia, have operated with stability and good effect with major parties requiring the support of independents or minor parties to pass legislation.”

Mr Morrison said he did not share Mr Turnbull’s view, and doubled down on his scare campaign about independents holding the balance of power.

“As a result, I urge the return of the Liberal-National government because that’s the strength that Australia needs in these times of great uncertainty.”

In Melbourne on Friday, Mr Frydenberg took aim at Mr Turnbull. He also repeated his claim that his main challenger, Monique Ryan, was masquerading as an independent and a vote for her was essentially a vote for Labor.

“It’s deeply disappointing to see those comments … in the case of Monique Ryan, she’s described [Mr Turnbull] as a national disgrace,” he said.

“I don’t know how Malcolm Turnbull could endorse somebody who called him a national disgrace.”

“It’s not about Mr Turnbull just tossing out his former allegiance to the party that made him the prime minister of Australia … he understands politics and he’s inherently going to inspire a process that makes our nation weaker.”

Labor leader Anthony Albanese, campaigning in Sydney on Friday, said the Liberal Party was a “rabble”.

“The Liberal Party are divided. They are a rabble. They are led by a man who a whole lot of his own frontbench don’t want him anywhere near their seat and don’t want to appear with him in public,” he said.

“That stands in stark contrast to Labor. Labor which is united, Labor which is ready to form a united, cohesive government, Labor that has a clear plan for a better future. The Liberals are a mess – that is the truth of the matter.”