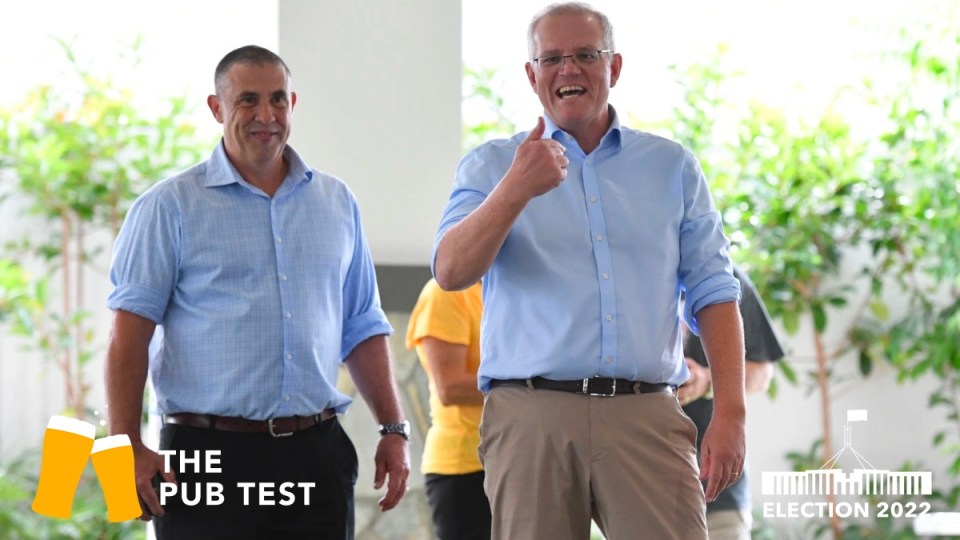 The New Daily visited the Club Tavern in Caboolture this week to see if the Coalition's Pacific record passed the pub test. Photo: TND/AAP

Longman is the Coalition’s most marginal seat in Queensland and the electorate that in some ways helped propel Scott Morrison to the prime ministership.

It was the Longman by-election in 2018, retained by Labor with a swing against the LNP, that was the catalyst behind the leadership spill against Malcolm Turnbull that ultimately led to Mr Morrison taking over.

Longman was also a key pick-up for the LNP in the 2019 federal election, with retail businessman Terry Young becoming a first-term MP with a margin of 3.3 per cent.

The sprawling urban-rural seat takes in the working-class postcodes of Caboolture and Morayfield, outside Brisbane’s northern fringe, which are frequently listed as having among the highest unemployment rates in Australia.

To the west are quaint country towns like Woodford and in the electorate’s east, nestled on the coastline, is Bribie Island, a retirement haven that swung to the Labor Party at the 2020 state election.

Federal Labor hopes that swing will be replicated in May with their candidate Rebecca Fanning, a former health policy adviser who has been running a health-focused campaign and is tipped to win.

Since 2007, Longman has changed sides four times, making it one of the most volatile electorates in Queensland. Which is why TND chose it for the location of its third pub test.

Each week until election day, we’ll be visiting pubs in key electoral battlegrounds to ask locals for their opinions on a major election issue.

Has the Morrison government dropped the ball on China’s influence in the Pacific?

Does their diplomatic record pass the pub test?

“I reckon they’ve dropped more than the ball on it. The Solomon Islands are pretty close and we don’t want the Chinese running around over there with missiles, do we?

“The further we can keep them away, the better.

“The government should be doing more to keep the Solomon Islands on our side. Once the Chinese get in there, they (Solomon Islands) are going to be on their side and where does that leave us?”

“As a civilian, I am paranoid and for all we know World War III could be just upon us.

“I mean, Russia has already started … but knowing that China could put a military base in the Solomon Islands – the government has stuffed up.

“With the election coming up I definitely will not be voting Liberal. Not just because of this but 2020 – the fires. Where was ScoMo? Where was he? We needed him most and he went to Hawaii.

“I do not vote for people who don’t help us out or drop us down and not tell us which way is up.”

“They [dropped the ball] way back in the 1970s when they abandoned all those Pacific islands and that left the door open for China to come in.

“Progressively, Liberal government policies would have reduced the amount of foreign aid given to the Pacific islands and how they fix it, I don’t know.

“It is scary, but I don’t know how you solve it.

“The proximity of the Solomons to Australia and the potential of what China can do just makes it really important that whatever government comes in, they start to have a better dialogue with China because we could end up like Russia and the Ukraine.

“And we ain’t gonna win against China.”

“I think they have dropped the ball.

“The Solomon Islands may feel threatened because of Australia’s nuclear sub deal with the United Kingdom and the United States. They’re probably afraid of the repercussions from China and since China has the financial power to assist them economically, it’s only natural that they would want to extend the deal one step further and secure their own future.

“For them to sign a defence pact with China tells me that they’re afraid that there might be too much, particularly United States, influence in this quarter of the world.”

“I don’t really know who to blame.

“I don’t know enough about the politics and stuff.

“But we definitely need a leader who knows what they are doing about that sort of stuff and it’s got to change.”

“It’s just too close. I just don’t like it. I’m against it, China’s reach in general.

“I look in the papers and see what the Chinese are doing in the waters and it’s almost like they’re up to something. That’s a calculated move and we’re silly to ignore it.

“They dropped the ball ages ago, but there’s nothing they can do about it because it’s a different country.

“The Chinese have been buying Australia out and they’ll get us in 50 years’ time or something, but either way they’ll get us. It’s politics.

“We can’t go over there and buy land, but they can come here and buy thousands of acres. They bought that cotton farm up north.”

With six fails and one undecided vote, the Coalition clearly failed this week’s pub test in the marginal electorate of Longman.

But polling by Roy Morgan suggests the campaign’s renewed focus on national security is playing well for the Coalition among older voters across the country.

Next week, we’ll be visiting the marginal electorate of Boothby in South Australia.