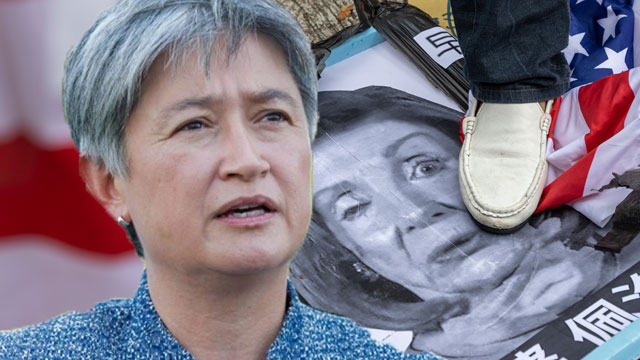 Unlike the machismo posturing of the Morrison years, Foreign Minister Penny Wong has restored a quiet, collaborative touch to the portfolio. Photo: AAP/TND

The Albanese government faced its first powder keg moment in the region this week when US congressional leader, Nancy Pelosi travelled to Taiwan.

The Australian response, led by Foreign Minister Penny Wong, could not have been more spot-on in substance and delivered with greater diplomatic skill.

In 1979, Washington recognised Beijing as the “sole legal government of China”, adopting a One China policy (as Canberra had done in 1972). This entailed a promise to conduct only “unofficial relations with the people of Taiwan”. The Chinese government considers the visit of Ms Pelosi, third in line to the US presidency behind Vice-President Kamala Harris, as violating this promise.

The last time a US congressional leader visited Taiwan was 25 years ago, when Republican Newt Gingrich touched down in Taipei. But there is a difference – unlike Ms Pelosi, he was not from the same political party as the president.

Beijing’s assessment of US intentions was already red raw following what it sees as a series of “salami-slicing” measures taken during the Trump and Biden presidencies that render Washington’s adherence to a One China policy ever more flexible. Plenty of US commentators have concurred with that assessment, albeit the White House rejects it.

The Australian government’s response this week consisted of three parts.

Firstly, a refusal to engage in hypotheticals, like whether Australia would line up with the US in a military conflict against China over Taiwan.
This refusal used to be a standard, bipartisan Australian political position before former defence minister Peter Dutton threw it out last November without providing any explanation why doing so advanced Australia’s interests.

Second, a reiteration of support for Canberra’s long-standing One China policy and “discouraging unilateral changes to the status quo”.
The latter was not a specific dressing down of the US but the fact is that what kicked off this week’s drama was not any action by the Chinese side.

Third, calling for “all parties” to de-escalate tensions.

In other words, the Australian government was certainly not endorsing Beijing’s position or disregarding its earlier unhelpful actions, such as having cut off dialogue with the Taiwanese authorities since 2016. But nor was it dumbing down the potential crisis to a simple story of “US good, China bad”.

In the 48 hours that followed Ms Pelosi’s visit, this three-part response was repeated with impressive discipline: there was no defence minister or government backbencher inserting their own commentary and undercutting Foreign Minister Wong’s handling of her portfolio.

This discipline held even as the North-Atlantic-heavy G7 released a statement that summarily dismissed any of Beijing’s objections to Ms Pelosi’s visit, instead homing in on the Chinese government’s “threatening actions” and “escalatory response”.

Yet from within US allies and partners in East Asia, assessments showed more shades of grey, including that the visit was unnecessarily
provocative and self-serving.

In the coming weeks, Beijing’s rhetoric and actions, which already include highly disruptive and potentially dangerous live-fire military exercises just off the Taiwanese coast, may cross a threshold that makes it necessary and appropriate for Australian government ministers to single China out for criticism.

But that possibility only makes the fundamental point: rather than pre-emptively boxing itself in, the government is carefully calibrating its response to facts as and when they unfold.

In contrast, the habit of the previous government was to rush out in front with hairy-chested bravado and then sometimes find itself left standing like a shag on a rock.

Another takeaway from this week has been the Albanese government‘s
implementation of a more fundamental shift in Australian foreign policy it hinted at during the election campaign and on which it has expanded since winning government in May.

Canberra now shows the instinct to engage and understand the perspectives of other capitals in the region, particularly those in South-east Asia, and then align its response with theirs to the extent that Australia’s own national interests permit.

The Morrison government, on the other hand, came to view the region almost exclusively through the lens of great power competition: a clash between an “arc of autocracies” like China on the one hand, and liberal democracies like those in the North Atlantic and Australia on the other.

Last month, Ms Wong delivered a speech in Singapore that touted a vision of “regional order with ASEAN [Association of South East Asian Nations] at the centre”. She explained the new Australian government’s emphasis on “ASEAN centrality” meant that, “we will always think about our security in the context of your security … We believe that Australia must find its security in Asia, not from Asia. And that means, above all, in Southeast Asia.”

When Pelosi was in Taiwan, Ms Wong was heading off to Cambodia for two days of ASEAN-led meetings. Upon arrival, she took the opportunity to note that a just-released statement from ASEAN foreign ministers reflected “similar views” to Australia’s. She was right: Jakarta, like Canberra, was also calling on “all parties” to de-escalate.

Australians won’t be able to escape the fallout if things in the Taiwan Strait deteriorate. But they can at least take some comfort from knowing there are now adults back in charge who won’t themselves make a bad situation worse.

James Laurenceson is Director and Professor, Australia-China Relations Institute (ACRI) at the University of Technology Sydney
Follow Us