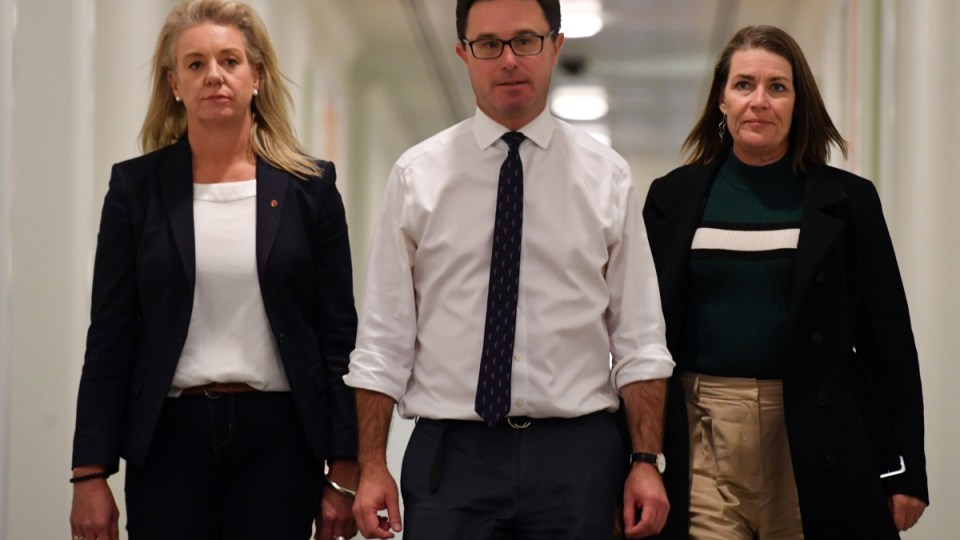 Former deputy PM Barnaby Joyce has made his first comments about losing the Nationals leadership to David Littleproud.

“I suppose you think I am sad. Not really,” Mr Joyce said on Monday.

Mr Joyce was rolled as Nationals leader in a marathon post-election spill in Canberra on Monday. Mr Littleproud, his former deputy, emerged the winner in a three-way leadership contest – which also included Mr Joyce and Victorian MP Darren Chester.

Mr Littleproud’s deputy will be NSW Senator Perin Davey elected deputy. There were also three contenders for her position, although the other two names are yet to emerge.

Mr Joyce congratulated the new leadership team – and hinted he had no plans to leave parliament.

“They have a mighty task ahead of them and I will give them all the support I can,” he said.

“Now, I have a chance to get back to my second greatest love, after my family, and that is my beloved people of New England, where I will have more time to get around my electorate and to be a person of service to them.

Earlier, Mr Littleproud described his win as “the proudest day of my professional life”.

“I believe passionately in the National Party because we are all there is about regional and rural Australia. We are the conscience of rural and regional Australia right here in this parliament,” he said.

“The National Party today starts its journey towards 2025, with a vibrant team, ready to articulate the policies that are important to regional and rural Australia.

“But also to draw on the experience of two former deputy prime ministers in Barnaby Joyce and Michael McCormack. To build that bridge of unity and purpose, to make sure that regional and rural Australia isn’t forgotten here.”

Mr Littleproud said the Nationals would draw upon the “strength” of Senator Davey and Senate leader Bridget McKenzie in his leadership team.

“And I’m proud to say that part of my leadership is two bright, articulate, powerful women. That’s the National Party way.”

Ahead of the Canberra meeting, Mr Joyce was “sanguine” about holding on to the leadership.

Mr Joyce made his case on the Seven Network, saying the junior Coalition party must have been doing something right because it retained all its seats at the federal election.

“We won every seat we had before the election, we had three retiring members and still won the seats [and] we were in striking distance of one of the two seats we will be able to take in the next election,” he said.

“In the last two elections, that I’ve been the leader, we’ve only picked up seats. We must be doing something right but the job is not over.”

However Mr Joyce was accused of having Liberal blood on his hands after his party’s support of coal turned inner-city voters off sitting moderates.

Former moderate Liberal MP Trent Zimmerman, who lost his North Sydney seat after a 12.5 per cent swing against him, accused Nationals MPs of derailing the campaign for inner-city seats.

“There’s a whole package of reasons we lost in inner-city seats like mine. Clearly, climate change was one of the key issues,” he told the ABC.

“I thought Matt Canavan’s intervention was one of the killer moments for us.

“There was just an underlying suspicion that at the end of the day that people like Canavan … and Barnaby Joyce would prevail if we were elected.”

Mr Zimmerman called on the Coalition to recognise Labor’s policy of a 43 per cent reduction in emissions by 2030. It was significantly higher than the 26 to 28 per cent target the Coalition took to the election.

‘I suppose you think I am sad’: Joyce reacts to losing Nationals’ leadership