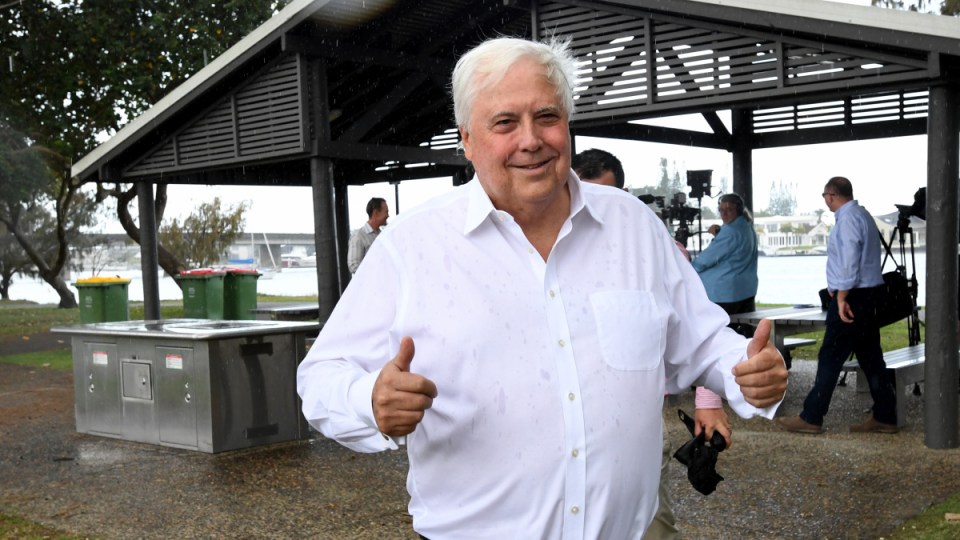 "I think I've got less to offer in the future," Clive Palmer says of a potential run for parliament. Photo: AAP

Businessman Clive Palmer says he’s “reluctant” to run for federal parliament again because he’s got a new boat and has faith in Craig Kelly to lead the United Australia Party.

The former federal MP said the party he founded was the largest in the country, with 70,500 members – and growing at 500 a day.

“We’ve now become the undisputed, largest political party in Australia by membership … it’s really an unprecedented situation,” he said on the Gold Coast on Friday.

“A lot of these people are former members of the Liberal Party, and the Labor Party, and the Greens. They are realising Australia needs a new direction.”

Mr Palmer said UAP would stand candidates in every lower and upper house contest at next year’s election but indicated he won’t be among them.

“I’m very reluctant … because I’ve got a nice big boat that’s coming to Brisbane. I want to get out and go fishing and stuff like that, plus I think I’ve got less to offer in the future.”

He said new leader, former Liberal MP Craig Kelly, was the one to take the party forward.

“I’m 67, he’s in his mid-50s. He’s got the vision, he’s got the character and I’m certainly there to support him with our assets, with whatever I can do, to give him a fair go.”

Mr Palmer, who has refused to be vaccinated against COVID-19, denied the UAP was an anti-vaccination party, despite Mr Kelly’s history.

Mr Kelly quit the Liberal Party and moved to the crossbench in February after he was criticised by Prime Minister Scott Morrison for spreading misinformation about vaccines and alternate coronavirus treatments on social media.

Mr Kelly has also weathered bans from Facebook for peddling misinformation, and is facing potential legal action from the Therapeutic Goods Administration, which accuses him of misrepresenting its data on vaccine reactions.

Mr Palmer said he would be willing to get vaccinated in seven to eight years, once there was long-term “safety data”.

“Yes, if there’s been properly run trials. But there hasn’t been at the moment,” he said.

He said his party was challenging the way governments have responded to the pandemic, by locking people up and sending businesses to the wall.

“There’s a whole idea to set up a precedent based on fear, and what’s the fear?” he said.

“When you look at our total number of people that die of diseases every day, it’s a normal occurrence in the circle of life. It’s not something that’s out of control.”