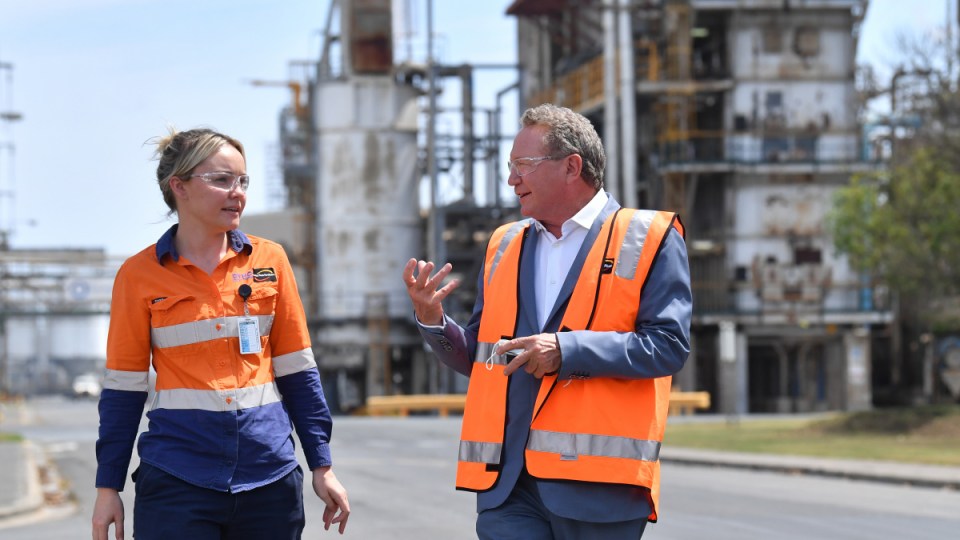 His comments came as Prime Minister Scott Morrison and Energy Minister Angus Taylor put the finishing touches on the Liberals’ emissions reduction plan to present to the Nationals within the next week.

Mr Forrest has added his voice to calls for Mr Morrison to attend the upcoming COP26 climate summit in Glasgow instead of sending a senior minister.

“The head of our country, with a carbon neutral date which we can all be proud of, will be immensely welcomed in Glasgow by all other national leaders,” Mr Forrest said in Brisbane on Monday.

Mr Forrest joined Queensland Premier Annastacia Palaszczuk at the launch of a feasibility study of ammonia production in Brisbane on Monday.

The study, due to be completed within three months, will investigate building a new water electrolysis plant on Incitec Pivot’s Gibson Island fertiliser plant in Brisbane.

It would produce about 50,000 tonnes of renewable hydrogen per year, which would then be converted into green ammonia for Australian and export markets.

It is being run in partnership with Mr Forrest’s Fortescue Future Industries.

On Monday, he warned politicians who dismissed the risk of increasingly climate-conscious businesses and investors withdrawing from Australia for other markets did so at their own peril.

“As institutions start to withdraw their capital from countries and companies which have no climate targets then it’s going to impact the lifestyle of every single Australian,” Mr Forrest said.

“If a politician pops up and says ‘that doesn’t matter’, then all I can say to you is that’s really bad politics.”

Mr Morrison acknowledged the need to bring Coalition partner the Nationals along with the federal government’s plan for the “new energy economy”, which is expected to show how to achieve net zero emissions by 2050.

“It is now a question of how, not if, we can ensure that those communities right across rural and regional Australia can look at this change and understand that there are big opportunities and there is a way through,” he said in Canberra.

Nationals deputy leader David Littleproud said he and his colleagues were yet to see the plan but believed it was “imminent”.

“We’ll work through the issues together and then we’ll make a determination as a party room,” he said.

“But obviously, if the Prime Minister requests us to make a determination before Glasgow we’ll work to those timelines as best we can.”

Groups including the Business Council of Australia, which has come out with its own roadmap for a 50 per cent emissions reduction by 2030, want to see greater ambition.

Under the BCA’s suite of proposed measures, existing obligations on polluters through the government’s climate safeguard mechanism would be tightened.

“A substantial tightening of the safeguard mechanism is a backdoor carbon tax consumers will ultimately have to pay for and that’s not acceptable to government,” he told a climate forum on Monday.

Mr Taylor also signalled to the Nationals their concerns were being addressed, declaring net zero did not mean zero emissions across the economy.

Labor’s climate spokesman Chris Bowen said the government not only needed to commit to net zero by 2050, but legislate the commitment and significantly improve its medium-term targets.

He flagged support for an Energy Security Board recommendation for a mechanism to incentivise providers to retain existing power generation and ensure reliability as more renewables came on board.

The Stats Guy: What does tourism in Australia look like now that travellers are returning?
Child care boost: Government will boost subsidy by $2200 a year for ‘average families’
Today's Stories