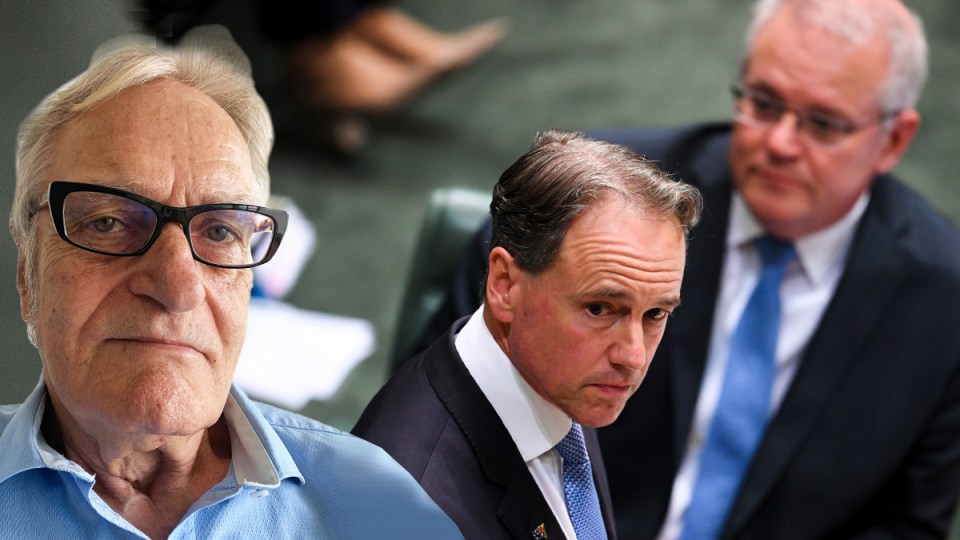 There’s no one in the Morrison government who loves a statistic more than Health Minister Greg Hunt, the former engagement manager with international consultants McKinsey & Co.

He prefaces just about everything he says with the grim, global totals of COVID-19. On the day Victoria announced its seven-day lockdown, Hunt sent a coded message reminding people they were relatively lucky.

“On this difficult day it’s worth recalling that around the world there have been 557,000 cases and an agonising 12,900 lives lost,” said Hunt. He does it just about every time he stands up, in an almost ghoulish way.

It’s one of the main tricks in the McKinsey toolkit – along with PowerPoint presentations and playing-card-sized talking-point cheat sheets.

Hunt mixes his brow-furrowing number calls with an enthusiasm reminiscent of a jolly hockey sticks school backstory. He’s a bang-on booster of Prime Minister Scott Morrison and a BFF with Treasurer Josh Frydenberg (despite challenging him for the party’s deputy leadership in 2018).

That boosterism never shone more brightly than it did on March 31 last year when Hunt told a news conference in Canberra how the National Cabinet is “a unique arrangement in Australian history, and it’s been done at a time when everybody has been dealing with massive pressures on their economic, social and health systems, all at the same time.

“And for that integration to occur, I think, has been extraordinary.

“In 50 and 100 years’ time, I suspect people will look back on this National Cabinet as being one of the most amazing achievements of the federation in Australia’s first 200 years. That’s my honest view.”

Hunt loved the national cabinet so much he added the word “unity” to its title. No one picked up his innovation.

The late-March news conference was held during those now long-passed days when politicians and policy makers gathered under a banner reading “All in this together”.

Almost 15 months after it was announced on March 13 last year, has the national cabinet lived up to the hype? In a one word assessment, no.

It’s not “one of the most amazing achievements of the federation”. Not by a long shot. You’d have to put it in the queue behind a universal welfare system, beginning with pensions in 1908, and culminating in a wide-ranging system established during World War Two.

Medicare, native title, superannuation, an economy open to international and domestic competition and a record of equality and anti-discrimination laws should also take precedence over a meeting schedule for politicians.

Being from McKinsey, Hunt might find process more impressive than social and economic achievement, or maybe he just wanted to throw the switch to those hockey sticks and impress his boss.

There’s no doubt the national cabinet played an important role in getting governments working together in those first few months, particularly during the eight to 12 weeks of full or partial lockdown after COVID was recognised as a pandemic.

Then its purpose and achievements waxed and waned – and continue to do so.

After moving to a monthly meeting schedule, the national cabinet was little more than a clearing house for decisions and recommendations from the chief medical officers’ peak group, the Australian Health Protection Principal Committee.

Some premiers took the unintended hint and stayed quiet during meetings, finding other ways to advance policy and practice.

The way Morrison has used national cabinet for his own political – and re-election – plans was seen most blatantly in his early April “decision” to put the body on a “war footing” which would turn all of its attention to getting the then stalled vaccination strategy on track.

Morrison announced the national cabinet (then meeting just once a month) would be convened twice a week. It did so for one week – meeting on a Monday and again on a Thursday.

The first meeting took an in-principle decision to extend the availability of AstraZeneca vaccine to people aged 50 and over. The Thursday meeting endorsed that decision. The war footing was wearing slippers.

By the end of that first week, state officials were told there wouldn’t be any more twice-weekly meetings and the schedule soon slipped to once a week. That lasted just into May before things went back to monthly.

Quizzed about it this week, Morrison shifted shape, words, intention and outcomes all at once, making it sound like a pathetically modest aim was a “pin a medal on my chest” achievement.

“We put the measures (being proposed) in place which brought all of those things forward, which states were keen to do and we were keen to support them to do as well,” he said.

The decision to “bring forward the over-50s” might be an achievement of the war-footing national cabinet but the “greater state-based vaccination clinics” was something some of the states – particularly New South Wales and Victoria – did by themselves despite resistance from the Commonwealth (which still clings to its pro-GP, Australian Medical Association designed vaccine plan).

Like so much Morrison does – with great, middle-level marketing management success – national cabinet is more talking than doing now it has moved to the bit where it’s a showcase of political ambition.

The national cabinet is probably worth maintaining until the pandemic fades to something more like an endemic illness.

Then we should get rid of it.

Dennis Atkins: Why national cabinet should be abolished after the pandemic