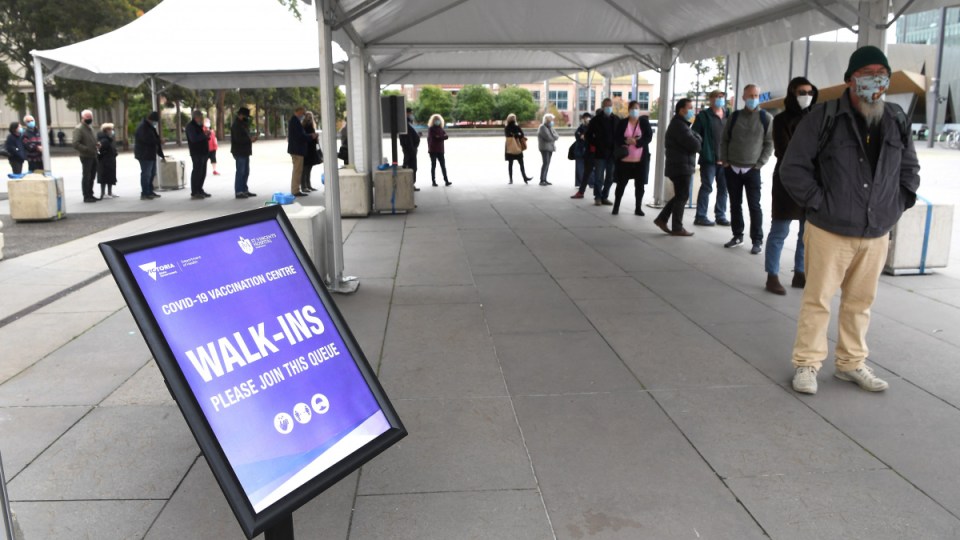 Australia has hit a huge supply hurdle that will set us back months, experts warn. Photo: Getty

The four cases came from a record more than 47,000 tests on Thursday – with lengthy queues already developing at the state’s testing centres ahead of another bumper day tipped for Friday.

There were also two new infections in returned travellers in hotel quarantine.

Thursday was also another record day for COVID vaccinations, with 17,223 shots administered across the state.

Victorian authorities are expected to give further details at a briefing later on Friday.

The state’s seven-day shutdown began at one minute to midnight on Thursday, to try to contain an outbreak of the Indian variant of COVID-19 in Melbourne’s north, which has spread to 30 people.

More than 14,000 primary and secondary contacts are self-isolating and there are more than 150 exposure sites across Melbourne and regional Victoria.

“The vaccine is really our only ticket out of this,” Health Minister Martin Foley said on Thursday.

The state’s coronavirus hotline was inundated with calls immediately after it was announced vaccination eligibility would be broadened, with some people on hold for hours trying to secure an appointment.

The health department said it was flooded with more than 77,000 calls in a 15-minute window before “technical issues” were resolved.

The latest outbreak, seeded in South Australian hotel quarantine, has again raised questions about the capability of Victoria’s contact tracing system, which was partially blamed for the state’s second 112-day lockdown.

But chief health officer Brett Sutton said it was “absurd” to suggest contact tracing was failing.

The lockdown is set to end at 11.59pm on June 3, although Acting Premier James Merlino said it could end earlier.

He said he had faith in the state’s contact tracing team but the virus was “running faster than we have ever recorded”.

Victorians can leave home only for five reasons: To shop for food and essential items, to provide or receive care, for exercise, work or study, or to get vaccinated.

Victorian must observe a five-kilometre travel limit for exercise and shopping, and compulsory wearing of masks both indoors and outdoors.

All non-essential shops are closed but essential stores like supermarkets, bottle shops and pharmacies remain open, with shopping limited to one person per day, per household.

Cafes and restaurants can offer only takeaway.

Childcare and kindergarten facilities have remained open but schools are returning to remote learning for most students. State-run schools are having a pupil-free day on Friday to prepare for the switch.

Meanwhile, Coles and Woolworths have imposed a limit of two packs of toilet paper per person after shoppers rushed to stock up.

“We have plenty of stock in our supply chain, and this temporary measure will help us to manage demand so that we can return our stores to a fully-stocked position as quickly as possible,” Coles said in a statement on Friday.

The lockdown is expected to cost Victorian businesses up to $1 billion.

Four new COVID cases on day one of Victoria’s lockdown