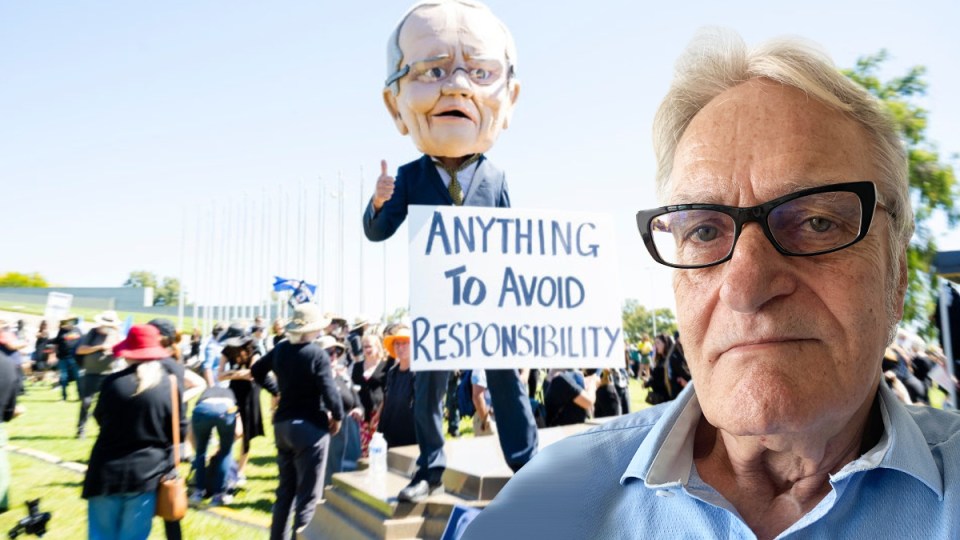 Women have had enough, but the response from Scott Morrison shows he just doesn't get it.
opinion

Politics has always been hardball. It isn’t beanbag and some say it isn’t for the faint-hearted. Despite aspiration and some determination, recent times have shown clearly it can be an unwelcome and unsafe place for women.Some of this is the tail of a long history. Australia has had men who’ve served as prime ministers with questionable and, at times, appalling attitudes and behaviour towards women.

Plenty of senior men in elected office and among their staff have done everything from swagger with demeaning and belittling attitudes to commit violent sexual assaults.

No wonder tens of thousands of women marched across the country under the simple banner of “Enough” this past week.

Regardless of this loud shout, the response from Scott Morrison shows he simply doesn’t comprehend what this is about.

It’s not just his tin-eared quip about how fortunate those marching and attending rallies were because they didn’t live in circumstances comparable with Myanmar, as bad and as dead dumb as that was.
It was on display in two other ways that told us so much about his character and the particularly blokey masculinity he relishes and seeks to burnish for electoral gain.

Brittany Higgins made a spear-like charge against the office of the Prime Minister when she spoke outside her former workplace on Monday.

“I watched as the Prime Minister of Australia publicly apologised to me through the media, while privately his media team actively undermined and discredited my loved ones,” Higgins said.

This is the dirty detail of how the Prime Minister’s office has handled this inconvenient truth.

Since then, Labor frontbench MP Catherine King has asked Morrison about the matter. Her queries have been brushed aside, including on four days this week when she pushed the issue further.

“I would never do that. The apology that I offered in this place to Brittany Higgins was sincere and was genuine, and I’m happy to restate it.”

As King pushed for an answer on Tuesday, Wednesday and Thursday, Morrison simply referred her to his Monday “response”. It was stonewalling on a scale equal to anything seen in the Vietnam War days.

We don’t know anything about this briefing, and no one in or around national politics is suggesting who in Morrison’s office might have been blackening the name of anyone close to Higgins.

The suggestion is that someone in the Prime Minister’s office claimed Higgins’s partner, a former Coalition staffer and press gallery journalist, was pushing for the matter to be aired because he felt wronged. It’s offensive on multiple levels. But, beyond that, who knows?

The other clue to Morrison’s inability to understand any of these issues came towards the end of Question Time on Thursday, when he went full nasty towards Labor’s Anthony Albanese:

“I’m happy to have my character as an individual in this place, Mr Speaker, and in my personal conduct, matched against this Leader of the Opposition any … day … of … the … week.”

The sentiment was politics as hardball, the non-beanbag version. But the clue to Morrison’s thinking was in how he delivered this schoolyard taunt.

It was junkyard dog nasty with the requisite snarl. Full of testosterone and puffed up, Morrison leaned across the dispatch boxes as far as he could, spitting out word after word.

With half a happy place smile, he turned back towards his colleagues and sat, his back to the rest of the Parliament. Most of those colleagues looked on with a mix of not comprehending and awkward silence.

It was ugly and as far from the tone and mood you would think was needed after what happened in Canberra this week.

Through this unpleasantness, another voice, one of reason and genuine understanding, came through.

Victorian Liberal Russell Broadbent, often the canary in the coal mine when it comes to community sentiment the Coalition should heed, had some wise advice for his colleagues and put them down in a letter to Morrison.

“This week marked a moment in our history when many thousands of Australians took to the streets to demand respect, justice and safety for women,” said Broadbent.

“As both an elected representative, and a man, I hear the anger, the hurt and acknowledge the disregard for women that has led to this fork in the road.

“I am horrified at the levels of abuse, intimidation, harassment, discrimination and violence against women in this, our great southern land. Politicians need to be quiet, listen and learn, because actions, not words, count.”

Every Australian can only hope the Prime Minister of the country will listen, any day of the week.

Dennis Atkins: As women demand justice, the PM shows why he’s the wrong man for the job