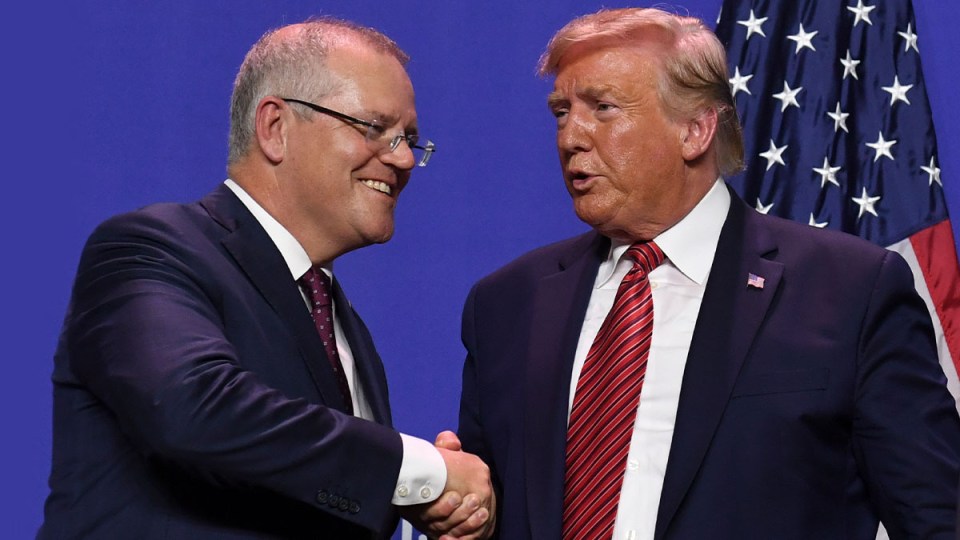 In Scott Morrison's conviction-free zone, protection of democratic values can be traded for the cheers from those who sing your tune.
opinion

Nick Xenophon, one time Senate rebel and South Australian political outlier, has a Scott Morrison anecdote that hits the bullseye in one corner of the Prime Minister’s political world.

He told the tale to The Guardian’s Katharine Murphy and she related it in her Quarterly Essay, The End of Certainty. It starts with a recollection of a moment when the senator and the Prime Minister were together during a Governor-General’s address opening Parliament.

The opportunity is taken by Xenophon to ask the Prime Minister if he’d like to catch up for a coffee. Here’s what transpired, as told by Murphy:

“He looked at me askance and said, ‘What for?’ I said just to catch up and have a chat about issues.

Xenophon laughs at the memory, but he wasn’t laughing at the time. “It was pretty blunt. It was a pretty terse response, basically fobbing me off. I thought, okay. I felt a bit chastised. I thought ‘this isn’t someone you want to shoot the breeze with’.”

It’s worth keeping at the front of mind when considering how and why Morrison avoided anything but the most tepid criticism of Donald Trump for leading an insurrection against the Congressional arm of the US government in a self-obsessed bid to overturn an election he had lost in every way.

Ultimately, Morrison didn’t raise his rhetorical voice against Trump because it wasn’t part of his transactional equation.

His account with Trump, carefully tended throughout his two and a half years as prime minister, was in substantial credit and he wanted to keep it that way. Who might know when he’ll need to make a withdrawal – maybe as soon as late this year when he heads to the polls.

The discussion over Morrison’s lack of moral fibre on Trump – or spine, as former Malcolm Fraser press secretary Alistair Drysdale said so precisely – was itself a lesson in how our Prime Minister plays politics day and night.

Before taking a week’s leave, Morrison said the bare minimum, remarking he was disappointed at what happened in Washington on January 6. The day he returned from leave he added a mild word or two, saying “The things that were said that encouraged others to come to the Capitol and engage in that way were incredibly disappointing.”

It was hardly a condemnation and fell far short of what a range of other world leaders, including conservatives like Boris Johnson, had said.

It was enough, however, to get general praise in the media where Morrison was cheered for “finally” delivering “a strong rebuke”. Trump must wish for such strong rebukes.

By the time Labor’s Anthony Albanese entered the discussion with a somewhat considered speech on the Australia/US relationship, Morrison had enough cover for protection from any Indian bowling at the Gabba.

In this political lob and return, a central point was lost. Morrison didn’t want to comment because he already has those who might – just might – be offended by any criticism of Trump in his calculus for an election victory.

It’s an antipodean version of white identity politics used by the Republican Party and honed by Trump.

You feel the pain, the anger and the anxiety of white voters, predominantly male, and you signal to them without proposing any answers or genuine solutions to what are deep-seated problems.

Morrison did it in 2019 when he rallied a coalition of pro-mining, diesel guzzling, SUV-loving, low tax and small government champions to give him the votes needed in the right parts of the country to get that 75-plus-one seat victory.

If there’s a constituency for Trumpian politics in Australia it’s in those dozen or so Queensland, Western Australian and regional New South Wales seats where voters are in the habit of looking sideways at Labor.

This is standard, textbook political science tactics, but on January 6 the US version of this white identity politics crossed a line that even the hardest Republican traditionalists couldn’t abide.

They followed the battle cry of a grifting, grafting, self-gratifying president into what Yale scholar Timothy Snyder has called The American Abyss.

Reflecting on Snyder’s “post-truth is pre-fascism” thesis, Martin Wolf wrote in The Financial Times this week that Trump was not the disease but a symptom.

“James Murdoch recently declared that: ‘The sacking of the Capitol is proof positive that what we thought was dangerous is indeed very, very much so. Those outlets that propagate lies to their audience have unleashed insidious and uncontrollable forces that will be with us for years’,” wrote Wolf.

Was he referring to Fox News, the poisonous creation of his father, Rupert?

“The role of the right-wing media bubble in creating the post-truth world of Trumpism is evident. So, too, is the plutocrat-funded long march through the institutions. The judiciary this has created has delivered the armed citizenry, the invisible political contributions and the soaring inequality that now endanger democratic stability.”

These are searing analyses from clear-eyed academic and media voices. They cannot be ignored.

That Morrison cannot summon any genuine attachment to real democratic values is shocking but hardly surprising.

He’s a politician who only transacts. If you haven’t got what he wants to benefit his political aims, he has a simple answer: talk to the hand.

In this conviction-free zone, protection of democratic values can be traded for the cheers from those who sing your tune.

What’s in it for me? That’s our ‘purely transactional’ PM’s one and only guiding principle