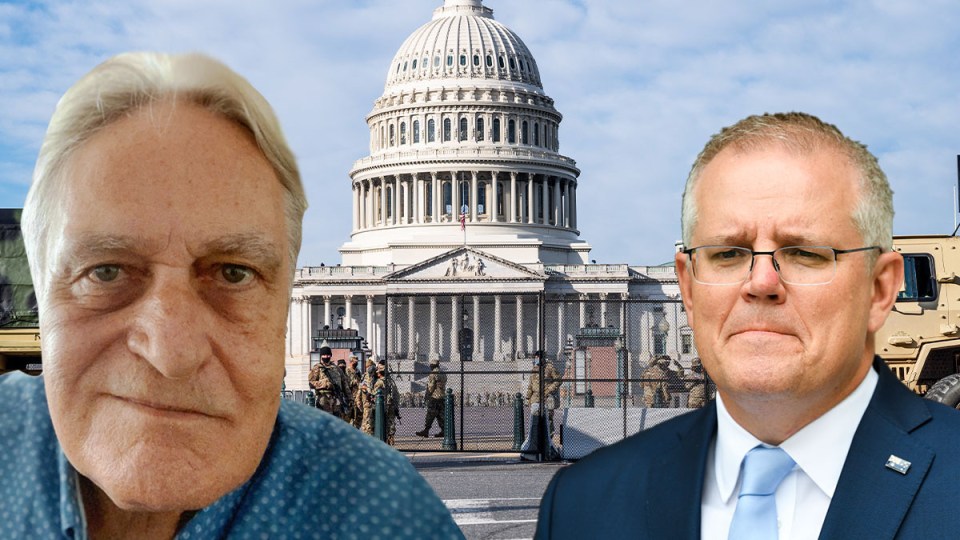 Unlike other world leaders, Scott Morrison failed to condemn agitator-in-chief Donald Trump and the mob who overran the US Capitol.
opinion

As the No.2 in Malcolm Fraser’s press office – David Barnett was top of the heap and Owen Lloyd was the dog’s body – Drysdale was the nice guy who used charm not belligerence.

This past week Drysdale made a small comeback at the sharp end of criticism.

In recent times Drysdale’s observations about politics and life have been deployed on Twitter, irregularly but always of interest.

He is an equal opportunity commentator – he fired off a sharp barb at Queensland’s Labor Premier Annastacia Palaszczuk, for example, when a daughter was denied access to her dying father last September.

This week Drysdale posted one of his most acerbic tweets, aimed directly at the Prime Minister of Australia, the post in whose service he once worked.

“Morrison has been unmasked,” began Drysdale. “His refusal to openly condemn Trump’s behaviour and legacy is the deliberate act of a weak, spineless and character-free Prime Minister.

At a pivotal time in world history, Morrison retreated. He didn’t want to tell the truth for one reason – politics.”

This simple tweet said more about the absence of Morrison on this global shock than any of the tens of thousands of words written here and in other nations.

Morrison said a few words about that assault on US democracy before he took a deserved break on the south coast of New South Wales.

He said the scenes of violence seen in and around the Capitol Building in Washington DC were “very distressing” and he wished for a peaceful transfer of power from Donald Trump to Joe Biden.

Pressed to offer any opinion on the mob who overran the seat of congressional government in the United States and the explicit role of Trump as agitator in chief, Morrison hid behind the coward’s cloak of not commenting on matters in another country.

As if he sticks to that fig leaf of weak confinement even most of the time.

Britain’s Boris Johnson, the leader of a supposedly grown-up democracy said to be most like Trump, singled out the US President: “… so far as (Trump) encouraged people to storm the Capitol and insofar as the President has consistently cast doubt on the outcome of a free and fair election, I believe that that was completely wrong.

“And what President Trump has been saying about that has been completely wrong and I unreservedly condemn encouraging people to behave in the disgraceful way that they did in the Capitol.”

Germany’s Angela Merkel, a constant critic of Trump privately and often publicly, said what happened in Washington made her “angry and sad” and that she regretted “very much” that the President had not admitted defeat in November or again on January 6.

Emmanuel Macron broke with a usually steadfastly held rule in French politics by criticising another world leader – and doing it with a personally issued middle of the night tweet.

Macron said what Trump’s supporters had done was “not American”, adding with a Gallic flourish that the Capitol was “the secular temple of American democracy”.

“France stands strongly, fervently and resolutely with the American people,” said Macron. “We will not yield an iota to the violence of the few who would challenge that.”

Canada’s Justin Trudeau condemned the actions of the mob and said the will of the people must prevail.

“Canadians are deeply disturbed and saddened by the attack on democracy in the United States, our closest ally and neighbour,” Trudeau said in a tweet. “Violence will never succeed in overruling the will of the people. Democracy in the US must be upheld – and it will be.”

Sweden’s Prime Minister Stefan Löfven laid the blame for events on January 6 at the feet of Trump and his backers in Congress.

Ireland’s foreign minister Simon Coveney was also certain where the blame lay: “Shocking and deeply sad scenes in Washington DC – we must call this out for what it is: a deliberate assault on Democracy by a sitting President & his supporters, attempting to overturn a free and fair election! The world is watching! We hope for restoration of calm.”

New Zealand’s Jacinda Ardern was also more direct and forthright than Morrison, posting a sharply worded tweet. “What is happening is wrong. Democracy – the right of people to exercise a vote, have their voice heard and then have that decision upheld peacefully should never be undone by a mob.”

Morrison left for a week’s break this past Monday, four days after the Trump inspired mob stormed the Capitol.

In that period a handful of media appearances turned up little commentary on events in Washington and then it was without backbone.

The Prime Minister will not be able to seek cover when he’s back at work this coming Monday, more so after Trump’s impeachment by the House of Representatives and expected trial in the Senate after Biden’s inauguration.

No doubt Morrison will have a squirrel handy for his favourite “look over there” tactic that he lets go with consummate ease.

It’s past time to name the squirrel strategy for what it is: “The deliberate act of a weak, spineless and character-free Prime Minister,” to quote a veteran and respected servant of the Liberal Party.

Scott Morrison unmasked: What the PM’s cowardly response to the Capitol riots reveals