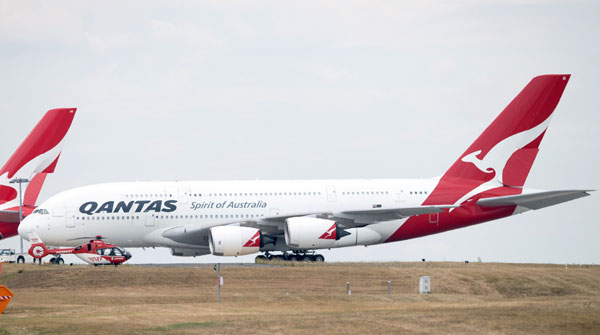 The national cabinet discussed an easing of incoming flights to Australia. Photo: Getty

Scott Morrison was expected to discuss an easing to the limit on inbound air passengers at the meeting with state and territory leaders, as well as expanding the Northern Territory’s Howard Springs quarantine facility.

However desperate Australians will have to wait longer to learn when they might be able return home after those talks were postponed.

Mr Morrison’s office confirmed the prime minister, who is in Queensland, was unable to attend due to “some technical problems that have prevented the Prime Minister’s return to Sydney”.

The meeting has been rescheduled for next week on a date still to be determined.

It is believed the problems that grounded the Prime Minister in Queensland relate to the operation of an RAAF plane. It was also reported that Cairns does not have a secure video facility where he could attend the national cabinet.

The last national cabinet meeting was held in mid-September, with a fortnightly meeting at the beginning of October cancelled due to its proximity to the federal budget.

An announcement was expected to have been made in Sydney by the Prime Minister that the Howard Springs facility near Darwin would accommodate a large number of international arrivals for a mandatory two-week quarantine period.

“The Morrison government has been working with the NT government to finalise arrangements to use Howard Springs for quarantine to enable more Australians to return from overseas,” a prime ministerial spokesperson told AAP.

Space has become available at the facility due to a reduced number of domestic travellers requiring quarantine.

Mr Morrison was expected to provide further details of the arrangement at Friday’s national cabinet meeting.

“There have been extensive preparations undertaken on that matter. We’re in the final stages of concluding those arrangements,” the Prime Minister told reporters in Cairns on Thursday.

More than 29,000 Australians have told the government they want to return home but are stuck due to the COVID-19 pandemic.

Mr Morrison said more than a quarter of 4000 Australians considered to be vulnerable had returned home in recent weeks.

“We’ve been working now for some months as we’ve been getting more and more Australians home, particularly those in vulnerable situations,” he said.

Special Qantas flights from London and India were expected to start from next week, while the federal government is also set to lift the cap on international arrivals.

The National Cabinet postponement has avoided a potentially awkward encounter between the Prime Minister and at least some of the state leaders.

NSW Premier Gladys Berejiklian may have welcomed a distraction from the increasingly dangerous revelations of her personal life at the NSW ICAC inquiry.

Mr Morrison may have been glad to draw attention away from the awkward situation he found himself in this week as he campaigned alongside Queensland Liberal leader Deb Frecklington, just as she was embroiled in a donation scandal.

While Queensland Labor Premier Annastacia Palaszczuk would have found herself in an uncomfortable spot, discussing strategy with Mr Morrison – who spent the week talking up her rival ahead of the October 31 state poll.

Since the last national cabinet meeting, party leaders in three states face independent inquiries over their actions in the political arena, just as COVID cases pop up nationwide and elections loom in the Australian Capital Territory and QLD.

Victoria’s COVID numbers have plummeted, down to a “stubborn tail”, but the state is not on track to open up widely this weekend, as earlier planned.

Mr Andrews has seen the shock resignation of his top public servant, in connection to the hotel quarantine inquiry.

Ms Berejiklian’s previous Teflon image has been smashed by the ICAC’s Operation Keppel, and the explosive revelations of her five-year secret relationship with the disgraced MP at the centre of the investigation.

Ms Frecklington was embroiled in a donations scandal, as she squares off with Ms Palaszczuk, in the very week Mr Morrison headed north to spruik his budget in the Sunshine State.

Mr Morrison claimed the federal government did not tell states what to do in their areas of responsibility despite the concerted campaign from his senior ministers to end Melbourne’s lockdown.

“I’m not here to give advice or instruction to premiers,” he said.

Ms Berejikilian has weathered two no confidence motions and some uncomfortable encounters in state Parliament this week.

The Premier was under siege again as former MP Daryl Maguire, her former boyfriend, returned to be grilled by the Independent Commission Against Corruption and she endured another brutal question time in NSW parliament.

Mr Maguire confessed to ICAC this week that he secretly directed G8way International, a firm that earned commissions for linking Chinese buyers with Australian businesses, while serving as the MP for Wagga Wagga. He resigned in 2018 in relation to a separate ICAC probe.

Following revelations Ms Berejiklian and Mr Maguire were in a five-year “close personal relationship” from 2015, Opposition Leader Jodi McKay accused Ms Berejiklian in question time of being a “sounding board for corruption”.

She referred to phone conversation intercepts, played in the ICAC, in which Mr Maguire can be heard informing Ms Berejiklian of his $1.5 million debt, various business interests and hoped-for commissions.

Mr Maguire told ICAC on Thursday that Ms Berejiklian was one of the few people with whom he could discuss his debts and their relationship was “on again, off again”.

But Ms Berejiklian denied wrongdoing, twice challenging Ms McKay in parliament to make the same accusations outside – where she would not enjoy parliamentary privilege.