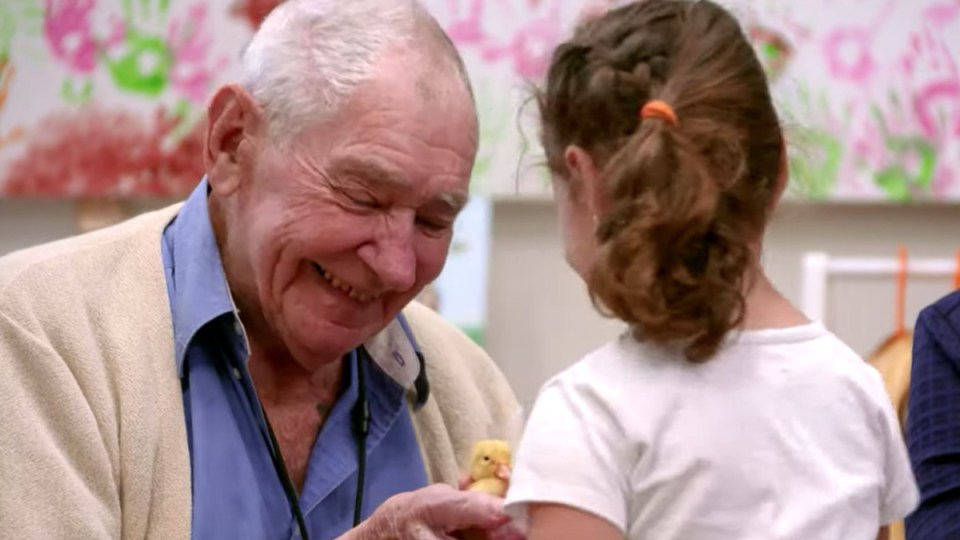 A scene from the ABC's Old People's Home for 4-Year-Olds, which Mr Albanese said could be a model for the future of aged care. Photo: YouTube

Anthony Albanese has called for the TV show Old People’s Home For 4-Year-Olds to be considered as part of the future of aged care in Australia under a plan to create ‘daycare’ for seniors.

In a major speech in Brisbane on Wednesday, the Opposition Leader called for radical solutions for aged care, including more options to allow retirees to stay in their own home but receive support, including ‘daycare’ programs outside the home.

In the hit ABC series, a group of retirees suffering depression and other health issues experienced dramatic improvements after spending structured time with preschoolers.

“Like many of you, the ABC program Old People’s Home For 4 Year Olds made me laugh and made me cry – but it also made me imagine a future of intergenerational care,” Mr Albanese said.

“Imagine a future where we co-locate aged-care facilities, including day respites with kindergartens and preschools? Day respite for our elderly is a missing piece of the puzzle. For many families, they want mum or dad to stay at home or live with them, but they worry about the long days when they are at work.

“Imagine being able to drop your child and grandmother off at the same location.”

Mr Albanese said this could also be a solution to paying aged-care workers more, although he did not explain how this would work.

“The benefits of intergenerational care are immense. It can help our elderly re-engage with the world, minimise their isolation and the effects of their health issues,” he said.

“The government talks of the elderly as though they are a burden – an ‘economic time bomb’, to quote Josh Frydenberg.”

Labor has frequently called for childcare centres to be co-located at schools but this is the first time it has called for aged-care facilities to be incorporated into education facilities.

At a recent private function for Labor MPs, Mr Keating said ACOSS was a “truly no-good organisation” and had given John Howard the idea to introduce a GST.

“The prescriptions of ACOSS and others play into the hands of the Liberal and National parties,” Mr Albanese said.

“Labor supports the legislated increase in the superannuation guarantee to 12 per cent by 2025.

“With economic growth and productivity, you can have both higher super and higher wages. Having established the universal superannuation system we will not stand by and see it chipped away.”