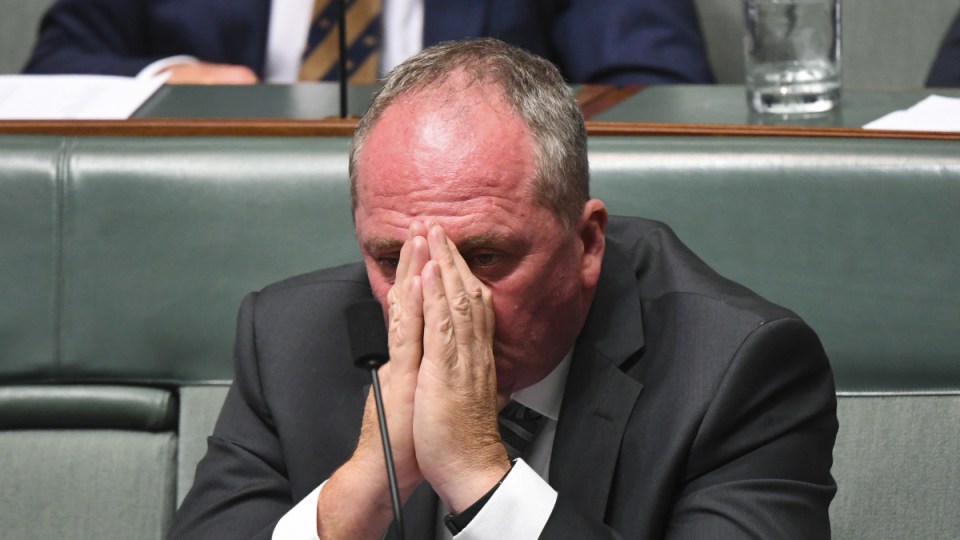 Barnaby Joyce in Parliament on Tuesday during a condolence motion for Australian firefighters. Photo: AAP

At a joint Coalition party room meeting on Tuesday, shortly after losing his renewed pitch for the Nationals leadership to incumbent Michael McCormack, Mr Joyce said his NSW electorate had been dealing with drought and bushfires.

He said some people were trying to push their “hobby horse” issues out of the tragedies.

“We need always to remember those who get hurt from any suggestions and policies when people are pursuing reactionary approaches,” he said.

His comments came just hours after he failed to win back the Deputy Prime Minister’s position in a failed leadership challenge against Mr McCormack.

The comments – on the first day of Parliament for 2020 – were part of a broader discussion between Coalition members about climate change, with some MPs praising Prime Minister Scott Morrison’s increased focus on new technology to cut emissions.

Senator Molan sparked laughter from the TV audience when he told host Hamish Macdonald he was “not relying on evidence” to form an opinion on climate change.

According to The Guardian, several MPs spoke out on Tuesday to demand more ambition on climate change. They reportedly included Katie Allen, Tim Wilson, Fiona Martin and Trent Zimmerman.

Several people told colleagues they must be mindful of what climate policy could mean for jobs.

Others referred to an “ultimate ambition of carbon neutrality” and ensuring Australia became a global leader in renewable energy, hydrogen and working through the recommendations of an inquiry into nuclear power.

Later, Mr Joyce said the Nationals leadership vote was part of the Westminster system and the party could now “move on” from the issue.

Former resources minister Matt Canavan, who quit cabinet to back Mr Joyce, said he wouldn’t seek a return to the ministry.

He said the Coalition had become the parties of workers in coal mines, shipyards and factories.

“We represent those people by fighting for their jobs and defending their jobs,” Senator Canavan said.

After the Nationals’ leadership turmoil, the PM urged colleagues to work together to deliver for Australia.

“We come to this joint Coalition party room to do things together,” Mr Morrison said.

Mr McCormack said MPs and senators should remember that regional Australia was not broken, despite many people hurting after a tough summer.

However, it is believed he survived Mr Joyce’s challenge only narrowly, with reports suggesting the vote was 11-10.

“I shook hands with Barnaby. We will move on,” he said after emerging from Tuesday morning’s leadership vote.

“I support the vote of the room and will strive for the re-election of a Morrison McCormack government as this is definitely the better outcome for Australia and especially of regional people,” he said.