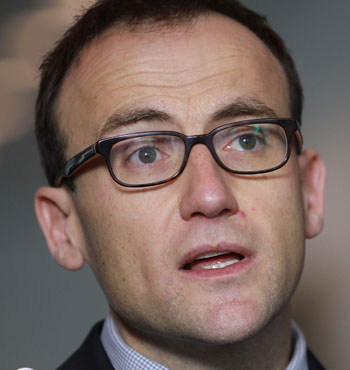 The Greens have elected Adam Bandt to replace Richard Di Natale as leader of the party. Photo: Getty

The only Greens member in the lower house, Mr Bandt was formally endorsed by his federal party room colleagues in Canberra on Tuesday morning.

He has promised to pursue a “Green New Deal” focused on including dental treatment in Medicare, making education free by abolishing public school fees, and replacing fossil fuels with renewable energy.

Mr Bandt aims to win the balance of power in the upper and lower houses of federal parliament at the next election.

In the meantime, he intends to pressure the Morrison government to take stronger action on climate change.

He also claimed big businesses were “killing people” by contributing to a “climate catastrophe”.

Mr Bandt said the Greens would provide “real opposition” and hold the government to account.

He said the major parties were “singing from the same song sheet” on coal mining.

“I’m not one of those people who says that Labor and the Liberals are the same,” he said, shortly after his election to the leadership.

“But when it comes to coal, Labor is now using exactly the same terminology as the Liberals.”

Queensland senator Larissa Waters will remain co-deputy of the party and will share the role with Tasmanian senator Nick McKim. Senator Waters will also be the Greens leader in the Senate.

NSW senator Mehreen Faruqi lost the ballot for co-deputy. She had earlier said she wanted Greens members to have a say over who becomes party leader. She said she was “disappointed”.

Mr Bandt, who joined the Greens in 2004, was elected to federal seat of Melbourne in 2010. He has retained it at subsequent elections, increasing his majority each time.

The first Greens member elected to the House of Representatives at a general election, he was previously a solicitor in industrial law and a partner with Slater and Gordon.

The vote to elect a new leader came after Richard Di Natale said he would stand down to spend more time with his family.

Mr Bandt was the Greens’ deputy leader from 2012-2015, before taking a break to from the role to focus on the arrival of a new baby.

He became co-deputy leader of the party last year.