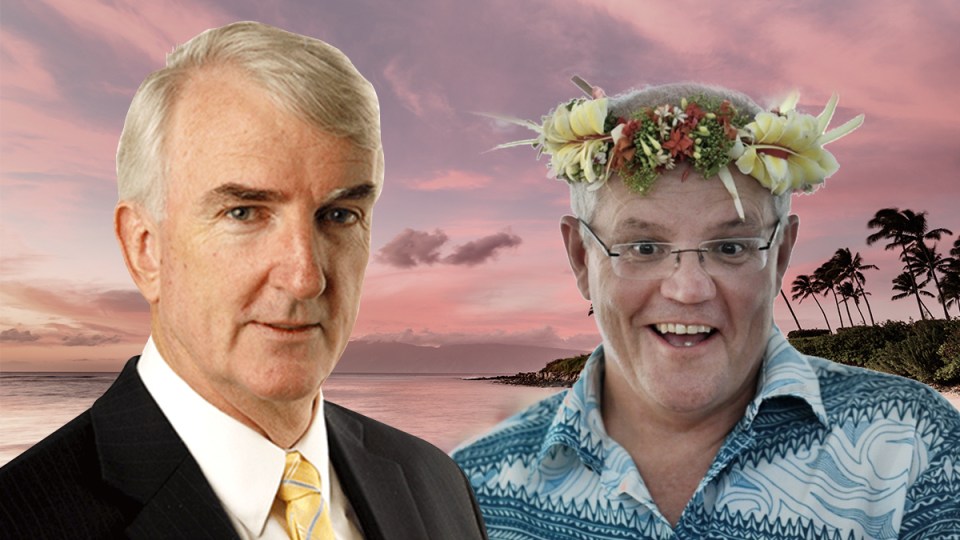 Michael Pascoe is wondering what on earth Scott Morrison was trying to achieve. Photo: TND/AAP
analysis

After trimming his holiday by a day, the Prime Minister Scott Morrison rolled into political action on Sunday and immediately posed a question: Is he deluded or just happily trolling his critics?

“I am comforted by the fact that Australians would like me to be here simply so I can be here alongside them as they go through this terrible time,” Mr Morrison said.

Does he really think that? Is he deluded?

Or is it one of his prepared “talking points” used to flabbergast and annoy opponents, i.e. trolling?

Scott, the criticism that built up about your holiday really wasn’t because Australians wanted you to be here just to be here alongside them, to be ‘here because we’re here’, to hark back to a song of the trenches.

As I’ve previously wondered if the Prime Minister is a nutter, I have to give him the benefit of the doubt and explain the reality he might not have grasped:

Scott, you might like to ‘comfort’ yourself with that thought – though it’s strange that you think you’re the one who needs comforting – but it’s simply not the case.’’

The most obvious reason you were wanted off the Hawaiian beach was the absurd secrecy surrounding your little getaway while the nation was in crisis, the needless lies and deception of your staff about your whereabouts, the suspicion that it looked like you were sneaking off without the usual notification of who would be holding the fort for how long.

It did indeed make it look like you were embarrassed, had something to hide.

And when it comes on top of so much secrecy and obfuscation, when you refuse to be open with the nation from “on-water matters” to “Canberra bubble” to “gossip” to “family matters”, there’s the suspicion building that you’re naturally given to being sneaky and evasive.

Just like the weird business of your attempt to bring Hillsong’s Brian Houston to the White House with you, it was the cover-up more than the initial act that became the bigger worry.

Then there’s the perhaps quaint idea that the Australian PM should present as a leader in a time of crisis, should be able to use the power he has to make a captain’s call about making more money and facilities available to the states, to maybe deploy the hundreds of trained firefighters in the ADF for a start, to represent us to those who have suffered so horribly.

And there’s the matter of volunteer firefighters losing their social security payments.

You could immediately have that fixed. A state Labor MP had a suggestion:

As it turned out, that sort of leadership idea was immediately shown to be silly.

You turned up and just did the photo-ops and the deluded/trolling thing, throwing in an apparently compulsory attack on the opposition, claiming your government was reducing carbon emissions without the “reckless job-destroying and economy-crunching targets that others are seeking to force upon us”.

The bigger issue though came from the idea that the nature and extent of the fires underlined the reality of our climate-changed present and future and that, maybe if you were here witnessing it with the rest of us, you’d seize the moment and at last show some leadership.

Faced with the fire and smoke and the rising tide of anger on the front lines, there was the opportunity to do what Malcolm Turnbull had been unable to do – put the climate denialists back in their box.

It was the chance to stop lying about Australia reducing its carbon emissions, to stop Australia being at the forefront of fighting greater emission reductions, and to announce we – as a nation – would get serious about resourcing our emergency workers and volunteers in the struggle with ever-greater crises.

(Yes, resourcing firefighters is primarily a state responsibility, but a national leader with access to vastly more funds could move quickly to start the process. The increased aerial firefighting capacity, for example, requires federal heft. And there are those ADF firefighters and other personnel…)

But that, too, turned out to be a silly idea.

You remained the man who will be best remembered for bringing a lump of coal into Parliament.

“I do not accept the suggestion that Australia is not carrying its weight,” you said of our attempt to cheat on emission reductions.

You may as well have still been brandishing your precious lump of coal. Looks like you’re a Murdochian climate denialist at heart and in deed.

Not only is Australia insisting on using an accounting trick with non-existent Kyoto “carryovers” to meet its emissions reduction target, it is fighting well above its weight to prevent further global reductions.

As the Financial Times reported: “Australia was one of several nations blamed by activists for the failure of the UN climate talks last week in Madrid to agree on rules for a new global carbon market, which would enable countries to pay each other for projects that reduce emissions.

“If you want this carryover it is just cheating,” said Laurence Tubiana, an architect of the Paris accord.

So in the end, there was nothing positive about you forgoing a day’s holiday while so many volunteer firefighters have been chewing up weeks of their leave, as Rick Morton has reported so well for The Saturday Paper.

With no sign of the hoped-for leadership, it’s not a desire to have you here beside us – it’s more a matter of churlishness that a man who is so much part of the problem should be holidaying while the nation suffers.

Laurie Oakes’ summary of the sorry performance was spot on.

He might as well rack off back to Hawaii then. https://t.co/1k6cWXmbq6

Earth to Scott Morrison! Michael Pascoe gives the PM a dose of reality after Hawaii