James Robertson Political Editor
6:00am, May 17

Labor enters the final days of the campaign within reach of claiming a narrow majority but faces a fraught run home as its support falls and voters desert the major parties.

An exclusive Roy Morgan poll finds Labor ahead of the Coalition after preferences by 53 to 47 per cent, a drop in its headline support of 1.5 points.

This would represent a swing of 4.5 per cent toward the Opposition since the last election and its strongest share of the vote since the 1983 election.

But beneath the headline figure the poll finds much shallower underlying support for Labor partly caused by voters spurning the major parties in record numbers.

“There is still the prospect of Australians waking up to a hung Parliament on Sunday morning,” Roy Morgan chief executive Michele Levine said.

“It is more important than ever for the ALP to finish strongly in the last few days of the campaign.” 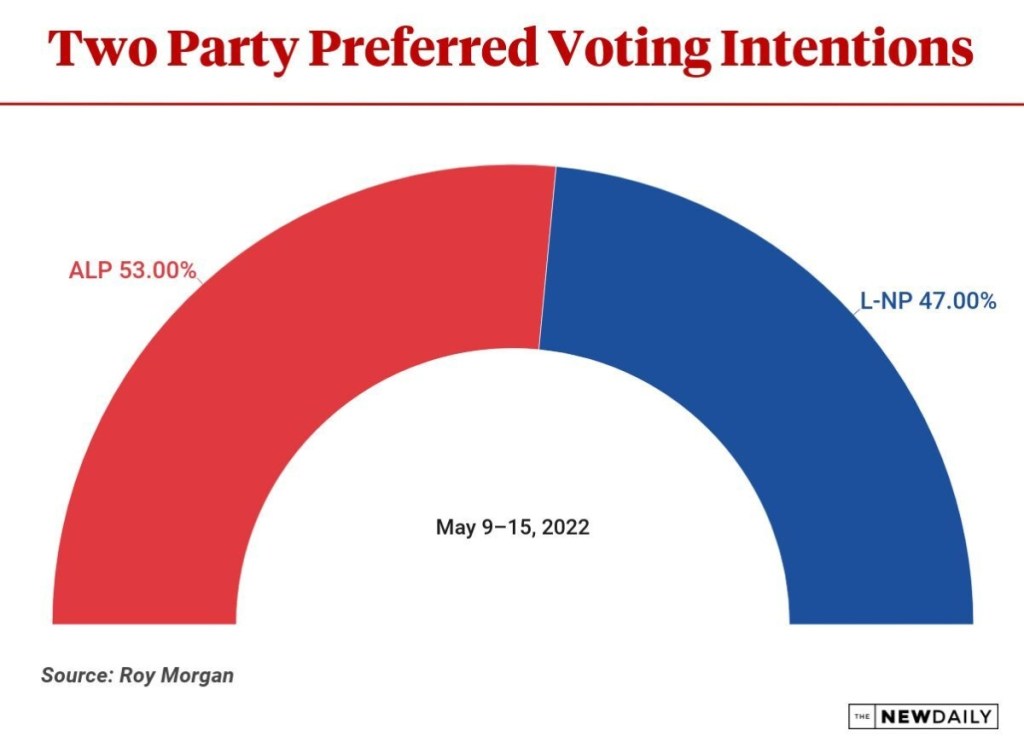 Such a shift in support to Labor would notionally deliver the party, accounting for the concentration of its support in different states, a gain of up to ten seats, or two more than needed to command a majority on the floor of Parliament and provide a Speaker.

But election swings are not uniform; even if such projections were replicated nationally only a few seat contests would need to buck the trend to frustrate Labor’s ambitions to govern in its own right.

The penultimate poll of the campaign finds changes in voter behaviour and party support even more likely to worry the Opposition.

Such levels, Ms Levine notes, would represent a record low in major party support not seen since Labor was pipped at the post by the Anti-Socialist Party in 1906.

The poll finds that 32 per cent of voters surveyed will direct their first preferences to a minor party or independent.

“The high level of support for minor parties and independents means the cross bench after the election could be the largest we have seen in Australia for decades,” Ms Levine said.

“If the ALP fail to secure a majority of seats in the House of Representatives there could be eight or nine or even more cross-benchers to deal with.”

Support for the Greens has held steady compared to last week at 13 per cent, or levels that would exceed the party’s performance at the 2010 election.

The proportion of voters intending to vote for Other Parties rose by 1 point to 5 per cent and those backing independents rose by 0.5 points to reach 9 per cent.

No change in support was recorded for the United Australia Party at 1 per cent or One Nation at 4 per cent.

The proportion of voters declining to say fell 1 point to reach 6 per cent.

The online and telephone poll of 1366 was taken between last Monday and Sunday, a week when ALP leader Anthony Albanese was first criticised for backing a pay rise for workers before he made it a central campaign message.

The Morgan poll allocates voter preferences based on their flow at the last election.

Using smaller samples, state-by-state results have Labor in front except in Queensland and South Australia.

They show Labor holding onto an edge in Western Australia, a vital state in which Mr Albanese is again campaigning as the party seeks to flip three seats in a state that typically breaks for the Liberals.

On Monday Mr Albanese faced an election-eve fight over housing affordability and a Coalition plan to let people use superannuation to buy homes and a row over policy costings while campaigning in Perth.

The government’s campaign launch pledge has drawn a sharp philosophical divide between the two parties in the final week of the campaign.

Mr Albanese welcomed a “contest of ideas” over what he said was a policy that would detract from future generations’ wealth and retirement living standards.

But Ms Levine said data suggested the Coalition pitch could yet lure voters.

“Although the effectiveness of the Coalition’s new housing policy is yet to be seen, when Roy Morgan asked whether Australians in financial difficulty should be able to access up to $20,000 of their superannuation money during the early stages of the COVID-19 pandemic – a large majority of 79 per cent of Australians agreed they should be able to do so,” Ms Levine said.

The ALP has not won more votes than the Liberals in WA since Bob Hawke was prime minister.

But while the Labor camp flew a long way to campaign in each on Monday, Mr Albanese played a conservative hand and only spent, cumulatively, not much more than an hour in front of the travelling press.

Such tight management is the norm for modern campaigns, which focus mostly on generating positive televisual images.

Mr Albanese and the premier spoke to nurses in Swan before they announced a jointly funded, $150 million hospital upgrade.

The Labor leader played in the sandpit in a moment with enough potential for puns to launch a week of TV news reports, while earlier children saw him approaching and promptly turned on their heels.

Extending child care coverage to a claimed 95 per cent of Australian families is key to Mr Albanese’s election platform and, he hopes, his future legacy.

At a press conference Mr Albanese deflected questions about the effect of his program on the budget bottom line and the release of costings of his policy to prove it.

Oppositions generally have a chequered record on releasing their policy costings.

Last election Bill Shorten provided modelling about the cost of his policies more than a week before the election. In 2010 and 2013, complete Coalition costings were provided days before election day.