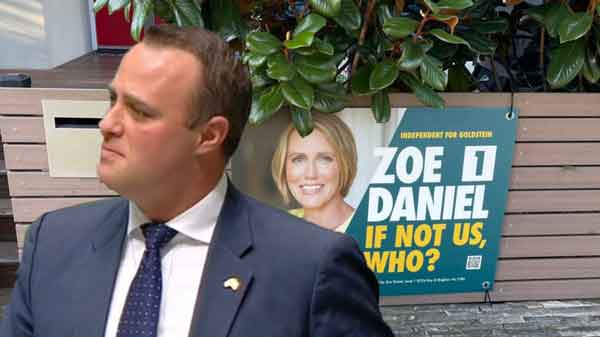 The council has knocked back Mr Wilson’s claim that such displays of support – popping up with increasing frequency in the affluent inner-Melbourne electorate – are illegal outside of an election campaign.

“We are within (from 21 February) the period in which an election must be held,” the council said in a statement on Wednesday afternoon.

“A permit is not required for a sign smaller than [five square] metres.

“Council has received complaints in relation to candidate signs installed prior to 21 February. However, no fines have been issued.”

Mr Wilson represents the increasingly marginal and formerly-blue ribbon seat of Goldstein in south-east Melbourne, and is an outspoken proponent of a small government philosophy.

This week it emerged he had urged his constituents to dob in neighbours for displaying political advertisements in support of Ms Daniel.

The New Daily revealed earlier on Wednesday that Mr Wilson had urged a crackdown on supporters of Ms Daniel, a respected former ABC foreign correspondent and TND columnist, by writing to constituents encouraging them to report her supporters for displaying what he claimed were illegal signs backing her.

“I feel sorry for those households about to be fined nearly $1000 each in involuntary campaign expenses because their candidate is knowingly encouraging them to break the law,” he told The New Daily on Tuesday.

After the council’s statement on Wednesday, Mr Wilson denied the advice contradicted his statements about the legality of the pre-election signs that are popping up on fences in his electorate.

“The advice from council is about the erection of signs,” he said, in a brief response to queries from TND.

Mr Wilson also said the council would amend its advice because it “has realised they have been misled that the last day of House election is 21 May”.

The last date for a normal house and half-Senate election is May 21.

But Ms Daniel said Mr Wilson’s email to Goldstein constituents, which offered a Parliament House email address to which complaints could be reported, amounted to “bullying and intimidation”.

“It highlights the importance of Goldstein electing a member with safety for women at work, in the home and in the community as a top priority,” she said in a statement.

Mr Wilson is one of many Coalition MPs facing challenges from women candidates and so-called teal independents, who combine traditional Liberal philosophy with a focus on climate change.

In addition to Goldstein – which is a formerly very safe Coalition seat now held by a margin of about 7.8 per cent – former Liberal strongholds in Kooyong, and the Sydney seats of Wentworth and MacKellar are also facing similar challenges.

The candidates have the backing of the activist fundraising group Climate 200.