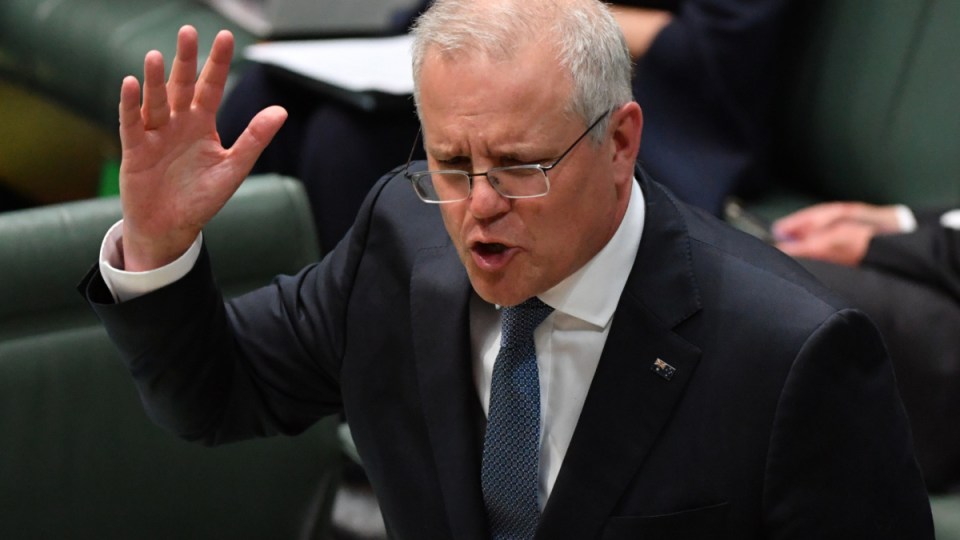 In a joint party room meeting this week, Prime Minister Scott Morrison told his colleagues they were about to see him pour his energies into political debate as he never had before.

And, it seems, he really meant it.

Mr Morrison told MPs they needed to let him lead the way and take the government across the finish line at the next election, a Liberal Party source told The New Daily.

Were Mr Morrison to pull off such an improbable victory, Health Minister Greg Hunt earlier that fortnight told MPs the PM would claim a place in the Liberal Party pantheon – even, he said, above John Howard.

Mr Morrison certainly stayed true to that script in a week of Parliament that was dedicated to the non-stop rollout of election tactics and very little else.

And he certainly campaigned as if he had one eye on the history books, borrowing mostly, it would seem, from the very top of the Liberal Party’s Mount Olympus.

The government’s week reached its crescendo with a boldly ahistorical attempt to frame itself as running against the threat of communism, a ploy reminiscent of the Menzies era.

Back to the future

But by week’s end Mr Morrison’s Cold War rhetoric was already overpitched before an election had even been called.

Mud slung at Labor, previously made in coded terms about having a “bet each way” on national security did not take long to morph into the most old fashioned of negative campaigns.

By mid-week, Mr Morrison made – and withdrew – the accusation that Labor’s deputy, Richard Marles, was a “Manchurian candidate”. The ALP’s leader, Anthony Albanese, was derided for being the “preferred” candidate of the Chinese government. And Peter Dutton repeated a baffling comparison between the Chinese government and Nazi Germany.

The result was a perceptible drop in tempo. The government continued its attempt to whip up fear about a Labor government on Thursday and Friday, but on more traditional and palatable terms such as past funding of the defence forces.

Mr Morrison used the office of the Prime Minister of Australia to take a risk this week. His charged rhetoric about Australia’s largest trading partner risks exposing him to a public perception of a leader prepared to burn the house down for political advantage.

But has it paid off, by the cynical standards of political tactics?

Being so reprimanded by authoritative voices on overstepping the bounds on national security has not burnished Mr Morrison’s prime ministerial image.

In a very narrow sense, though, there are those who will be chalking this week up as a success. The government’s politicisation of national security imbued almost every step it took this week.

There were attempts to divide Labor over plans to needlessly beef up deportation powers; to list the political wing of Hamas as a terrorist organisation; and introduce higher minimum sentences for firearms.

Despite hot rhetoric accompanying each, and with no pressing or convincing case made for taking any of those measures, Labor resisted the obvious bait and did not oppose them.

The government may not have scored any body blows, but it has successfully redirected the debate.

Mr Morrison began the fortnight with question marks over his leadership and the government’s unity, following a series of disastrous leaks against him.

Against this backdrop, putting issues other than Coalition unity front and centre is a positive for a government now approaching ten years in power and very much looking it.

But Mr Morrison has not gone so far as to shift the spotlight onto Labor, something he managed to great effect at the last election.

Whether staking so much of his credibility on changing the national conversation has been worth it is far from clear.

Madonna King: We deserve more from our leaders than a tussle between two brands of timid
Western Australia brings forward border reopening to March 3
Today's Stories