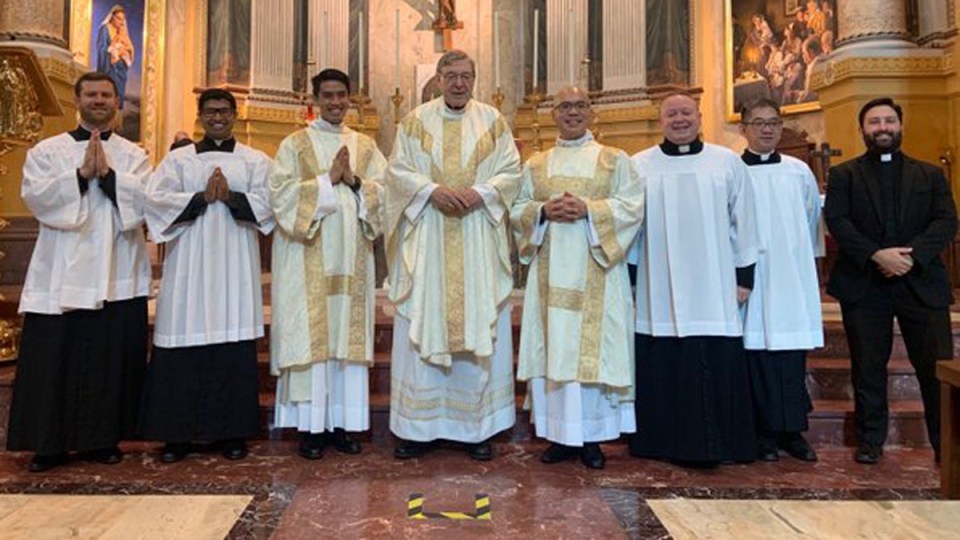 George Pell has conducted his first public mass in Rome since returning to the city less than a month ago after being acquitted on sex abuse charges.

Cardinal Pell led a service at the weekend to mark the 10th anniversary of the canonisation of Mother Mary MacKillop, Australia’s first saint.

Among the congregation of just 45 invited guests at the mass in the chapel of Domus Australia, near Porta Pia, was former Australian prime minister Tony Abbott, a long-time friend and supporter of the cardinal.

According to Catholic publication America Magazine, Mr Abbott – who now has a trade role for the British government – “happened to be in town on other business”. Among the other guests, all there at the invitation of the Australian embassy in Rome, were the US ambassador to the Holy See, Callista Gingrich, and her husband, Newt, the former speaker of the US House of Representatives.

Sunday’s mass came just days after 79-year-old Cardinal Pell met the Pope for the first time since returning to Rome on September 30.

Cardinal Pell left the Vatican in July 2017 to face the sex abuse charges. He was freed from a Victorian jail earlier in 2020 after his convictions were quashed by the High Court.

Last week’s meeting was seen as a clear indication that Pope Francis wanted the world to see he remained on good terms with Cardinal Pell, despite the Australian’s troubled history.

The Vatican released a short video of the pair smiling and shaking hands, in which Pope Francis can be heard saying “good to see you” and “more than a year” – an apparent reference to Cardinal Pell’s time in jail.

The men then posed side-by-side for photographs.

During Sunday’s mass, a prayer was said for Tim Fischer, the former deputy prime minister and Nationals leader who oversaw the canonisation of Mother Mary MacKillop when he was Australia’s representative to the Holy See.

Mary MacKillop was born in Melbourne in 1842 and was canonised in 2010. She had founded the Sisters of St Joseph of the Sacred Heart and established schools for the poor throughout Australia.

America’s Vatican correspondent Gerard O’Connell said Cardinal Pell did not refer at the mass to his trial or acquittal. He said there has been speculation the Cardinal might remain in Italy until he turns 80 in June 2021.

In April, after he was absolved by the High Court, Cardinal Pell said he wanted to return to Rome to clean out his Vatican apartment.

When he arrived on September 30, it was straight into a swirling financial corruption scandal implicating a half-dozen Holy See employees including one of his Vatican nemeses, Cardinal Angelo Becciu.

The pair have long had a stormy relationship.

Through his lawyer, the Australian man who accused Cardinal Pell of sexually abusing him two decades ago also denied reports speculating that he might have been bribed to testify.