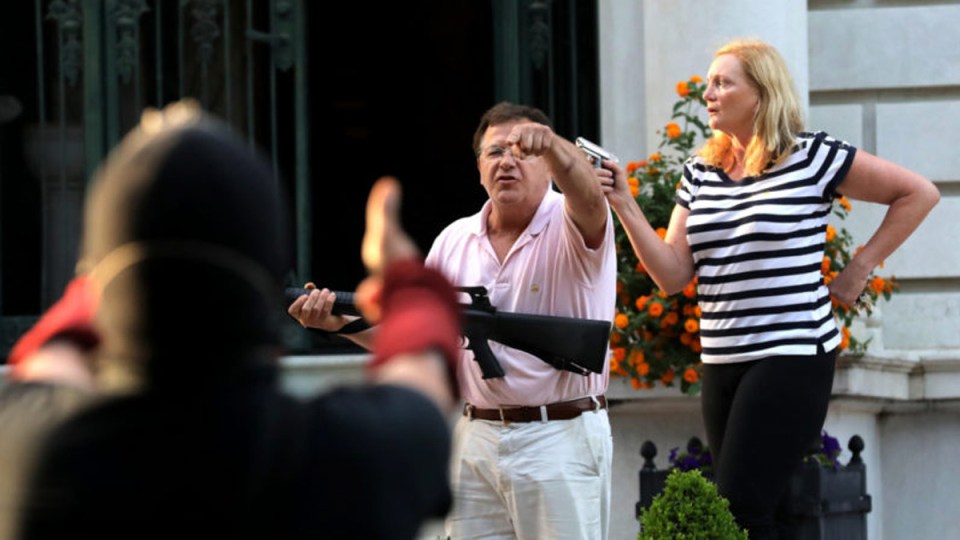 The American couple famous for pointing guns at Black Lives Matter protesters outside their St Louis home have been indicted on weapons and tampering-with-evidence charges.

Mark and Patricia McCloskey, who are both lawyers, became folk heroes among some American conservatives after video footage of the June confrontation went viral.

In the footage, the couple are shown standing outside their $US1.15 million ($A2.14 million) home in a gated St Louis estate, each brandishing a firearm – an AR-15 rifle for him, a handgun for her.

In interviews after the incident, Mr McCloskey said he and his wife were “scared to death”.

“This is all private property,” he told KMOV4 local news.

“There are no public sidewalks or public streets. I was terrified that we’d be murdered within seconds, our house would be burned down, our pets would be killed. We were all alone facing an angry mob.”

He told another local TV network he and his wife were confronted by an “absolute horde”.

Protesters have said that a gate to the street was open, but the McCloskeys claimed that demonstrators broke through.

According to Politico, a police statement said protesters feared “being injured due to Patricia McCloskey’s finger being on the trigger, coupled with her excited demeanour”.

St Louis Circuit Attorney Kimberly Gardner had charged the couple with unlawful use of a weapon in July. The grand jury added the tampering-with-evidence charge on Tuesday.

On Tuesday (local time), their lawyer, Joel Schwartz, said a grand jury had voted to indict the couple.

The McCloskeys argue that they were simply exercising their right to bear arms, and were protected by a Missouri law that allows the use of deadly force against intruders.

Outside court on Tuesday, an angry Mr McCloskey lashed out at the protesters.

“Every single human being that was in front of my house was a criminal trespasser,” he said.

“They broke down our gate. They trespassed on our property. Not a single one of those people is now charged with anything. We’re charged with felonies that could cost us four years of our lives and our law licences.”

In September, St Louis police issued summonses to nine protesters for trespassing onto a private street during the incident. Spokesperson Evita Caldwell told The Associated Press at the time that authorities were still deciding whether to file formal charges.

President Donald Trump is among the couple’s defenders, claiming they were “going to be beat up badly if they were lucky”.

Missouri’s Republican governor Mike Parson has said he will pardon the couple if they are convicted.

Soon after the incident, they were also invited to speak at the Republican National Convention in August, where Ms McCloskey claimed that if Democratic presidential nominee Joe Biden won the November election it would “bring crime, lawlessness and low-quality apartments into now-thriving suburban neighbourhoods.”