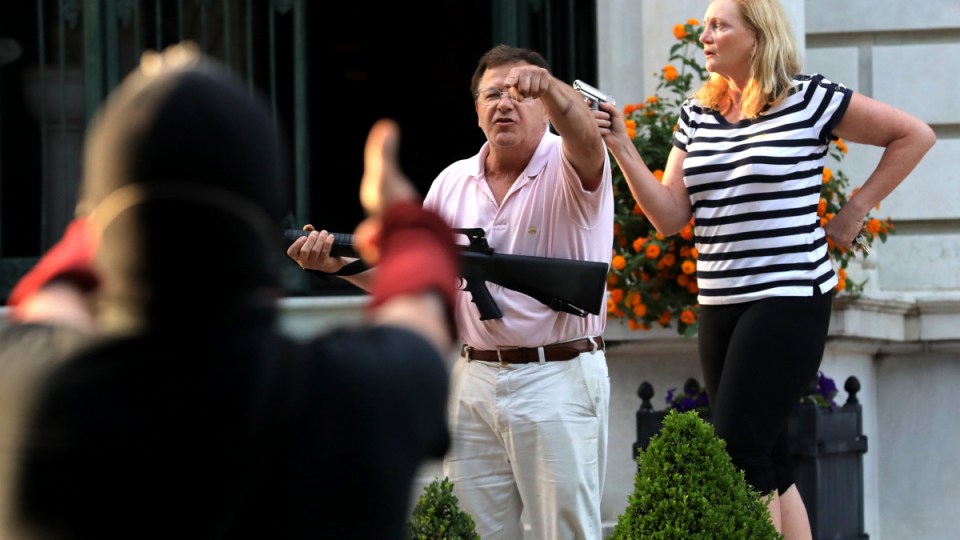 Authorities in the US city of St Louis are investigating after two married lawyers aimed guns at protesters who walked past their house at the weekend.

Mark and Patricia McCloskey are seen in multiple videos aiming their weapons at the protesters – an assault-style rifle for him, a semiautomatic pistol for her (it is not clear if either was loaded).

Mr McCloskey and his wife are both personal injury lawyers who live in a mansion in the city’s wealthy Forest Park neighbourhood. He said they feared for their lives and that Black Lives Matter protesters had damaged a wrought-iron gate at an entrance to their gated community.

“There are no public sidewalks or public streets. I was terrified that we’d be murdered within seconds, our house would be burned down, our pets would be killed. We were all alone facing an angry mob.”

He told another local TV network he and his wife were confronted by an “absolute horde”.

“As soon as I said ‘this is private property’, those words enraged the crowd. Horde, absolute horde came through the now smashed down gates, coming right at the house,” he said.

“These people were right up in my face, [I was] scared to death.”

Some of the videos of the McCloskeys have millions of views, and the incident gained even more attention when US President Donald Trump retweeted it at the weekend.

Mr Trump shared footage from the US’s ABC News showing the couple responding to black and white protesters marching past their mansion to the nearby home of St Louis Mayor Lyda Krewson.

In the footage and elsewhere, some protesters can be seen pausing to film or snap pictures of the McCloskeys, while others shout, “Keep moving” and “Let’s go”.

The group was marching to Ms Krewson’s house to demand her resignation after she read out the names and addresses of people calling for police reform in a Facebook Live event last week. The mayor has since apologised and removed the video.

St Louis’ chief prosecutor Kimberly Gardner said she was alarmed by the videos and her office was investigating.

“We must protect the right to peacefully protest and any attempt to chill it through intimidation or threat of deadly force will not be tolerated,” she said.

Later, the McCloskeys’ lawyer, Albert Watkins, said they were long-time civil rights advocates and supported the message of the BLM movement.

He said they grabbed their guns when two or three white protesters threatened them and their property.

On Sunday, Mr Trump drew swift condemnation for retweeting a video of a Florida supporter shouting “white power”, a phrase used by white supremacist groups, and later deleted it. The White House said Mr Trump had not heard the slogan.

Mr Trump also blasted Princeton University’s weekend announcement it was removing former US president Woodrow Wilson’s name from its schools because of his his racist remarks and policies.