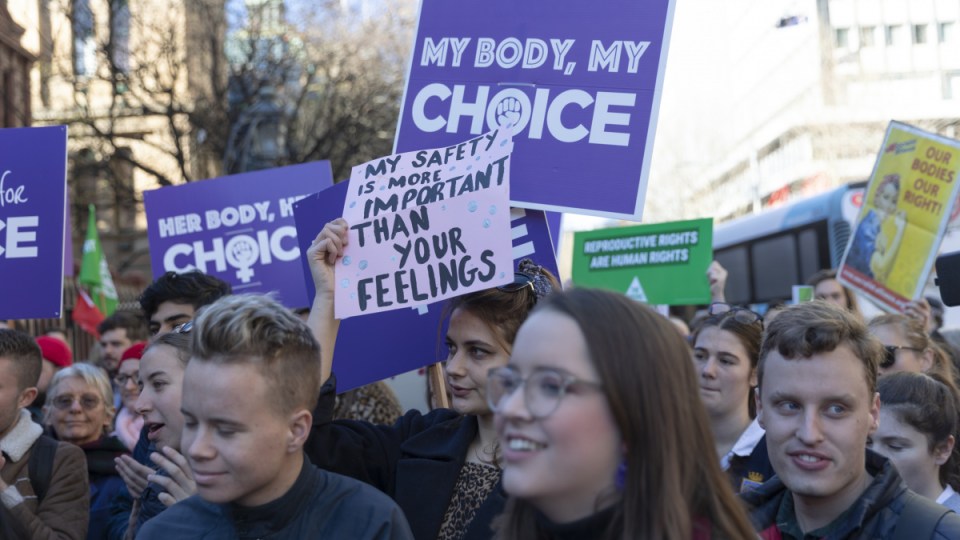 Australian women won't allow their hard-won right to control their bodies be taken away. Photo: Getty

The blow dealt by the US Supreme Court limiting access to safe abortions has shone a light on the situation in Australia as protesters take to the streets in solidarity.

Thousands of pro-choice advocates marched in Melbourne and Sydney on Saturday, and in Brisbane and Adelaide on Friday, demanding free abortions and more accessibility to health services for women and pregnant people.

Event organiser and MSI Australia managing director, Jamal Hakim, estimated that up to 10,000 protesters showed their support in Melbourne.

“Melbourne really showed out with the weather and with people as well. There was so much passion and solidarity,” Mr Hakim said.

“It was really terrific to see so many people, the State Library was full and Swanston Street was full all the way down. It just shows how this topic brings people together, because it’s about the bodily autonomy of women and pregnant people and it really comes to the core of healthcare rights as well.”

People of all ages and genders gathered in Melbourne’s CBD as part of a movement sparked by the Supreme Court of the United States (SCOTUS) decision to overturn Roe v Wade, that has seen 27 US states move toward either banning or threatening to criminalise abortions.

In several US states clinic closures have already begun.

Abortion is currently legal in states and territories across Australia under different circumstances. However, in WA, it is still regulated by the criminal code which has long drawn criticism.

Hundreds of protesters attended Sydney’s rally, organised by social justice activist Hersha Kadkol, who was thrilled to see people coming together for the cause.

“I think the fact that people wanted to demonstrate in the pouring rain is a really good indication of where people are at in Australia, in the fight for our rights,” Ms Kadkol said.

“Even though abortion is legal, or off the criminal code, it’s not exactly easy to access because it is expensive and depending on where you are, it’s very hard to access an abortion provider.

“We want to say that abortion should be free, safe, legal, on demand and also without apology because of course in WA, you still have to ask permission from two doctors to get an abortion at all.”

Mr Hakim said there were fears of “anti-abortion” sentiment being bolstered in Australia after the SCOTUS ruling.

“What happened in the US is going to have an impact on every single woman and pregnant person across the world,” he said.

“It means anti-choice movements will now be bolstered, they will be looking for ways to attack those fundamental rights.”

Protesters are also expected to voice discontent in Perth, Hobart, Wollongong and Rockhampton on Saturday, and in Launceston on Sunday.

While much of the attention is on America, there is still work to be done on abortion access at home, contraception and safe abortion providers, MSI Australia says.

“The events taking place in the US are devastating for human rights. Fortunately, we are not at risk of having abortion bans in Australia but we do need increased access and equity to abortion care services,” Mr Hakim said.

While the Federal Government supports abortion rights, people without access to public funded services request financial support on a weekly basis, he said.

Roe v Wade was a landmark 1973 decision where the SCOTUS ruled the US Constitution protected a person’s liberty to have an abortion.

It was overturned by the conservative majority court last month – paving the way for US states to go their own way.

The sound of summer cricket is about to change as Ian Chappell retires after 45 years
France can ‘trust me’ after subs rift: Albanese
Today's Stories

Australians take to the streets to defend safe and legal abortions