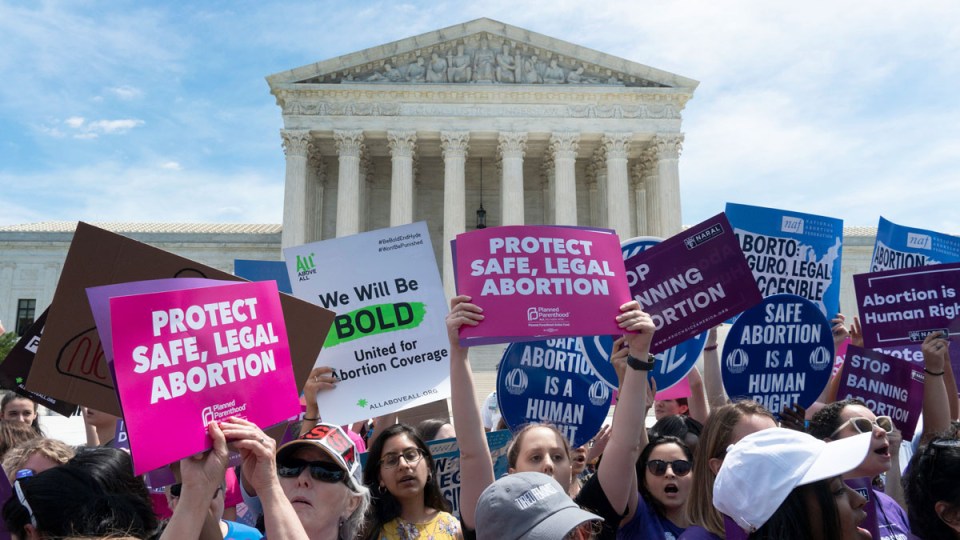 The protests began outside the US Supreme Court and have spread from coast to coast. Photo: Getty

The top courts in Texas and Ohio have allowed the Republican-led states to enforce restrictions and bans on terminating pregnancy after the US Supreme Court last week sparked global protests by overturning the nationwide constitutional right to abortion.

The order, which allows the law to be enforced civilly but not criminally, came the same day the Ohio Supreme Court gave the state the go-ahead to enforce a 2019 ban on abortions from six weeks of pregnancy.

The dual orders came one week after the conservative-majority US Supreme Court restored states’ authority to ban abortions, triggering a flurry of lawsuits seeking to preserve the ability of women to terminate their pregnancies.

The Texas Supreme Court acted in response to a request by Republican Attorney General Ken Paxton to put on hold a temporary restraining order issued by a judge on Tuesday that allowed abortions to resume in the state up to the already-restricted six weeks of pregnancy.

Lawyers for the abortion clinics who challenged the 1925 ban vowed to continue fighting.

“We won’t stop fighting to ensure that as many people as possible, for as long as possible, can access the essential reproductive health care they need,” said Julia Kaye, a lawyer with the American Civil Liberties Union representing the Texas abortion clinics challenging the ban.

Some states on hold

Abortion rights groups have since last week challenged anti-abortion laws in 11 states, with judges in Florida, Louisiana, Kentucky, and Utah preventing restrictions or bans from being enforced.

In New Jersey, Governor Phil Murphy signed legislation designed to allow women who venture to the state seeking abortions to do so without fear of prosecution or civil litigation from their home state.

The New York Senate passed an amendment to the state Constitution to codify the right to an abortion, as well as the right to contraception.

Roe had guaranteed a national right to end any pregnancy up until the time of fetal viability outside the womb – generally between 24 and 28 weeks of gestation.

Also on Friday, Planned Parenthood and other abortion providers brought a lawsuit before the Oklahoma Supreme Court challenging two state abortion bans, one from 1910 and one passed this year.

Oklahoma Attorney-General John O’Connor did not immediately respond to a request for comment.

The Oklahoma Supreme Court, in an 8-1 ruling on Tuesday, allowed another abortion ban in the state to take effect.

The company said the location history of a Google account is off by default.

Effective in the coming weeks, for those who do use location history, entries showing sensitive places including fertility centres, abortion clinics and addiction treatment facilities will be deleted soon after a visit.