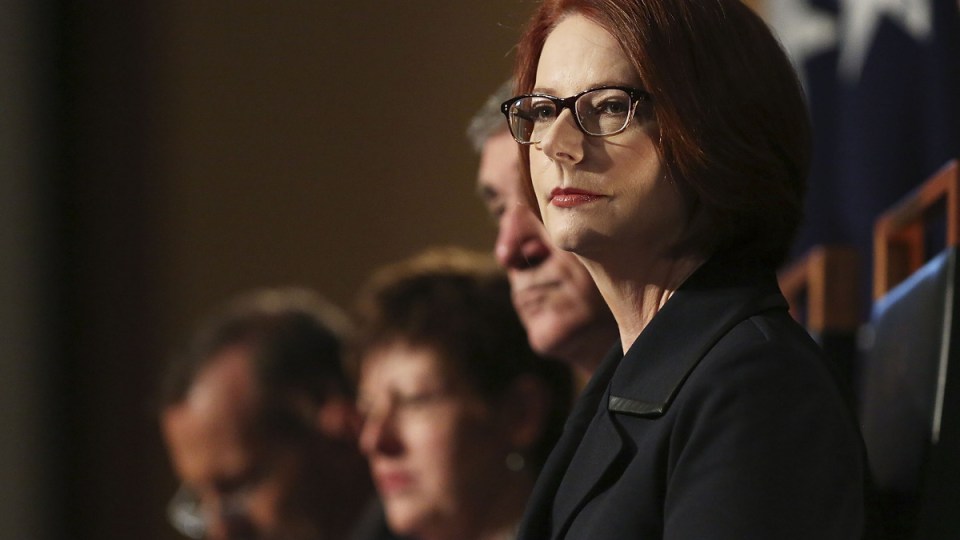 Former PM Julia Gillard says she was treated differently because of her gender. Photo: Getty

Julia Gillard said the sexism she endured as Australia’s first female prime minister only worsened during her time in the role.

From being asked on a Perth radio program if her partner was gay, to discovering a Liberal National Party fundraiser menu had served a ‘Julia Gillard’ quail (featuring “small breasts, huge thighs and a big red box”), Ms Gillard said the criticism she faced became “more gendered over time”.

“The most sexist thing that happened to me in politics was the then-leader of the Opposition (Tony Abbott) standing in front of signs that described me as a witch and a bitch, and making no attempt to get people to take those signs down,” the former prime minister said.

The 30-minute program airs at 8pm on Tuesday and shows how sexist attitudes still plague women in Parliament eight years after the incident with Mr Abbott.

The program features a number of ‘firsts’, such as Ros Kelly becoming the first federal MP to give birth while in office in 1983.

“She was terrified people would think she was slacking off … Now, there’s a huge range of women combining parenthood and a parliamentary career.

“The fact they can do it is partly because Ros Kelly did it first.”

Other firsts include Bronwyn Bishop becoming the first Liberal woman popularly elected to the Senate in New South Wales in 1987.

But despite the leaps made by female politicians over the past 100 years, the personal accounts of sexual harassment and sexism revealed in the series show Australia still has a long way to go.

Former Liberal MP Julia Banks describes the moment a male colleague slid his hand up her thigh, while Kate Sullivan – one of Australian Parliament’s longest-serving women – revealed her own allegation of sexual assault on the Ms Represented podcast after being inspired by young Liberal staffer Brittany Higgins.

“I can understand how … sexual harassment, and how sexual assault and, sadly, how rape can happen in that place,” Ms Banks said on the program.

“That’s what makes (Parliament House), in my view, the most unsafe workplace culture in the country, when it should be the most safe and secure.”

Dr Marika Guggisberg, an expert in domestic, family and sexual violence at Central Queensland University, said she was unsurprised by the slow pace at which Australian Parliament was inching toward gender equality.

“That is something that is very ingrained in our society.”

Dr Guggisberg said there was a “continuous backlash” against feminism in Australia, as evidenced by the response to the #MeToo movement, which featured “very loud male voices, and sometimes even female voices, criticising women who speak out on women’s issues”.

“Sexual violence in any form and shape seems to still be a taboo topic because of the widespread misconception that it is a very rare occurrence,” she said.

“Women who speak up may very well suffer great loss, not just in terms of reputation. They could lose their job, and get dragged through the mud by the court of public attitudes.”

A growing number of women across the political divide are calling for a code of conduct that clearly outlines the behavioural and ethical standards expected from politicians with regard to women in Parliament.

The model will be formally submitted to the Independent Review into Commonwealth Parliamentary Workplaces, led by sex discrimination commissioner Kate Jenkins.

“Change doesn’t happen without people pushing for it,” Crabb told The New Daily.

“That is the story of women in politics more broadly, no matter what political party they’re from.”