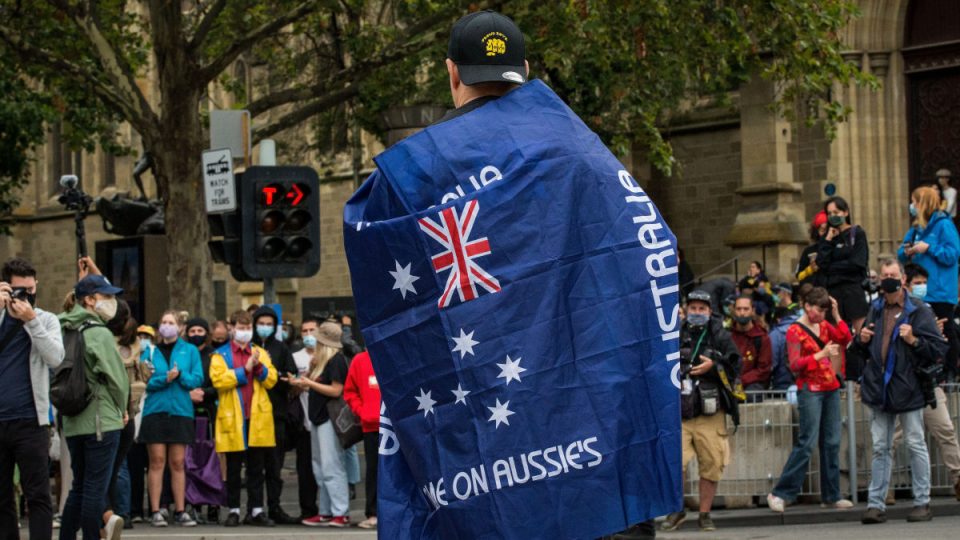 Right-wing extremist groups are drawing in new members from wellness and anti-vaxxer communities online, using the COVID pandemic and outrage over state border closures as a “recruiting tool” to swell their ranks.

That’s the assessment of Victoria Police, in a submission to a federal parliamentary inquiry into extremism, with fears the pandemic “intensified” far-right activity. National security agencies report children as young as 13 are joining right-wing extremist groups, which are getting more “sophisticated”.

“They see the pandemic as proof of the failure of globalisation, multiculturalism, and democracy, and confirmation that societal collapse and a ‘race war’ are inevitable,” said the Australian Security Intelligence Organisation in its submission.

The Parliamentary Joint Committee on Intelligence and Security (PJCIS) opened an inquiry into extremist movements and radicalism in Australia last year.

The Australian Security Intelligence Organisation said right-wing terror accounted for up to 40 per cent of its current workload, and an attack was possible in Australia.

The first PJCIS hearings are expected in April, but submissions to the inquiry have been shared online.

In a joint submission, the Departments of Home Affairs, Foreign Affairs and Trade, and Attorney-General warned hateful extremist content continues to blossom on mainstream platforms. The federal departments said as far-right sentiment grew in Australia, there had been “commensurate growth” in combating it, from intelligence and law enforcement.

“The COVID-19 pandemic and the resulting economic and social impacts have intensified the spread of extremist ideologies online, while the increasing use by extremists of secure communications poses a growing challenge to law enforcement.”

They warned that hateful content “remains readily available in the social media environment”, which is “further radicalising vulnerable individuals” in Australia.

The departments said encrypted messaging and more niche platforms were making it harder for authorities to track right-wing extremists. While large platforms like Facebook and Twitter have strong policies to restrict or block extreme content, platforms such as Telegram or MeWe are being used by far-right actors to organise and grow.

In its submission, Victoria Police warned of cross-pollination between right-wing and alternative communities.

“Victoria Police has identified an increase in anti-establishment views and the expression of negative sentiment toward politicians and law enforcement, particularly during the COVID-19 pandemic where reduced public freedoms fed into the narrative of those with an anti-government or anti-authority agenda.”

“Continued restrictions and border closures despite relatively low COVID-19 cases has continued to fuel the perception that restrictions are primarily a tool for authoritarian control, rather than for prevention of the spread of COVID-19,” they wrote.

“Extremists will continue to exploit the pandemic in order to draw greater attention to a cause, share propaganda, exacerbate communal tension and/or call for increased dedication and activity from their followers.”

Victoria Police also made reference to “left-wing extremists”, who they claimed were “mimicking overseas based movements (such as ANTIFA) to justify the use of violence to promote civil unrest and target perceived enemy groups.”

“The [right-wing] threat does not exist in a vacuum and is directly influenced by a symbiotic relationship with the threat of left wing extremism,” police wrote, speaking of “violent conflict at organised [right-wing extremist] events”.

But in a separate submission, ASIO all but dismissed any threat of left-wing extremism, saying such ideology “is not currently prominent in Australia”.

“The 2019 Christchurch attack continues to be drawn on for inspiration by right-wing extremists, both in Australia and internationally.”

That attack, where 51 worshippers were killed at mosques in New Zealand, was carried out by an Australian gunman who had ties to right-wing groups currently operating in Australia. That person is praised as a role model and influence by some extremist groups online.

The Australian Federal Police said of 19 major counter-terror operations relating to potential or imminent attacks since 2014, two were linked to right-wing extremists. Police also noted that, despite recent media coverage focusing on right-wing threats, authorities still had a major focus on other forms of terror.

“Since September 2014, there have been nine terrorist attacks in Australia. All were inspired by Islamic extremists. It is anticipated that any future attacks would involve weapons and tactics that are low-cost and relatively simple, including basic weapons,” the AFP said.

“The threats posed by Islamic extremists is enduring and diversifying and shows no sign of abating.”

Police also noted “rapid growth and globalisation” of right-wing extremists, saying they were aware of children aged 13 who had joined such groups, which posed new problems for enforcement.

“Individuals with an interest in [extreme right-wing] ideology may be more geographically dispersed or isolated, provide additional challenges for law enforcement and partner agencies to facilitate engagement and identify individuals at risk of radicalisation,” according to the AFP.

Despite the inquiry focusing on how law enforcement should respond to extremist groups, The New Daily understands that some of those groups are actually written submissions themselves to that inquiry. It is not known whether the Parliament will publish them online.