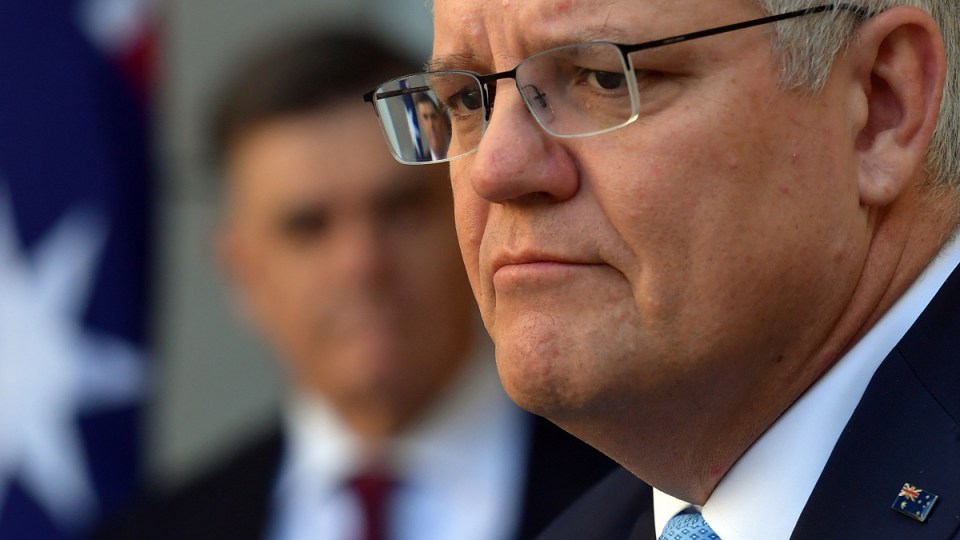 Prime Minister Scott Morrison is being urged to pressure the US into dropping the charges against Julian Assange. Photo: Getty

Calls are growing for the Morrison government to fight for the release of Julian Assange and bring him home after the Queensland-born whistleblower narrowly avoided extradition to the United States on Monday night.

His prospective release – and the legal justification for it – would answer key questions about human rights and free speech in Australia and around the world.

But even if Assange, 49, does return home, his battle for freedom won’t be over.

The US is determined to prosecute the whistleblower for helping to publish hundreds of thousands of secret files about the wars in Afghanistan and Iraq on his WikiLeaks website in 2010.

The files include a video of an American Apache attack helicopter killing innocent civilians.

According to Assange’s lawyers, who spoke to news.com.au, there is nothing stopping the US from promptly launching legal proceedings here.

They voiced their concerns after UK District Judge Vanessa Baraitser rejected the US’s request to extradite Assange on the grounds that he was depressed and at risk of committing suicide in a harsh American prison.

Assange’s lawyers are now in the process of applying for bail, while lawyers for the US government say they are going to appeal.

If the Americans win the appeal, Assange will again be facing charges that carry a maximum penalty of up to 175 years in jail.

Drop the charges and let him come home

Assange supporters and the federal Opposition want the federal government to ask the US to drop the charges against Assange, and to withdraw its request to extradite him from the UK.

Legal affairs spokesman Mark Dreyfus said Labor would keep pressure on the Morrison government to “do what it can to draw a line under this matter and encourage the US government to bring this matter to a close”.

“Given his ill health it is now time for this long drawn-out case against Julian Assange to be brought to an end,” Mr Dreyfus said.

The calls have been backed by the Greens and the Australian journalists’ union.

“We urge the US to consider this matter closed, to not seek an appeal and drop all charges against Mr Assange,” said Senator Janet Rice, the Greens’ foreign affairs spokesperson.

“The Australian government must finally help Mr Assange and work with him and his team to get him on a flight as soon as possible and ensure his safe return to Australia.”

Marcus Strom, president of the Media Entertainment and Arts Alliance, said: “Julian has suffered a 10-year ordeal for trying to bring information of public interest to the light of day”.

“But we are dismayed that the judge showed no concern for press freedom in any of her comments, and effectively accepted the US arguments that journalists can be prosecuted for exposing war crimes and other government secrets, and for protecting their sources,” Strom said.

However, Prime Minister Scott Morrison has refused to promise that he will try to convince US President Donald Trump to pardon Assange.

“The justice system is making its way, and we’re not a party to that,” Mr Morrison told 2GB radio on Monday.

“And like any Australian, they’re offered consular support and should, you know, the appeal fail, obviously he would be able to return to Australia like any other Australian.”

But in the eyes of Bruce Haigh, a former diplomat who worked at the Department of Foreign Affairs and Trade for 24 years, it’s “nowhere near enough”.

“This is an Australian citizen who has never been convicted of anything,” he told TND.

“Just like any Australian in that position, of course he should be assisted – irrespective of what moral judgments are made about him.”

Assange has long been a divisive figure.

To his supporters, the activist is a brave free speech advocate who has been unfairly punished for exposing corruption.

To his critics, he is an attention seeker accused of sexual assault who risked lives by publishing top-secret information, and should therefore face the US judicial system.

Returning Assange to Australia is only half the battle.
There are fears the US could simply reopen attempts to extradite Assange from Australia if he ever travelled to his home country.

“It is not enough for the Prime Minister to simply say he is free to come home if he wins the appeal,’’ Assange’s lawyer, Jennifer Robinson, told news.com.au.

She said the Morrison government should support her bail application, and appeal to the US to “close this case down altogether, given the judge’s ruling on his health and the grave freedom of speech implications”.

What the UK ruling means for press freedom

Although the ruling was a rare victory for Assange and vocal supporters, it did nothing to protect press freedom.

That’s because the main reason Judge Baraitser refused to extradite Assange to the US was because of his deteriorating mental health.

On nearly every other point, she backed the US government and rejected many of Assange’s key legal arguments:

The existing judgment was a hollow victory for free speech advocates, who fear the treatment of Assange will threaten other journalists and their sources who seek to hold governments to account.

“What I think is really disappointing is that the judge didn’t find on free speech grounds,” Ms Robinson told Channel Seven’s Sunrise program on Tuesday.

“So, it is a problematic precedent for journalists.”