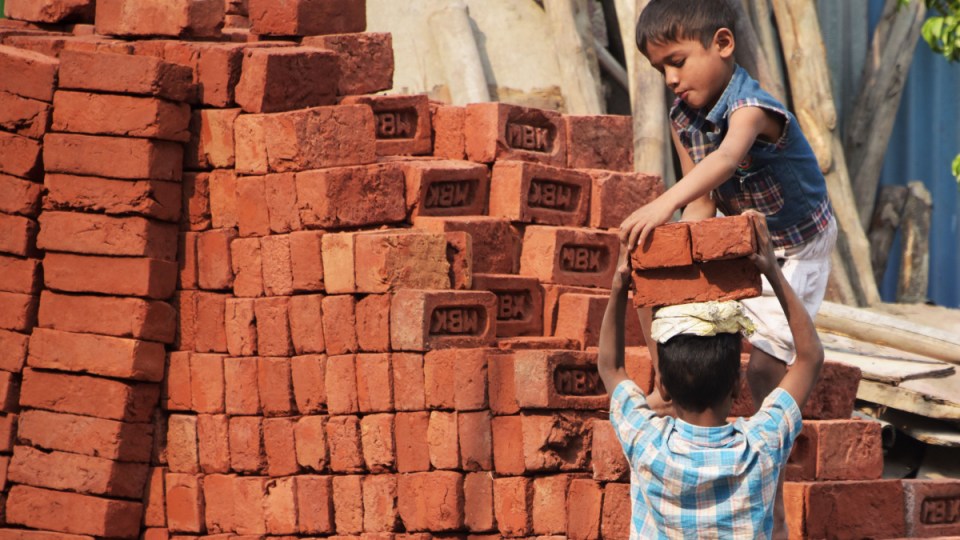 When the UK Modern Slavery Act was introduced in 2015 and its Australian counterpart followed three years later, these pieces of legislation were heralded as ground-breaking.

Both Acts require entities that meet the annual revenue threshold to report on the risks of modern slavery in their operations and supply chains, what actions they have taken to address those risks, and what the outcomes of those efforts have been.

Crucially, the Modern Slavery Act in each country lacks hard sanctions for non-compliance and solely relies on stakeholder scrutiny and market forces for enforcement.

The UK Home Office states that “failure to comply […] may damage the reputation of the business. It will be for consumers, investors and Non-Governmental Organisations to engage and/or apply pressure where they believe a business has not taken sufficient steps”.

In Australia, Home Affairs states that non-compliance can “damage your entity’s reputation, undermine your ability to do business with other entities and damage investor confidence.”

While Australian entities are yet to report, reporting in the UK has been underwhelming. In 2017, 43 per cent of companies on the London Stock Exchange did not produce a report, nor did 42 per cent of the top 100 companies that were awarded government contracts.

It appears that many businesses in the UK had no fear of a consumer backlash for being non-compliant with the Act, even if that consumer was the government itself.

The vague threat of reputational risk thus seems insufficient to prompt action. This is corroborated by the UN Special Rapporteur on Contemporary Forms of Slavery, who commented that  “soft law’ frameworks have […] had a limited effect in ensuring corporate and state accountability”.

Progressive developments in other jurisdictions

While the UK and Australian governments are busy patting themselves on the back, other jurisdictions – in Australia and abroad – are pursuing more progressive legislative change.

The NSW Modern Slavery Act was passed in 2018. Its main point of differentiation with its Federal counterpart is that the NSW Act can apply a penalty of up to $1.1 million for non-compliance.

Unfortunately, the NSW Government will review the NSW Act  and “introduce necessary amendments to the Act with a view to commencing components of the NSW Act that complement the Commonwealth Act and which are not inconsistent with it”.

This is a roundabout way of saying that the amended NSW Act will not include penalties.

Overseas jurisdictions where more ambitious and forceful legislation has been introduced or is being considered are France, the Netherlands, Switzerland, and the European Union.

Human rights due diligence and liability

France passed its Duty of Vigilance law in 2017. As a world-first, this legislation can be used to hold a parent company and its subsidiaries, or a multinational and its subcontractors, liable in the event of human rights or environmental violations.

Any party is able to ask a judge to issue an order for a company to comply with the law. If a company’s non-compliance has caused damage to a third party, that party may then request compensation under common civil liability law.

A Dutch law introduced in 2018 introduces a duty of care to prevent the supply of goods or services which have been produced using child labour. It is the first of its kind to introduce criminal sanctions for a company’s failure to exercise human rights due diligence.

A nation-wide referendum will take place in Switzerland in November on the Responsible Business Initiative. If the initiative is supported by a majority, mandatory human rights and environmental due diligence will be introduced for Swiss companies. 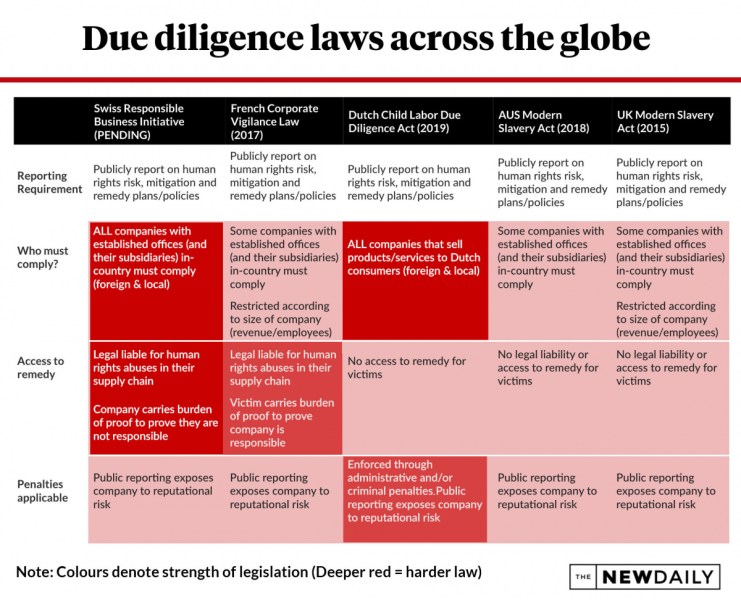 Under the proposed Swiss law, a company would be liable for damages abroad for violations of international human rights or environmental standards caused by companies under its control, unless it can prove it took all due care to avoid the violation.

What is ground-breaking about the proposed Swiss law is that it partly reverses the burden of proof: it requires the company to establish that it took care to prevent violations, or to demonstrate that the damage would have occurred even if adequate care had been taken.

The European Union intends to introduce new corporate environmental and human rights due diligence in 2021. There are few details about the final form that the legislation will take, however, it is clear the new regime will include penalties for non-compliance.

These laws drastically raise the bar for Australian companies operating or looking to operate in the European market. A generic statement about modern slavery or human rights, which would imply compliance with the Australian Modern Slavery Act, would be insufficient.

Australian companies with indirect exposure to the European market (for example through the supply of goods to companies to which due diligence legislation does apply) can expect a non-negotiable demand from their European business partners to demonstrate human rights and/or environmental due diligence as part of contracting arrangements.

The legislative trend in Europe show that the days of soft law and voluntary initiatives to hold companies to account for human rights abuses are coming to an end.

Australia must take care not to fall behind

Australia’s industries cannot compete with countries or companies that are able to keep their prices and production costs low through showing a disregard for human rights.

The competitiveness of Australian businesses is best served by taking the high road and offering products and services that come with leadership on human rights.

Beyond the moral argument and the contribution to global efforts in combating human rights abuses, it is in the interest of Australia to introduce policies that bring Australian businesses in line with global best practices.

This also holds true for other policy areas such as climate change.

The reaction of Scott Morrison to Joe Biden’s proposed target of net-zero emissions by 2050 is alarming. Morrison stated that “Australia will always set its policies based on Australia’s national interests and the contributions we’re making in these areas”.

Australia’s interests are in taking the lead on human rights and climate change, not in falling behind.