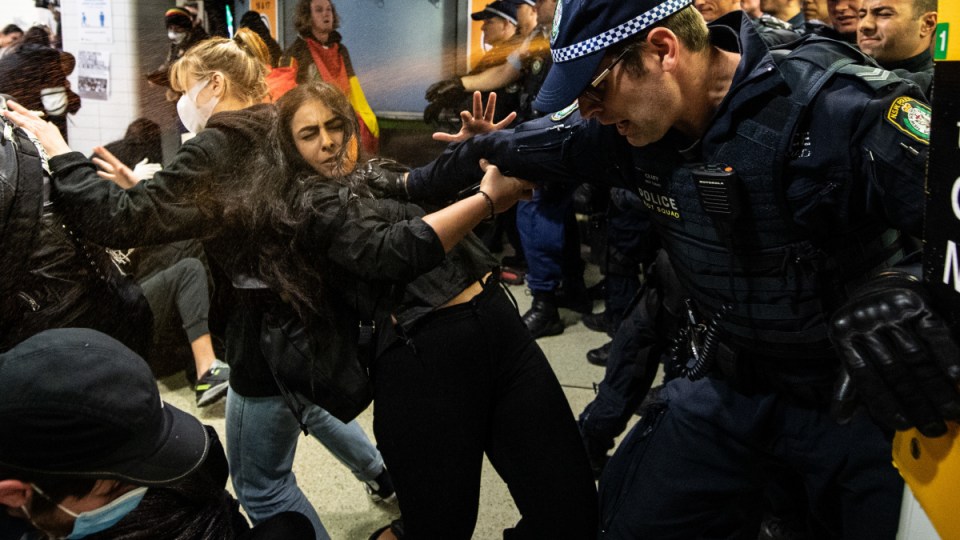 NSW Police is standing by its decision to blast anti-racism protesters with pepper spray at Sydney’s Central Railway Station on Saturday, claiming it was necessary to quell “further violence”.

Outrage over the move erupted on social media, with one police accountability specialist arguing it was an inappropriate use of force after what was a largely peaceful protest against Indigenous deaths in custody.

But Acting NSW Police Commissioner Mal Lanyon has defended the use of pepper spray by officers, saying some protesters were “behaving aggressively” toward police.

“I support the use of the capsicum spray and the way that the police responded in order to ensure that there was not further violence,” Acting Commissioner Lanyon told reporters on Sunday.

He said that before the clash at the train station, one police officer was struck in the face with a can of drink, while another was struck with a bottle.

Half a brick was also thrown at a police vehicle, he said.

A 21-year-old man has been charged with resisting arrest and offensive behaviour.

But Jeremy King, principal at Robinson Gill Lawyers, said the use of pepper spray by police – especially in a contained space like a train station – was “really disappointing”.

“I don’t think police should ever be using aggression to calm protesters down,” Mr King told The New Daily.

“There are a number of different strategies they have for de-escalating a situation.”

He said pepper spray should only be used “as a last resort, if they’re fearing for their safety or the safety of others”.

‘Maced in the face’

Jane Margaret, a protester on crutches, said she was “maced in the face at point blank” range after trying to intervene between protesters and police at Central Station.

In a video posted to Instagram from her hospital bed, Ms Margaret said one of the officers put his hands around her throat and tried to push her.

“He then stepped forward with a mace can, and at point blank – 10 centimetres from my face – just sprayed me with mace … and I dropped,” she said.

I do hope that there will be further investigation of this incident, in which a lady with a disability on crutches has been pepper sprayed by the NSW Police at Central Station pic.twitter.com/hUn4k6Loe9 #auspol #auslaw #blacklivesmatter

The incident occurred as tens of thousands of Australians gathered in Brisbane, Adelaide, Melbourne and Sydney CBDs to protest against racism and Indigenous deaths in custody.

The peaceful rallies formed part of the global Black Lives Matter movement sparked by the death of unarmed African-American George Floyd in Minneapolis.

At least 20,000 people joined the march in central Sydney after the Court of Appeal declared it an authorised public assembly less than 15 minutes before it was due to begin.

A Victoria Police spokesperson told The New Daily they were “generally pleased with the behaviour” of Melbourne protesters.

However, the organisers behind the Melbourne event, Warriors of the Aboriginal Resistance, are expected to each be fined $1652 for breaching the directions of the chief health officers.

“We are reviewing footage, gathering evidence and expect to take enforcement action against several organisers in due course,” the spokesman said.