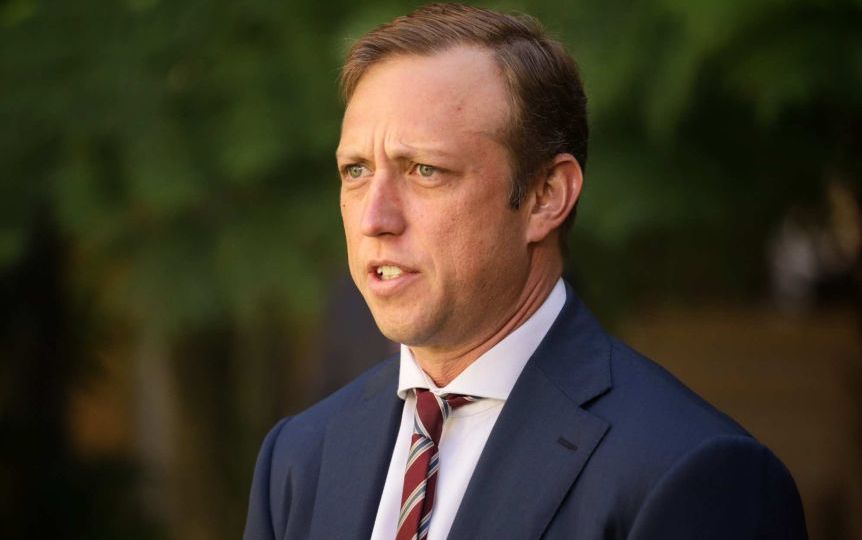 Health minister Steven Miles is upset about a Victorian man bringing another case of the coronavirus to Queensland. Photo: ABC

The case of an infected Victorian man who flew to Queensland – sparking a mass public health alert – has solidified the state’s stance against reopening borders.

The fruit picker’s positive COVID-19 test was Queensland’s only case on Saturday while Victoria celebrated its first day of no new infections since the pandemic began.

Queensland health minister Steven Miles said the case of the interstate worker, who took two flights and a bus and caught up with some 15 family members, proved why borders should stay closed.

“If you just imagine the risks that that would put to Queenslanders’ health and our economy, you would understand why we would keep those restrictions in place.”

The 24-year-old Melbourne man caught a Skybus from Melbourne’s Southern Cross station to the airport, where he boarded Virgin flight VA313 Melbourne to Brisbane on June 1.

He spent the night in the Queensland capital, catching up with some 15 family members on the south side before boarding VA2905 for the final leg of his journey to regional Bundaberg on June 2.

Mr Miles said the man had been in contact with a known COVID-19 patient before flying interstate and had his diagnosis confirmed on Saturday.

“Clearly there’s a lot of work for our contact tracers to do,” Mr Miles said.

“There’s two flights, the contacts in Brisbane, who will have to be tested and quarantined, those who travelled on the transport from Bundaberg airport and those in the shared accommodation and those working with him on the farm.”

Victorian health officials tied the infection to the Rydges on Swanston outbreak, but noted he was not rated a close contact so was not under a quarantine order when he left Victoria.

Queensland’s chief health officer Jeannette Young said the man, who was in Bundaberg to pick strawberries, is known to have shared accommodation with four others, all of whom had been tested and found to be negative.

“I am waiting on a whole range of other tests to come back later today for other contacts,” she said.

“But it is really important that people who live in Brisbane or in Bundaberg don’t wait for a phone call from a contact tracer.”

Police will fine organisers of Melbourne’s Black Lives Matter rally as health officials remain on guard against a spike in coronavirus cases.

Tens of thousands of protesters defied coronavirus gathering restrictions on Saturday to support the Aboriginal community and stand in solidarity with Americans over the death of George Floyd.

Twenty thousand people marched in Sydney and crowds rallied in Melbourne, Brisbane, Adelaide and some regional cities and towns on Saturday despite public health warnings.

Although many demonstrators wore face masks and used hand sanitiser, the crowding made it impossible for most to maintain social distance.

Melbourne’s rally organisers are to be fined $1652 each for breaching the directions of the chief health officer after an earlier warning from police.

“We remain concerned that such a large gathering has occurred without regard for the need to maintain social distance and will now consider what action should be taken in relation to the organisation and conduct of this unlawful gathering,” Assistant Commissioner Luke Cornelius said.

Wurundjeri woman Mandy Nicholson, who spoke at the rally, said it was ridiculous to fine people for fighting injustice and she would contest a fine if she received one.

“We also had police marching with us and talking with us.

“It was very peaceful and a life-changing event for not only black people but everyone.”

Britain’s Prince William has revealed he has been anonymously helping out on a crisis helpline during the coronavirus lockdown.

The Duke of Cambridge’s work with Shout 85258 – an around-the-clock text messaging helpline developed by the Royal Foundation – was made public to mark Volunteers Week.

Last month, he told fellow volunteers in a video call that was shared on social media late on Friday: “I’m going to share a little secret with you guys, but I’m actually on the platform volunteering.”

William, who is second in line to the throne, is one of more than 2000 volunteers who have been formally trained to help those in need.

More than 300,000 text conversations have taken place between volunteers and people needing mental health support, with around 65 per cent of those texting aged under 25.

William’s wife, the Duchess of Cambridge, has also been helping others by taking part in “check in and chat” calls with people self-isolating or vulnerable during the pandemic.