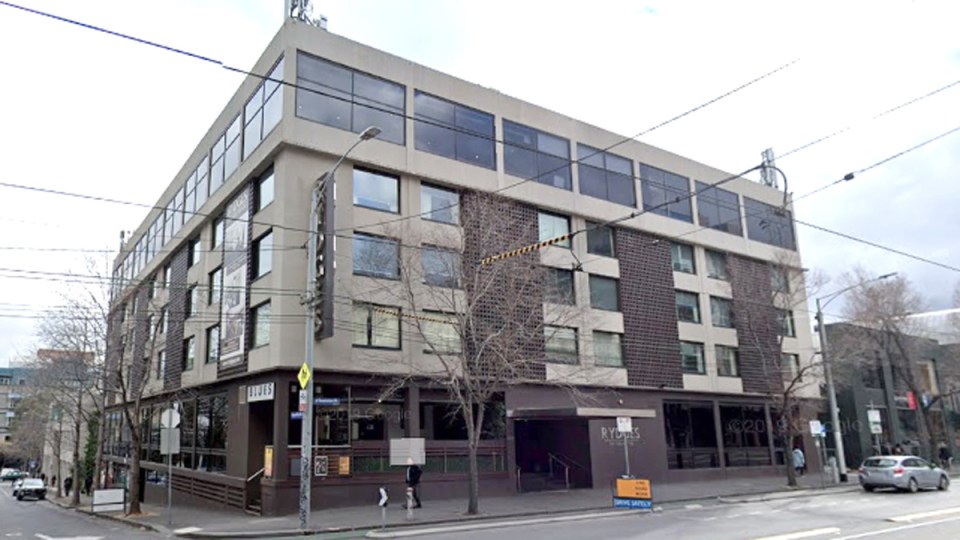 Ninety per cent of Victoria's current COVID-19 cases have been traced back to an outbreak at the Rydges on Swanston hotel. Photo: Google Maps

A second security guard at a Melbourne hotel housing quarantined travellers has been diagnosed with the coronavirus.

And five of Victoria’s 10 new cases reported on Thursday were in family members of an existing confirmed patient.

Victorian chief health officer Brett Sutton confirmed the infection in the worker at Rydges on Swanston, a day after the first virus case linked to the hotel.

“They are security staff who had come down with illness,” Professor Sutton said.

“Normally we would have a security member at the front entrance, as well as a security guard on each floor to monitor all of those who were in quarantine there.

“There wasn’t much overlap in their working schedules but there is the possibility that they have overlapped at some point.”

Professor Sutton said the security staff weren’t involved in direct care of quarantined travellers, but would sometimes accompany them while wearing safety gear.

The hotel is shut to the public.

“Rydges has 13 people who have current active disease, and there are three others who are in quarantine there that are their close contacts,” Professor Sutton said.

Close contacts of the workers have been contacted and all staff are being offered testing.

Professor Sutton also said more people might be diagnosed from the “big household” involved in the emerging cluster of cases. There are already six cases in that outbreak.

The remaining cases reported on Thursday were in returned travellers in hotel quarantine.

Rush to test in central Queensland

Three testing clinics opened in the coal mining town of Blackwater opened on Thursday, and sewage from its 5000 residents is being screened to determine COVID-19 infection levels.

There were lengthy queues outside the town’s testing centres on Thursday as residents sought testing after the sudden death of 30-year-old mining worker Nathan Turner.

Mr Turner, a Blackwater mining worker, is the youngest person in Australia to die of the virus.

His partner, Simone Devon, who found him unresponsive on the floor of their house on Tuesday afternoon, is in isolation in Rockhampton hospital after also suffering COVID-19 symptoms.

Her first test for the virus was negative. Results from a second test were expected on Thursday.

Mr Turner had not left Blackwater in months, and the source of his deadly infection has health authorities worried. He had respiratory symptoms in early May, but did not get tested because of an underlying health condition.

Contact tracers have been sent to Blackwater to find everyone who had direct contact with Mr Turner.

So far they’ve tracked down 20 people, with 18 testing negative. The other two were to be tested on Thursday.

By the end of the day more than 120 locals will have been tested.

“There is a significant fly-in, fly-out workforce, so all of that’s being investigated as well,” Dr Young said.

Investigators are also considering if Mr Turner’s infection could be linked to a Rockhampton nurse, who visited the town to watch the sun set when she was infectious with the coronavirus.

Health Minister Stephen Miles has been advised Mr Turner developed symptoms before the nurse took her 400-kilometre round trip.

She is the same nurse who sparked the lockdown of a Rockhampton aged-care centre early in May.

“Obviously, it is a bit curious,” Mr Miles said of the trip, which appears to have breached Queensland health directives about travel at the time.

This week Mr Morrison said national expert medical advice never recommended shutting internal borders and it was not good for the economy.

“The last time I looked, the Prime Minister wasn’t the director of public health in Tasmania nor was he the premier of Tasmania,” Mr Gutwein said on Thursday.

“We’ll make decisions that are in the best interests of Tasmania.”

Mr Gutwein held firm on saying he hopes to announce in July when the island’s border will reopen.

South Australian health authorities have backed away on claims Victoria did not tell them about a British woman who arrived in Adelaide from Melbourne and later tested positive for coronavirus.

“What this issue has highlighted is the need to strengthen the processes involving travellers arriving from overseas and travelling between states during their quarantine period,” she said.

Professor Spurrier said she would work with her federal and state counterparts to improve processes.

The woman, aged in her 50s, travelled to Adelaide on Sunday after being granted an exemption to visit a dying relative.

She had spent about a week in quarantine in Victoria after arriving from Britain and had tested negative while in isolation.

Tested again in Adelaide, she returned the positive result, becoming South Australia’s 440th case of COVID-19 and the first for almost three weeks.