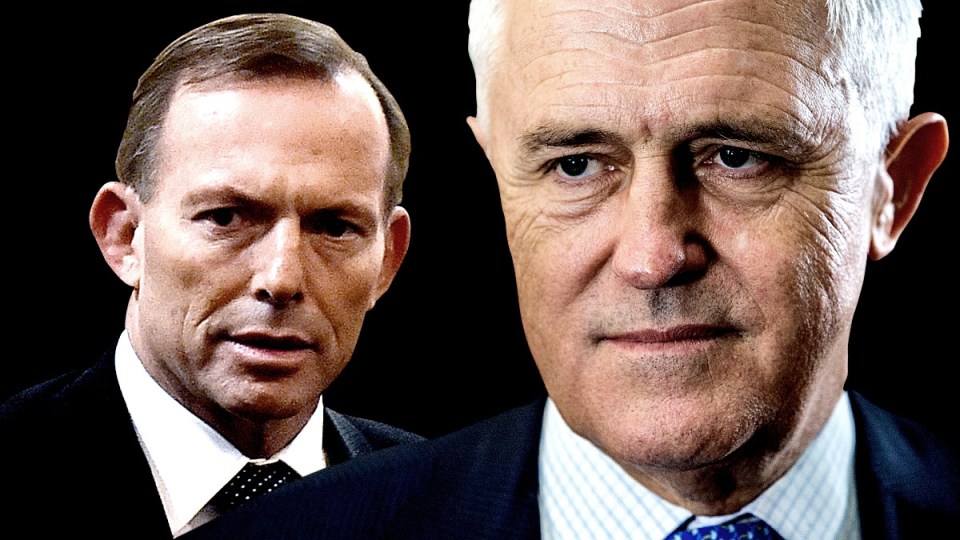 During the final months of Tony Abbott’s disintegrating time as the nation’s leader, constant critic and ultimate usurper Malcolm Turnbull concluded he was not just electorally unpopular but “crazy”.

In Turnbull’s blockbuster memoir A Bigger Picture, the former prime minister chronicles Abbott’s use of national security as a bulwark for his leadership, particularly a series of news conferences with police and military personnel standing in front of a growing phalanx of Australian flags.

The diagnosis that Abbott was crazy came from two examples of national security overreach outlined by Turnbull: a plan to send armed Australian military personnel to Ukraine following the downing by Russians of the Malaysian passenger jet and a plan to send 3500 ground troops to Iraq to work with local forces in the battle against the Islamic State.

My book isn’t out until next Monday but here are the contents pages! The virtual book tour will be interesting – trying to work out how to do a live event from my kayak! #abiggerpicture pic.twitter.com/9lyRY7dM8e

“(The Iraq plan) was presumably designed to show that Abbott had a muscular foreign policy in contrast to what he regarded as the flabbiness of (US President Barack) Obama’s,” writes Turnbull.

“(Abbott’s chief of staff Peta) Credlin, who more often than not spoke for Abbott, had described Obama as the lamest of lame ducks to a group of journalists the previous year.

“Fortunately, senior Defence people managed to head this wild idea off, just as they’d headed off Abbott’s plan to send armed troops to Ukraine to guard the MH17 crash site.

“But it reinforced the suspicion that our problem with Abbott wasn’t simply electoral unpopularity – he was crazy.

“And was that surprising? He had, after all, been nicknamed the ‘Mad Monk’ at university.”

This is the most damning condemnation Turnbull makes of his nemesis in this political page-turner, itself full of salacious gossip, private conversations, devastating character assessments and a pervasive sense of infallibility on the part of the author.

“Arthur, like me, believes Abbott is a dangerous prime minister, a threat to the nation and its security,” writes Turnbull of the final months of Abbott’s time as PM.

“The question is how and when can we move him on? Not yet, but we need a change. We talked about Morrison and his relentless ambition, Arthur thinks Morrison has been anointed by Abbott as his successor and is likely to try to protect Abbott from any threats for the time being.”

Coverage of the Turnbull book centres on personality politics.
Hopefully reviewers will try to answer a bigger question: The rise of the Liberal Leftie.
How did Libs make a guy who believes in Guardian Australia, gender fluidity, closing down coal and 100% renewables their PM??

Throughout the book, Turnbull doesn’t hold back in denouncing Abbott’s policy and political failings as well as a weakness in his inability to escape the sway of Credlin or his kowtowing to conservative media, especially News Corporation, the Sky News after dark crowd and Sydney radio shock jocks.

He flails Abbott and his governing style with a punchy set of sentences: “More than just about anyone I’ve encountered, Abbott is primarily driven by hatreds, fears, prejudice – anything negative. It’s as though he’s defined himself by what he’s against, without much thought for what he’s for.

“Right from the outset, the government lacked a coherent economic narrative: apart from repealing the carbon tax and the mining tax, what else did we have to say? Budget repair? But was it all to be about cutting expenditure? What was to be done to encourage investment and economic growth?

“That’s one reason Turnbull takes a close look at the partnership of Abbott as PM with his chief of staff, Peta Credlin, in which he sees Credlin as the boss. “In all my life I’ve never known a leader more dominated by another than Abbott was by Credlin,” Turnbull writes.”

“Neither Abbott nor Credlin were prepared to work within a conventional cabinet system where matters were discussed candidly in private, decisions were taken collectively and then announced.

“Instead, everything was geared to whether it would make a headline. Decisions were impetuous and more often than not briefed out to the media, typically The Daily Telegraph or The Australian, before being discussed with cabinet colleagues.”

Turnbull and Abbott do share one overarching trait – apart from their ambition and relative lack of self-awareness – and that is a consuming paranoia about each other.

When Turnbull’s prime ministership came under threat because of the national energy guarantee (or NEG) policy, the then-prime minister saw the hand of Abbott in the efforts leading to Peter Dutton’s quixotic tilt at the leadership.

“Throughout all my time as prime minister, Abbott had been working hard to bring down my government with consistent support from a number of so-called conservative voices in the media – Alan Jones and Ray Hadley on 2GB, as well as Peta Credlin, Andrew Bolt, Piers Akerman and many others at News Corporation, writes Turnbull,” Turnbull writes.

“While the News Corporation newspapers were always supportive of Abbott, the intensity of their efforts to damage my government varied from time to time.

“The exception was The Australian, which was as consistently destructive as it could afford to be without losing all of its diminishing credibility as a serious newspaper. Similarly, Sky News ‘after dark’ was relentless.”

PM Scott Morrison brushes off a question about Malcolm Turnbull's new book – "I'm not interested in any distractions. I'm focused on the health and safety of Australians" #auspol

Turnbull said he felt helpless in the face of these assaults, “after all, they wanted my head” and Abbott’s plan “was to ensure we lost in 2019, then he would return as opposition leader after the loss and lead the Coalition back to victory in 2022, an insane agenda which, as Rupert Murdoch later admitted to me, had strong support within News Corp”.

Turnbull details a fascinating set of exchanges with Murdoch and his son, Lachlan, including one alleged response from the News Corp chairman when confronted with complaints about The Australian and night time Sky News hosts.

“Rupert would often say ‘nobody watches Sky News’ or ‘The Australian doesn’t have a big readership’,” writes Turnbull.

Dennis Atkins is a freelance journalist, who has worked for a number of prominent titles including The Courier Mail and the Sun-News Pictorial. He worked in the Canberra press gallery in the 1980s and early 2000s.