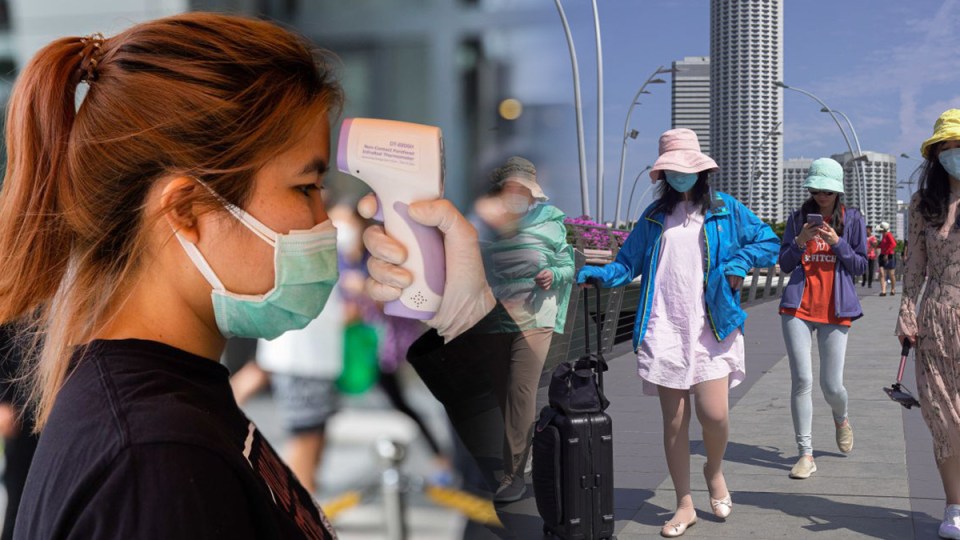 Futuristic hand-held scanners are being used all over Singapore to regularly check people’s temperatures as part of a nationwide push to track and limit the spread of COVID-19.

The technology could be a sign of measures to come after the World Health Organisation urged countries to ramp up coronavirus testing.

“We have not seen an urgent enough escalation in testing, isolation and contact tracing,” WHO director-general Tedros Adhanom Ghebreyesus said this week.

“You cannot fight a fire blindfolded and we cannot stop this pandemic if we don’t know who is infected.

“We have a simple message for countries: Test, test, test.”

The WHO’s message has been heard in Australia, where almost 100,000 coronavirus testing kits are being delivered this week to boost dwindling stock levels.

But we have a long way to go to catch up to Singapore.

In the Asian city-state, anyone entering a public building, including offices or shopping centres, must first have their temperatures scanned at the doors.

Melbourne lawyer Henry Carlson, who is living in Singapore, said the devices looked like a remote control.

“They point it at your forehead, like a laser, then they click it and it shows your temperature,” Mr Carlson told The New Daily.

If a person’s temperature is normal, they are given a sticker to wear that indicates they are healthy, he said.

If not, they must sit on an ‘isolation chair’ while they cool down.

If they fail again, they are refused entry and must go home.

And it’s not just happening in public buildings – waiters have been spotted with scan guns, too.

“I went for a burger and beers on Friday with some mates when one of the waiters came around with a temperature scanner,” Mr Carlson said.

“They scanned my forehead just as I was about to order.”

The technology is one of the impressive ways Singapore has been limiting and tracking the spread of COVID-19.

Despite being one of the earliest countries hit by what was then dubbed ‘Wuhan flu’, Singapore has not had one fatality and its number of confirmed cases has stayed relatively low at 243.

That’s partly because the tech-savvy government, experienced from handling the SARS epidemic of 2002 and 2003, was quick to test and track people.

Within days of detecting a new case, health authorities were able to trace a chain of transmission from one person to another using a database with the public’s contact information.

Hospital staff were able to track down and interview patients about their whereabouts and, in some instances, CCTV footage and travel records were used to fill in the blanks.

Singapore’s disease monitoring and tracking procedures has allowed the city-state to detect three times the number of COVID-19 cases as other countries, a recent study by Harvard University researchers estimated.

And its success is being felt in the streets.

“You feel like it’s a lot more under control here than anywhere else,” Mr Carlson said.

“People are very disciplined and the government has been really good at communicating everything to us.”

In Singapore, members of the public can sign up to a government-run WhatsApp account to receive daily updates about COVID-19.

People can also access a live interactive map that shows the whereabouts of confirmed cases.

Crackdown on people in self-isolation

Smart technology is also being used to monitor people who have been ordered to stay home in self-isolation for 14 days.

At-risk or infected people who are meant to be staying at home receive a text message or phone call at various times during the day asking for a photo or GPS update of their location.

What is the Australian government doing to track and test cases?

In Australia, there is no formal federal procedure for tracking and monitoring confirmed cases of COVID-19.

That job is left up to the states and territories.

Over the past few weeks, hospitals and medical centres around the nation have been opening drive-through COVID-19 testing facilities to help fast-track testing of those who think they are infected.

But even though we are ramping up our testing, we are a long way behind Singapore’s capabilities.

And we need to catch up quickly.

Right now in Victoria, there is a significant shortage of swabs and reagent kits.

As a result, medical practitioners have been told to limit testing only to patients who report coronavirus symptoms and have either been travelling overseas in the past 14 days or have come into contact with a known case.

The federal government is trying to fix this problem by importing 97,000 testing kits this week.

Health Minister Greg Hunt said the government was also working on expanding the use of alternative tests being developed in Australian laboratories so we wouldn’t have to rely on international manufacturers.

“The aim is to have more tests and more types so we can avoid any disruption in the large-scale testing regime we have in place in Australia,” Mr Hunt said.

The Doherty Institute in Melbourne has created an in-house testing method, which the government hopes to roll out to other labs.