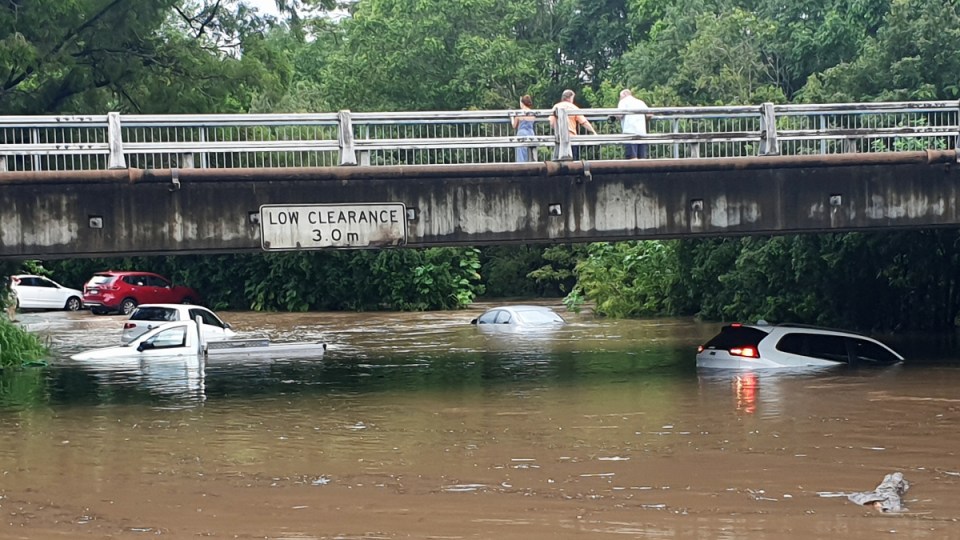 Emergency services are bracing for more wild weather down the east coast of Australia as ex-tropical Cyclone Uesi barrels across the Tasman, wreaking havoc from Bundaberg to the NSW border.

In the 24 hours to 9am on Thursday, more than 230mm of rain fell as Queensland’s Bureau of Meteorology warned of more intense rainfall to come.

Gold Coast police are searching for Yang Chen, 26, who went missing after walking near Gorge Falls in the Tallebudgera Valley in the hinterland while a 75-year-old man missing since Sunday after kayaking on the swollen Mary River in the Sunshine Coast hinterland, has reportedly been found dead.

The ABC reported authorities said it was too early to say whether the man drowned in floodwater or suffered a medical episode after setting out from Conondale on Sunday.

Police say the man was an experienced kayaker and was known to head out in the river when it was in flood.

Brisbane received up to 100mm in the 24 hours to 9am, the Gold Coast up to 200mm and at 1.30pm on Thursday a severe storm warning was issued for the Central Highlands and Coalfields, Maranoa and Warrego and Southeast Coast forecast districts.

The Queensland Fire and Emergency Service has been kept busy with 19 swift water rescues across the state, evacuating a Mt Coolum nursing home (215mm of rain) and attending to a Gold Coast mother who rescued her primary-school aged boy who was swept into a rising river from the footpath late on Wednesday afternoon.

Mount Tamborine has been hammered by heavy wind and rain, forcing shops to close and residents to seek shelter indoors.

More flash flooding has been forecast for Thursday afternoon prompting warnings for coastal communities from Bundaberg to the NSW border to be on flood watch.

Senior Meteorologist, Grace Legge provides an update on two current systems that will impact coastal southeast Qld and NSW. And on ex-tropical #CycloneUesi which is likely to impact #LordHoweIsland. pic.twitter.com/6ng1RdF8nK

Most of the beaches along southern Queensland will remain closed amid fears of worsening dangerous surf over the next 24 hours.

Gold Coast and Sunshine Coast beaches and theme parks have been closed while state schools at Currumbin Valley, Tallebudgera and Warra have been shut, as well as Noosa Pengari Steiner School.

Dangerous surf conditions are expected to worsen later today and continue into Friday. Most beaches across south-east #Queensland are closed. Follow lifeguard directions and only swim at open beaches between the flags. For weather updates, follow @BOM_Qld #CycloneUesi pic.twitter.com/DEDqkEU7Pi

Meanwhile, hundreds of residents on Queensland’s Sunshine Coast are dealing with power outages and submerged roads. About 1500 customers remain without power as of 1pm on Thursday, Energex reported.

Major flood warnings are in place for the Condamine River, downstream of Warwick in southern Queensland.

Warnings are also in place for Myall Creek, near Dalby, and Charleys Creek in Chinchilla.

Large swells from Tropical Cyclone Uesi are expected to pummel beaches south of Fraser Island, with the Gold Coast expecting the heaviest surf on Thursday.

The Department of Transport and Main Roads says roads are flooded at various locations, including Doonan, Mount Coolum, Tewantin and Nambour.

Residents in Jandowae on the Western Downs watched the water rise quickly in the town overnight.

In the state’s far north, residents are bracing for heatwave conditions into the mid-40s, with February temperature records expected to tumble.

As the total rainfall of 700mm drenched parts of NSW over the past week, the heritage-listed Nepean Dam in Sydney’s south reached 100 per cent capacity and has spilled over into the Nepean River.

Warragamba Dam now at more than 73 per cent capacity, surging from 43 per cent a week ago.

The ex-tropical cyclone is tracking towards Lord Howe Island, 600 kilometres east of Port Macquarie, with destructive winds and intense rainfall forecast to hit the island from Thursday.

Mr Funnell said the state’s battered coast will likely be further eroded over the next few days.

“The sea is going to be a very dangerous place to be this weekend,” he said in Sydney.

Rain is forecast for much of the coast on Thursday and Friday with Sydney, the Northern Tablelands, Mid-North Coast, Hunter and South Coast to get a drenching.

A severe thunderstorm warning has been issued for the northeast with Lismore, Tenterfield, Byron Bay, Ballina and Casino facing possible flash flooding.

Flood warnings are in place for several rivers, including the Tweed River at Tumbulgum and the Orara River at Glenreagh, with the bureau saying many waterways are already saturated after last week’s record rainfall.

The NSW State Emergency Service has also warned of minor flooding in the upper Nepean River at Menangle in Sydney’s southwest.

Marine Rescue NSW operations director Andrew Cribb warned most coastal areas will be extremely dangerous on Friday and the weekend.

He urged rock fishers to avoid coastal areas completely and advised boaters as well as surfers to rethink their plans.

About 21,000 people across Sydney and the Central Coast are still without power after last weekend’s record rainfalls.

Many are bracing for more days without power as utility company Ausgrid works to get electricity back to all its customers by the end of the weekend.