Qantas will plough ahead with its scheduled flights to and from China despite airlines across the globe grounding planes as the deadly coronavirus continues to sweep the country.

The airline has been accused of “putting profits first” by not following the lead of airlines such as British Airways, Cathay Pacific, American Airlines and more.

On Thursday, a handful of carriers made the decision to cancel or cut back flights to Shanghai and Beijing.

Qantas has instead offered passengers with flights to mainland China between now and March 31 the option to rebook or refund their tickets.

@qatarairways #coronavirusaustralia #coronarvirus Qantas needs to follow other world airlines and stop flighst from China. Australians are at a risk by then putting profit 1st

@Qantas When will you be suspending all flight from China to Australia? #coronarvirus

A Qantas spokeswoman told The New Daily the airline was “monitoring the situation” in China closely, and would make decisions on suspending or cutting back flights based on developing information. 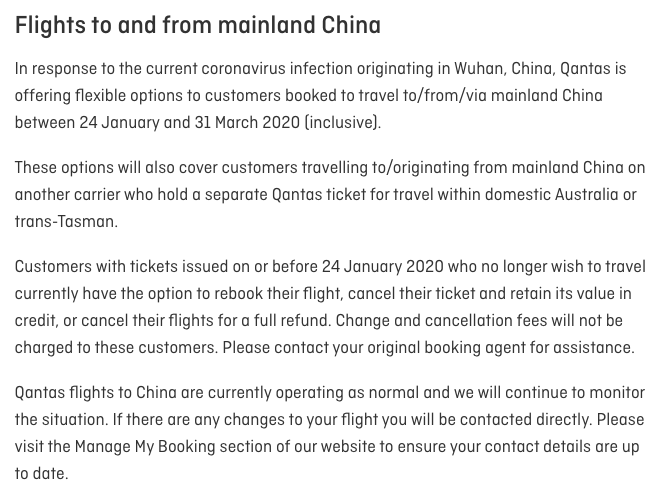 Health authorities on Thursday were desperately trying to contact almost 200 people, after it was revealed a 44-year-old Chinese man from Wuhan, where the outbreak began, was diagnosed with the disease after catching a Tiger Airways flight.

The man was part of a tour group that caught a flight from Melbourne to the Gold Coast on January 27.

Queensland’s chief health officer Jeannette Young said on Thursday that four others in the man’s group were also ill.

Passengers on Tiger Airways flight TT566 arriving on the Gold Coast in the evening of 27 January 2020 are urged to contact 13 HEALTH for advice.

A passenger became ill on this fight and has now been confirmed to have the novel Coronavirus. #qldpol #auspol

For a flight carrying 200 people, with one person infected, it could result in between two and three more people contracting the virus, Professor of Global Biosecurity at UNSW Rain MacIntyre predicts.

“However, these are only estimates. You can also get super-spreaders occasionally who can infect more people,” Professor MacIntyre told The New Daily.

“Research from outbreaks of other infections on planes shows the risk is proportionate to the distance you are seated to the patient.”

Professor MacIntyre said planes and travel can be hotbeds for viruses and infections for a multitude of reasons.

On planes, outbreaks of tuberculosis and other infections have been reported on planes; it’s a small, closed atmosphere with limited hour air fluctuations.

However, Australians do not need to fear plane travel overly, in the midst of the breakout.

Professor MacIntyre said while travel was a major vector for the spread of infections like measles and influenza, the risk for travellers contracting coronavirus was still low unless they were travelling directly to China.

Still, she said Australian authorities must be quick to think on their feet to stop the spread of the disease.

“We do not want an epidemic taking off here,” Professor MacIntyre told The New Daily.

“It would overwhelm our health system, and this is a much more serious infection than flu.”

At the time of writing, the virus had claimed the lives of 170 people in China, with a further 7700-plus cases confirmed.

The World Health Organisation is on the brink of declaring the outbreak a global emergency.

Australia’s Smart Traveller website has advised Australians to reconsider travel to China – not just the epicentre Hubei province – and has asked anyone who has returned from there recently to isolate themselves for 14 days to avoid spreading the virus.