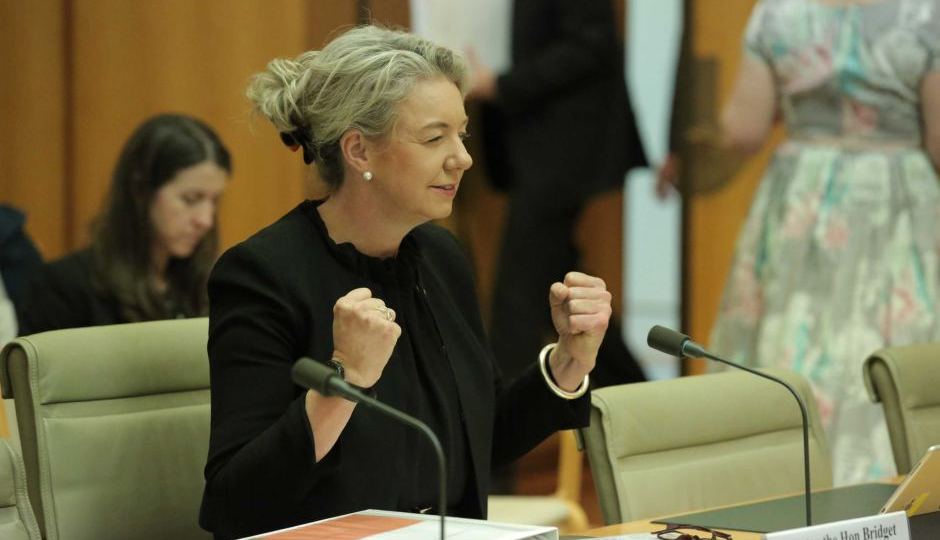 Bridget McKenzie was sport minister at the time of the program. Photo: ABC

Prime Minister Scott Morrison says he stands by Bridget McKenzie, the minister at the centre of the sports grants scandal, amid mounting pressure and calls for the Nationals MP to resign.

Mr Morrison said grants to sporting clubs had gone to “all seats…across the board,” not just to those where the government was trying to win votes.

It comes after an independent review found $100 million worth of funds had been largely directed to marginal and in-doubt Coalition seats ahead of the federal election.

“The rules show that at the end of the day the decision-maker would be the minister – and the rules were followed,” Mr Morrison told Sunrise on Monday morning.

Asked whether Senator McKenzie should stand down, the PM said: “I continue to support the minister but I also take very seriously the Auditor-General’s report that was handed down”.

He said funding was delivered to eligible sporting projects “all around the country” and “every single rule was followed”.

“This was about ensuring the girls didn’t have to change behind the sheds, they could actually have a changing room in the shed – that’s what the program was about,” Mr Morrison said.

“I think it’s important to, yes, acknowledge the issues in the Auditor-General’s report.

“But I think we also have to remember this program was about supporting local communities who were supporting themselves – fundraising much of the money to support the grants that were made.”

"I continue to support the Minister" – Prime Minister @ScottMorrisonMP says Bridget McKenzie retains his support, amid calls for her resignation over the sports rort scandal. pic.twitter.com/FC6ltosJaR

Labor has called for Ms McKenzie to resign and pointed to their former sports minister Ros Kelly who stepped down from the ministry and then parliament in 1995 following a similar affair.

But Senator McKenzie is refusing to apologise and has the support of the Prime Minister, who said no rules were broken despite allegations of ‘pork barrelling’ – funding sports clubs in marginal seats rather than on merit.

“What I’m doing is taking the auditor-general’s report seriously and clarifying the legal issues that were raised,” Mr Morrison told Nine’s Today show on Monday.

“Every project that was funded was eligible for funding. All the rules of the program were followed. The Auditor-General found that – that’s different to what happened in the Ros Kelly affair.

The Prime Minister’s support hasn’t quelled the outcry against Senator McKenzie’s action, as her  political future remains under siege.

Labor leader Anthony Albanese, independent MP Zali Steggall and One Nation leader Pauline Hanson are among the chorus calling for the deputy Nationals leader to resign.

Senator Hanson, The Greens and Centre Alliance have offered to support a Senate inquiry. Mr Morrison would not be drawn on whether there should be a Senate probe.

He said that while he supported Senator McKenzie, the government would “move quickly” to “clarify” legal issues raised in the report.

“We’re following through on the Auditor-General’s recommendations,” Mr Morrison said.

Labor small business spokesman Brendan O’Connor accused the government of corruption and scolded Mr Morrison for allowing it to happen on his watch.

“There’s no doubt that having looked at what’s been said by the auditor, that we have a problem with the way in which the government has dealt with this matter,” Mr O’Connor told reporters in Melbourne.

“It’s clear that they have politicised and corrupted the process for political gain.

“That has been dismissed this morning by Scott Morrison. But the fact is Scott Morrison clearly would have known the way in which grants were dealt with because he was the campaigner-in-chief for the Liberal party at the last election.”

The accusations come as a leading law firm confirmed on Sunday it is considering whether to mount a class action over the community sports scandal.

Slater and Gordon’s class actions practice group leader Andrew Baker says tens of millions of dollars in sporting club grants were awarded to clubs whose applications for funding would otherwise have been unsuccessful.

Mr Baker said that the clubs Sport Australia decided were worthy of funding but missed out may have rights to seek legal remedies.

“Every dollar that went to a club whose application should have been unsuccessful is a dollar that didn’t end up with a club that Sport Australia had identified and recommended for funding in the course of proper processes,” Mr Baker said in a statement on Sunday.

“These community organisations, clubs and groups have lost out because it appears public funds were used for political gain.”

He said a thorough investigation by the Australian National Audit Office has stated that there was no legal authority evident to it which allowed the minister to approve the grants, rather than Sport Australia.

“This raises serious questions about the lawfulness of the conduct involved,” he said.

“In these circumstances, the clubs that have suffered because of any unlawful conduct may have rights to seek legal remedy.”