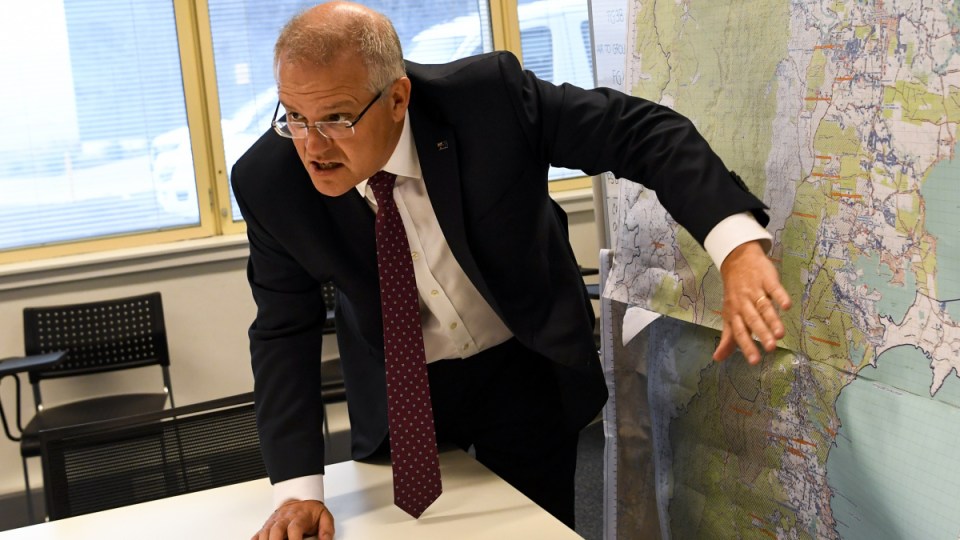 Prime Minister Scott Morrison takes a look at a map of the South Coast area impacted by bushfire during an operational update at HMAS Albatross in Nowra on Sunday. Photo: AAP
opinion

Surely by now it must be clear that conventional approaches to political leadership are next to useless in grappling with the impending catastrophe of local and global climate change.

Clearly Prime Minister Scott Morrison has learned nothing from the failure of Malcolm Turnbull to confront the dullards and dinosaurs within the Coalition (perhaps he is one of them).

Meanwhile, Anthony Albanese feels compelled by short-term electoral considerations to straddle the barbed wire fence dividing coal industry-dependent workers and the Greens, who have shown themselves willing – eager, even – to sacrifice policy progress in order to make gains at the expense of the ALP.

Are we, as a nation, really prepared to endure another three years – or six, or even more – of this nauseating roller coaster of energy and climate policy which not only contributes to higher energy costs for Australia, but also significantly adds to global greenhouse gases?

Are we prepared to stand by while our international reputation is trashed and our economy is put at risk of trade barriers based on our status as one of the world’s highest per capita emitters?

If Scott Morrison is not prepared to show real and urgent leadership, then he needs to get out of the way so we can try a different approach.

It is a fair bet that a clear majority of members of the Federal Parliament would be in favour of much stronger climate policy and much clearer policies for transitioning to clean energy.

Indeed, given the dire circumstances we find ourselves in as a nation, it would be perfectly appropriate to ask each and every one of them what their exact position is and then install the best of them in a kind of wartime cabinet to get us through this mess.

At the very least, the ALP would have a role to play supporting – even working with – non-ALP parliamentarians who are suitably qualified and disposed to implement and embed an agreed and durable set of policies?

Such an arrangement need not be forever. Just as wartime cabinets are not expected to be permanent.

But it would enable the government to confidently confront vested interests.

We could then take our place on the international stage, where we should be urging the great powers to show leadership in turning strategic and trade negotiations toward fighting climate change and its impacts rather than pursuing inane protectionist policies and arms escalation.

The crisis challenging current and future generations dictates that it is high time for our leaders to acknowledge the enormity of the fight we face and embrace new approaches. It’s time to fight fire with real political fire.

Garry Weaven is the founder and retired chair of IFM investors and The New Daily. He is a life member of the ALP.

Why the national bushfire emergency needs a wartime cabinet