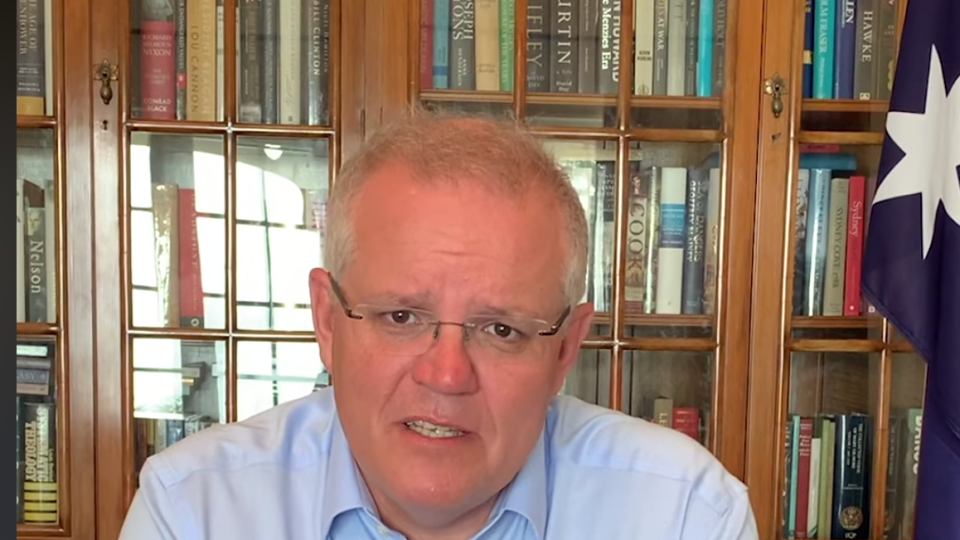 Abused by Cobargo’s survivors, his handshake rejected by a volunteer firefighter and then criticised for a leadership deficit by a fellow Liberal and NSW minister, Prime Minister Scott Morrison is now being slammed for putting his name to an ad spruiking his Coalition government’s efforts to address the national bushfire crisis.

“Party-political advertising milking ASF support to civil agencies fighting bushfires is a clear breach of the reciprocal non-partisanship convention applying to both ASF and Ministers/MP,” the ADA said.

On Sunday the PM defended the much-criticised video which has been labelled it “shameless” and a breach of political advertising rules.

“It wasn’t a Liberal Party-sponsored ad, it was authorised by me. I’m the leader of the Liberal Party,” Mr Morrison told reporters.

Mr Morrison said he would “reject absolutely” any suggestion the video was a political advertisement.

“The postings that we’ve made have been to inform the community about what the Commonwealth government has been doing.”

Incensed by the ad, the ADA also ridiculed the video plug, issued not by the government but the Liberal Party, for its “cliche-ridden” text and faulty grammar.

We’re putting more Defence Force boots on the ground, more planes in the sky, more ships to sea, and more trucks to roll in to support the bushfire fighting effort and recovery as part of our co-ordinated response to these terrible #bushfires pic.twitter.com/UiOeYB2jnv

“They put out a media release giving people all the information so you have to ask yourself what the purpose of the ad is – and the purpose is clearly party political advantage. And that is just plain wrong.

“The defence force needs to be professionally and institutionally non-partisan, and for that to work the politicians have to respect it.

“We’ve complained about this before. It usually happens during election campaigns.”

In a follow-up tweet the ADA questioned “the speed of publication and purpose of this ad.”

“Dragging the ADF into party-political controversy, needs to be explained. Not a good look at best.”

Mr Morrison even came under scrutiny from overseas, with British broadcaster Piers Morgan slamming the video as a “self-promotional commercial with cheesy elevator music”.

“This is one of the most tone-deaf things I’ve ever seen a country’s leader put out during a crisis. Shameless & shameful,” he posted.

“On a day we have catastrophic fire conditions, in the midst of a genuine national crisis, Morrison, the marketing guy, does what? He releases a Liberal Party ad! He is no longer fit to hold the high office of prime minister,” Mr Rudd tweeted.

The ad controversy erupted as Australians in four states reeled from the impact of the flames or braced for their arrival.

On Kangaroo Island some 300 people waited at a relief centre in the town of Kingscote for transport back to the South Australian mainland after an overnight inferno gutted the tourist mecca of Flinders Chase national park and left the ritzy Southern Lodge a blackened wreck of charred concrete and crumpled steel.

Locals were also stunned by the deaths of pioneering bush-tour pilot Dick Lang, 78, and his son, Clayton, a prominent plastic surgeon. Their bodies were found in and beside their burned-out SUV with trailer attached.

About one-third of the island was razed before the fury of the threat was downgraded.

HMAS Adelaide, the Navy’s largest ship, was steaming at maximum speed towards the disaster zones, ready to take on fire refugees from the small towns along the way and deliver 300 tonnes of emergency supplies as needed.

Across NSW, 162 fires were raging as midnight approached, with 82 uncontrolled. By dawn’s first light on Sunday only two emergency alerts were in effect across the state.

In Narooma, an oceangoing fishing boat was taking aboard residents, ready to put to sea if the town burns. Other residents were sleeping in the beach car park amid choking smoke, ready to wade into the waves if the worst fears for the town come to pass.

Complicating firefighting Saturday night’s efforts was the blustery wind blowing up from Victoria, where navy vessels were returning to Mallacoota for a second wave of evacuations after delivering the first shiploads of residents and holidaymakers to safety in Western Port after a 20-hour voyage.

Mallacoota, its heart already ripped out by the new year’s fiery assault, was bracing for more grief as the same winds that surprised and wrong-footed firefighters north of the border renewed the prospect of further ember attacks.

By Sunday morning the town was out of the immediate firing line, thanks to cooler temperatures and an easing wind – so much that plans were in progress to re-open the airport and continue evacuations by air.

Bureau of Meteorology Chris Godfrey told ABC Gippsland that between 10 and 20 millimetres of rain was forecast for Gippsland over the next two days — the best news Mallacoota has had in a hellish week.

But that didn’t mean the once picturesque village could breathe easy.

Closed off from the world by smoking forests and roads blocked by fallen trees, the town is running low on fuel to keep its generator running, with no hope of fresh supplies making it through the single narrow and winding road into town anytime soon.

The scourge of fire was also lashing Tasmania, where police charged a 35-year-old man with deliberately igniting a bushfire in the Apple Isle’s northeast corner that burned more 11,000 hectares.

Several “watch and act” alerts remain in place for the cluster of fires around Mangana, near the township of Fingal.

Conditions were milder than expected across Tasmania on Saturday, but authorities are keeping close tabs on fires into the evening amid strong winds.

Amid the anguish, fear, death and bravery there were just a few small glimmers of hope.

From across the Pacific US and Canadian firefighters are on the way to do what they can to ease the burdens of their exhausted Australian comrades.

And the weather might be about to cut firefighters some slack, according bushfire expert David Packham AO.

“The fire weather forecast for the next four days shows winds from the south quarter at an overall average speed of 15-20 kph,” he told The New Daily.

“Under these conditions we can expect fires in the bush to travel at about 600m per hour for about six hours each day, close to 4km per day, unless some good rain.

“One of the Bureau of Meteorology’s forecasting models shows up to 20mm of rain for Omeo on Monday. There is also a rain depression forming off the WA coast with a ‘rain conveyor belt’,probably with a cold front down to SE Australia.

“This would provide great fire relief for a couple of weeks at least.

“So lets hope the model is right and we get Monday’s rain.”