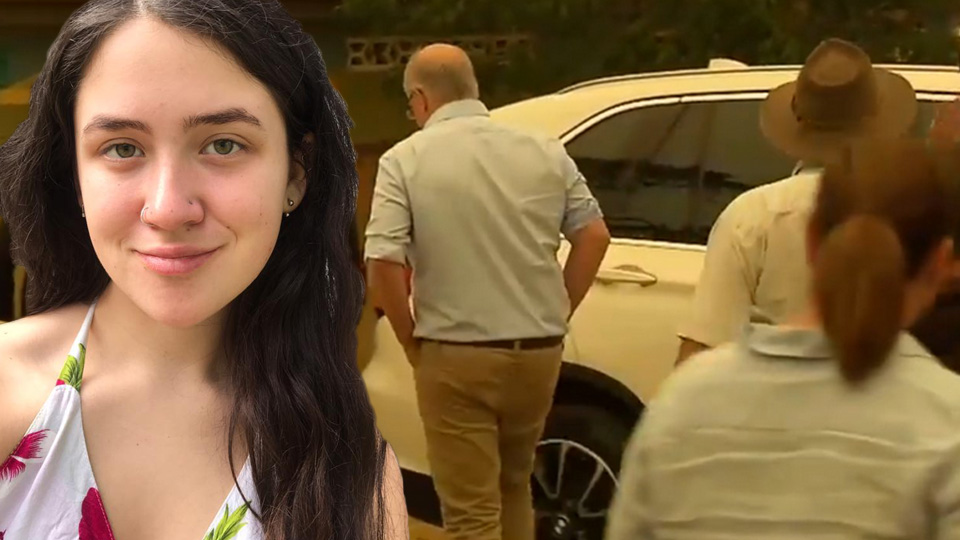 Zoey Salucci McDermott has accused the PM of turning his back on her after she confronted him at Cobargo on Thursday.
exclusive

The Cobargo mother who confronted Scott Morrison and refused to shake his hand unless he gave more money to volunteer firefighters has accused him of “turning his back on me”.

Zoey Salucci McDermott has revealed in a Facebook post that she lost her home in the bushfire inferno that engulfed the tiny Bega Valley village on New Year’s Eve.

She is the mother of a young daughter, Uma.

“I have lost everything I own,” she said.

“My house is burnt to the ground and the Prime Minister turned his back on me.”

The young mother who refused Scott Morrison's handshake during his visit to Cobargo says she was heartbroken by his response to her pleas for help. #AustraliaBurning #AustraliaBushfires https://t.co/6EoYphKL0M

Furious residents reeling from the deadly NSW bushfires confronted Mr Morrison on Thursday as anger boiled over in one of the towns hardest hit by the crisis.

As a state of emergency was declared for NSW and residents who’ve already lost friends and family in the fires awaited news of whether their homes were still standing, the PM visited evacuation centres on Thursday to offer his support.

But while he was welcomed by some evacuees, his visit to the NSW town of Cobargo was cut short after locals told him “you should be ashamed of yourself”.

In tears, Ms McDermott refused to shake his hand until the PM offered more support to volunteer rural firefighters.

“I am only shaking your hand if you give more money to the RFS. So many people have lost their homes,” she said after Mr Morrison took her hand.

This is bizarre PM @ScottMorrisonMP now says he talked this this woman the video literally shows him walking away https://t.co/FqR74jlhd3 pic.twitter.com/oAzQ7xCQUS

Another man, who locals identified as a former mayor and National Party member, Bega Valley councillor Tony Allen, then put his arms around the woman to comfort her and said, “Shush”.

The Prime Minister then turned his back to talk to another man in the crowd.

She then shouted after the Prime Minister, “We need more help!” as Mr Allen replied: “We know that.”

As the scene turned ugly, a group of men and women shouted at Mr Morrison, telling him he is “an idiot”.

“You won’t be getting any votes down here, buddy,” one resident yelled.

"What about the people who are dead, Mr Prime Minister?"

Australian PM Scott Morrison was confronted by angry crowds as he visited the town of Cobargo in New South Wales, which has been devastated by bushfires.

As the abuse continued, the Prime Minister retreated to a white car as a local man yelled: “You’re not welcome” and, “Go back to Kirribilli”.

A woman holding a goat on a lead then complained the town wasn’t getting enough help.

“This is not fair. We are totally forgotten down here. Every single time this area gets a flood or a fire we get nothing,” she said.

As the Prime Minister’s car exited the town, residents cheered and yelled: “Ya scumbag!”.

Two local farmers, Patrick Salway and his 63-year-old father, Robert Salway, were discovered dead at their property near the town earlier this week after battling to save their home.

After Thursday’s confrontation, Mr Morrison was interviewed by an ABC reporter who said, “You have been welcomed in many parts, not so welcome at the show grounds. Some people felt you let them down.”

Mr Morrison replied: “In every circumstance, everyone understands that. I appreciate the welcome we received, Jenny and I but, at the same time, I understand the deep feelings.

“There are dangerous days ahead and we understand that. That’s why we’ll do everything we can to ensure they have the support they need.”

It is understood that the bodies of the Salway men were found by Mr Salway’s wife, Renee, who is expecting the couple’s second child.

“I love you now, I love you still, I always have and I always will,” Renee Salway said on Tuesday night.

“I will see you again Patrick, my best friend. Hope you are up there ‘fixing things in the stars tonight’.”

Meanwhile, tourists are making their way back to Canberra, Sydney and Melbourne as huge traffic jams clogged the coastal roads after authorities urged them to “get out” before Saturday’s catastrophic conditions.

“These will be dangerous conditions, the same or worse than New Year’s Eve,” the RFS said.

“If you are holidaying in the Shoalhaven region, particularly in the areas identified on the map, you need to leave before Saturday. Residents within this area should be aware and prepare for the worsening fire conditions on Saturday.”

The areas where tourists and residents are being urged to flee now include the Snowy Mountains, from Hyams Beach down to the far south coast near the Victorian border, and the town of Batlow which authorities have warned they cannot defend.

PM ‘turned his back on me’ – devastated Cobargo bushfire victim