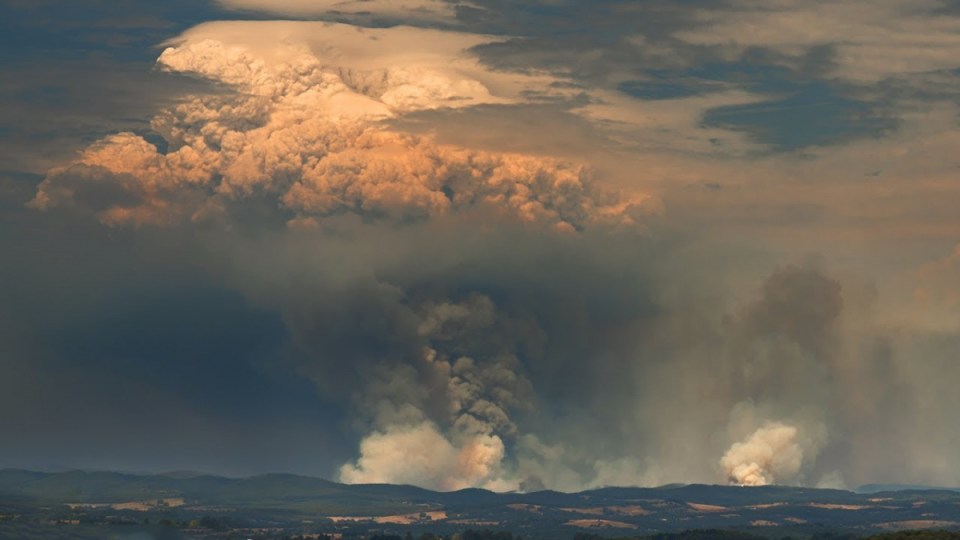 Thunderstorms generated by bushfires are adding to the dangers in NSW.

Warnings of fire-generated thunderstorms over bushfires have been realised on the NSW south coast amid fears they could cause lightning strikes and accelerate volatile fires that have already burned 219,000 hectares and remain out of control.

The NSW rural fire service earlier warned residents that a forecast heatwave and deteriorating weather was likely to pose further risks for firefighters dealing with a large blaze burning between Nowra in the north, Braidwood in the west, and Batemans Bay in the south.

There were concerns the fires could jump the Shoalhaven River and into Kangaroo Valley as temperatures soar on Tuesday into the high 30s.

On Monday afternoon, the NSW RFS issued an alert about a fire-generated thunderstorm that had formed over the Badja Forest Road and Tuross Falls Road fires, north-west of Cobargo.

“This is a very dangerous situation,” the RFS warned in a tweet.

“Monitor the conditions around you and take appropriate action.”

A fire-generated thunderstorm has formed over the Badja Forest Road and Tuross Falls Road fires, north-west of Cobargo. This is a very dangerous situation. Monitor the conditions around you and take appropriate action. #nswfires #nswrfs pic.twitter.com/bJAGGP1LMg

At a public briefing for local residents in Bateman’s Bay, NSW, on Sunday, the RFS said the next few days would be particularly problematic.

“We need to be prepared for what’s coming over the next 36 hours,’’ RFS Public Liaison Officer Marty Webster said.

“These fires are very likely to grow over the next couple of days. And grow quite significantly and perhaps erratically.”

The RFS said there was already evidence of fire-generated thunderstorms, known as a pyrocumulus cloud or fire cloud, that can create dry lightning.

“We saw some fire behaviour yesterday out at the bottom end of the Currowan fire …that was consistent with what we call fire cumulus that’s where the fire connects with the atmosphere and starts generating its own weather,’’ Mr Webster said.

In case you were wondering, this is what a pyrocumulus cloud looks like (taken from #qf499 looking west towards the Blue Mountains) pic.twitter.com/i6jmUfbUYC

“So some of those storms we saw yesterday were created by the fire. When we do get those sorts of conditions its extremely difficult to predict where the lightning will come out of those fires.

“So, I don’t want to be alarmist about this but there’s a high possibility of new starts as well as the current fires. I want everyone to be clear that is quite a likely outcome.”

Meanwhile, the Prime Minister’s decision to announce payments of up to $300 a day for self-employed rural fire service volunteers and those working for small businesses has sparked calls to extend the scheme to other states.

Scott Morrison has maintained that the clear message from volunteers is they do not want to be paid but has now announced a scheme to offer some relief after weeks of pressure.

It is only available to volunteers who are self-employed or working for a business with a turnover of under $50 million.

“While I know RFS volunteers don’t seek payment for their service, I don’t want to see volunteers or families unable to pay bills, or struggle financially as a result of the selfless contribution they are making,’’ he said.

“This is not about paying volunteers. It is about sustaining our volunteer efforts by protecting them from financial loss.”

“People were already struggling financially in the field and having to choose essentially between continuing to work to protect local communities or be able to pay their mortgage and put food on the table for their families,’’ he said.

I look forward to written advice from @ScottMorrisonMP about compensation for QLD volunteer firefighters. Our volunteers – like every other state – deserve to be treated the same as everyone else and we should have a national approach. https://t.co/k1PDXL6IAI

“The important thing is that bushfire fighters will now receive some compensation and that is a very good thing.

“The problem here, of course, is that, because it’s just NSW, one of the things that I know from being on the ground on the north coast, in Queensland, on the South Coast is that many of the firefighters I’ve met have been travelling from interstate.

“These fires don’t recognise state boundaries and nor do firefighters, I’ve got to say. I’ve met Victorians and Queenslanders and those globally of course who have come to help on the north coast, the south coast, the Blue Mountains and the Hawkesbury.”