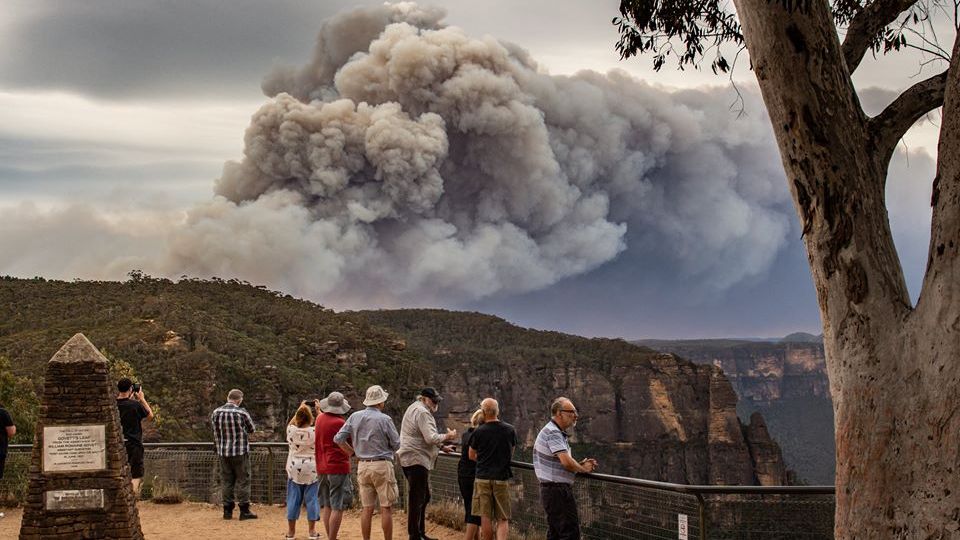 Several mountains in NSW have been impacted by fire. Photo: Facebook/Nina Lipscombe Art

Parts of Australia are set to swelter through a scorcher of a week, with temperatures forecast to exceed 40C for days and predictions the mercury could tip to over 50C in desert areas.

In the meantime, destructive fires across New South Wales and Western Australia are burning through hundreds of thousands of hectares, with residents being told it was too late to leave.

Blue Mountains resident Nina Lipscombe captured the aftermath of “scary” fires burning in the Mount Wilson and Mount Tomah in photographs showing huge smoke plumes after winds “took things to the next level”.

“This is very worrying for residents of the Blue Mountains,” she told The New Daily on Monday morning.

“Depending on the winds our towns…are either covered with a heavy brown smoke haze making it difficult for people with asthma and allergies to breath, or it is clear enough to see the massive smoke clouds surrounding us in all sides.”

As weary firefighters are battling multiple emergency fires, a thick haze of smoke continues to blanket much of Sydney.

Air pollution levels are so hazardous that a group of medical professionals has declared a “public health emergency” in the NSW capital.

A joint statement signed by 22 health and medical organisations which comprise doctors, nurses and medical scientists has urged federal and NSW governments to “protect the people they represent” and “help alleviate the health and climate crisis”.

In the statement released on Monday morning, the alliance said “there is no safe level of air pollution” and what’s expected in the immediate future “remain hazardous to people’s health”.

They said the toxic air pollution was linked to diseases including impaired lung development in children, heart disease, lung cancer and premature births.

The Australian Nursing and Midwifery Federation, the Australian College for Emergency Medicine, the Thoracic Society of Australia and New Zealand and Lung Foundation Australia are among the signatories.

Meanwhile, NSW along with South Australia and Victoria can expect to see the worst of the heat, along with elevated heatwave and fire threats.

Sweltering condition will hit Adelaide on Tuesday and continue until Friday when the mercury will peak at 44C.

The South Australian capital is predicted to hit temperatures either at or above 40C for four days straight, while remote parts of the state such as the Nullarbor Plain are forecast to approach 50C.

Broken Hill in NSW and Victoria’s Mildura will sizzle through a 46C day on Friday, according to the Bureau of Meteorology.

South Australia’s western districts and Eyre Peninsula will also sweat through hot and sticky nights as temperatures throughout the week reach the high 40s.

Weather conditions will be “right up there” across the country, BOM senior forecaster Tom Boeck said.

“We’re expecting heatwave conditions to be increasing through the week,” he told the ABC.

“With that, there will obviously be increasing fire danger … probably peaking towards the later part of the week with winds also increasing and that’ll be ahead of a change.”

For NSW, residents in the path of the major Gospers Mountain blaze which is more than 378,000 hectares in size have been told it’s too late to leave.

The RFS early on Monday advised residents in these areas that fire activity had reduced and posed no immediate threat.

Watch and Act: Gospers Mountain (Hawkesbury LGA). Fire activity has reduced in the areas of Mt Wilson, Mt Irvine, Mt Tomah and Berambing. Although fire is still active in areas, there is currently no immediate threat. More information and advice: https://t.co/b4FQYZqba0 #NSWRFS pic.twitter.com/XXjQZ1t3X6

RFS deputy commissioner Rob Rogers told ABC TV on Sunday evening there were reports of properties being impacted and some being alight.

A home at Mount Wilson was lost and several sheds and buildings at Mount Tomah were destroyed, The Daily Telegraph reported.

Severe heatwave conditions will hit most of NSW by the end of this week.

In Western Australia, firefighters are battling three major bushfires burning over more than 20,000 hectares, with two of them threatening lives and homes.

Emergency warnings remain for the two bushfires declared in the northern Perth regions of Yanchep and Mogumber.

One house and a Yanchep service station were confirmed to have been destroyed.

The emergency alert remains in place for Woodridge and Seatrees and Breakwater Estates.

DFES said the fire remains stationary but there is a high risk of flare-ups, with the wind due to strengthen and swing on Monday afternoon.

Two temporary evacuation centres were set up at Gumblossom Community Centre and Granville Civic Centre. Community meetings will be held on Monday at 10am and 2.30pm.