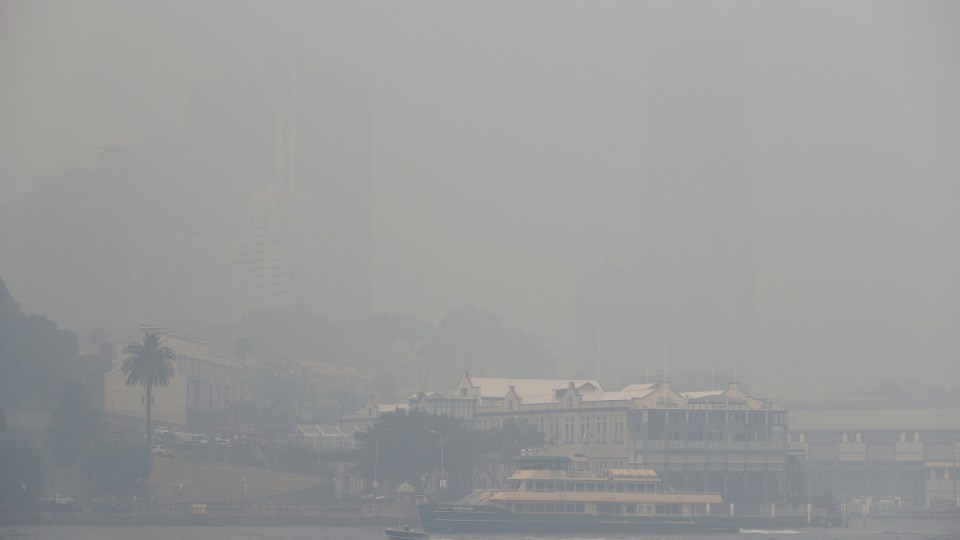 A ferry on Sydney Harbour amid thick smoke on Tuesday morning. Photo: AAP

Sydney ferry services were cancelled and workplaces evacuated on Tuesday as the city’s air quality soared to as much as 12 times hazardous levels.

The smoke is from bushfires ringing the harbour city – including in the Hawkesbury region and near Warragamba Dam.

It choked the harbour city on Tuesday, prompting a shutdown of Manly ferries because of poor visibility and setting off smoke alarms across the city.

Ironically, the NSW Rural Fire Service headquarters in Homebush was was one of the first buildings affected. It was briefly evacuated on Tuesday morning, after its smoke alarms went off.

Alarms were also set off across Sydney’s CBD, including in the city’s law courts, and train operators warned of possible disruptions to rail services. Elsewhere, local landmarks such as the harbour bridge and opera house disappeared behind a toxic haze.

“This amount of calls peaked between 11am and 12 midday with 154 automatic alarms, as a result there’s also been over 335 triple-zero emergency calls,” he said.

Mr Mentha said the volume of calls was unprecedented and had increased as the smoke cloud “descended on the city”.

He urged those whose alarms were triggered by actual fires to call triple zero and alert authorities that theirs was a real emergency.

The warning came as temperatures soared across NSW and, just after 1pm on Tuesday, an emergency alert was issued for the Three Mile blaze in the Hawkesbury region.

The fire is just east of the so-called megafire centred around Gospers Mountain, which is at “watch and act” along with two neighbouring blazes.

Ferries are not running due to thick smoke. Buses are being organized to replace F1 Manly services but aren't on site yet.

NSW Health said residents should cut back on outdoor activity because of the dangerous air.

Dr Broome also warned Sydney-siders that masks “might not be providing the benefits that people think they are” during the prolonged exposure to smoke in the city.

“P2 or N95 face masks are in theory effective against smoke, but there is evidence that in order for them to work, you have to have a really good fit and it is quite hard for people to achieve that in practice,” Dr Broome said.

“The evidence is that whilst they can be effective, they might not be providing the benefits that people think they are.”

The worst air quality readings were at Macquarie Park in Sydney’s north-west, which recorded of 2214 between 9-10am on Tuesday.

Parramatta North had reached 2024, with levels continuing to rise.

Any region with an AQI over 200 is considered “hazardous”.

The high readings are largely due to poor visibility, although particle levels are also well into hazardous territory in several locations.

While smoke has been near-permanent fixture in Sydney this bushfire season, residents took to social media on Tuesday to lament the “worst” air quality they had seen.

“Woke up this morning to the worst smoke haze I have ever seen in our local area,” Samantha Waterfield in Belmont North said.

“Definitely the worst the conditions on the Northern Beaches have been. I’ve had no voice for three days from the smoke, I can’t imagine how people living closer are coping,” Kelly Owens said on Twitter.

The weather bureau said skies would clear later on Tuesday, thanks to a wind change.

But that is also when the extreme heat will hit, with temperatures forecast to reach 42 degrees in some western suburbs.

NSW Rural Fire Service Commissioner Shane Fitzsimmons said wind speeds on Tuesday would not be as high as previous dangerous bushfire days, but high temperatures and low humidity would cancel this out.