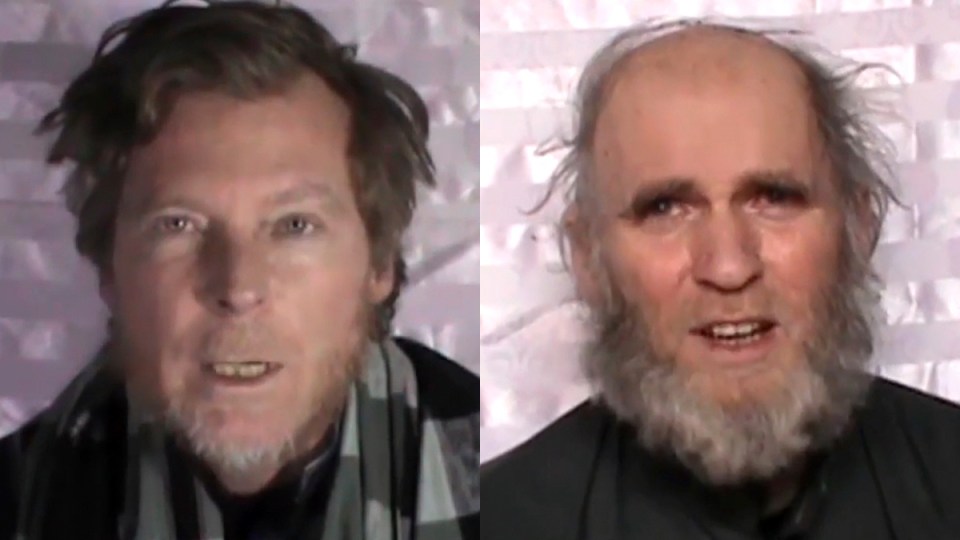 Timothy Weeks and Kevin King in the Taliban video of January 2017. Photos: AAP

The father of Australian Timothy Weeks says the family is “relieved” to hear he has been released, after three years of anguish over what would happen to the teacher held captive in Afghanistan.

Scott Morrison has hailed the role of US President Donald Trump in helping to secure the release of Mr Weeks and his colleague.

Three Taliban terrorists linked with brutal crimes in the region have been released as part of the swap deal.

Mr Weeks was handed over to US special forces on Tuesday night (Australian time), and is undergoing medical checks. He will likely be taken to Germany for further care.

His father Mervyn told the ABC on Wednesday morning it was unclear whether Mr Weeks would come home to Australia and he was yet to have a chance to speak to his son.

The Prime Minister confirmed the release of the Australian on Tuesday night, revealing Mr Weeks’ family had asked “for privacy” as he prepares to undergo medical treatment after years in captivity.

In a statement, the Weeks family said: “We are grateful for the efforts of the Australian government in securing Tim’s release. We would like to thank the United States government for the significant role it played in securing Tim’s freedom and acknowledge the important contribution of the government of Afghanistan.

“We thank our friends and extended family for their love and support over the past three years during this very difficult time.

“While we understand the intense public interest in Tim’s release, we do not want to comment further.”

The family had been hopeful Mr Weeks would reach safety last week but the prisoner swap was called off.

The deal was brokered by the American peace envoy, Zalmay Khalilzad.

We are profoundly pleased and relieved Australian Tim Weeks & his US colleague, Kevin King, who were held hostage since August 2016, have been released by their kidnappers today in Afghanistan. We convey deep appreciation to the Governments of the United States & Afghanistan.

“We are profoundly pleased and relieved that Tim Weeks and his US colleague, Kevin King, who was held hostage since August 2016, have been released by their kidnappers today in Afghanistan,” Mr Morrison said.

“The Australian government offers its deepest appreciation to President Trump and the United States for their immeasurable assistance and co-operation, without which we would not be able to welcome Tim back today.”

They appeared to be in ‘‘fair health” and were flown to the Bagram Air Base in northern Afghanistan.

The two men were teachers at the American University of Afghanistan in Kabul when they were abducted at gunpoint in 2016.

One year later, the terrorists holding them captive released a tearful video of Mr Weeks begging for freedom.

“I don’t want to die here, not alone, not here. Please speak for me now, speak to the American government, and please, please help me secure my release,” he said.

The three Taliban prisoners were flown to Doha, Qatar.

They include Anas Haqqani, the younger brother of Taliban deputy Sirajuddin Haqqani, who also heads the Haqqani Network.

“We also convey our deepest appreciation to the government of Afghanistan, led by President Ghani, for its invaluable assistance with this case over the past three years,” Foreign Minister Marise Payne said.

“We regard this release as one of a series of confidence-building measures that are taking place in Afghanistan. We hope that such measures will set the stage for a ceasefire and intra-Afghan dialogue.”

The Australian government has provided consular support to the Weeks family throughout this case.

“Tim’s family has asked for privacy. They have asked the Australian government to convey their relief that their long ordeal is over, and their gratitude to all those who have contributed to Tim’s safe return,” Mr Morrison said.

“For privacy and operational reasons, the Australian government will not comment further on the details of this case.”

Australia’s travel advice about Afghanistan remains at the highest level – “do not travel” – due to the extremely dangerous security situation, including the risk of kidnapping and random terrorist attacks.