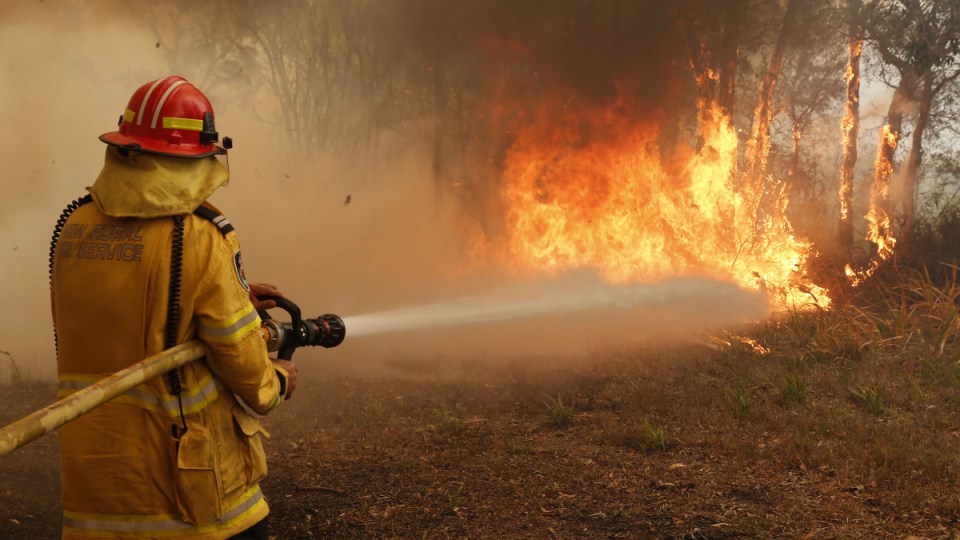 Scott Morrison and Gladys Berejiklian were briefed on the bushfires during a visit to northern NSW. Photo: AAP

Prime Minister Scott Morrison and NSW Premier Gladys Berejiklian have learnt first hand the difficulties firefighters are facing trying to tackle the raging fires in the north of the state.

They received a briefing on the unprecedented firestorms at the Mid-North Coast Fire Control Centre in Wauchope on Sunday, where they were told firefighters have found it hard to contain and access some fire areas.

Mr Morrison was heckled during the briefing by a climate change protester.

“Climate change is real, can’t you see,” the man yelled, before being escorted out of the building.

Natural Disaster and Emergency Management Minister David Littleproud warned the fires in NSW and Queensland could get worse on Tuesday and when there are also concerns of potential catastrophic fire levels in Western Australia.

He urged people to listen to the instructions given by firefighters in affected areas.

“We cannot take this for granted, this a very, very frightening circumstance that people have to take seriously,” Mr Littleproud told Sky News on Sunday.

The military have also been called in to bring firefighters from interstate to help in NSW and Queensland, and are also being asked to help with catering, accommodation and some backburning.

The Australian Government Disaster Recovery Payment and the Disaster Recovery Allowance have been activated to provide financial assistance, payment that provide $1000 for adults and $400 for children that have lost their homes.

“That is just to get people through the here and now. We understand there is a bigger job to be done,” Mr Littleproud said

He urged fire victims to contact Centrelink to receive their payments from 12 pm on Sunday.

Labor Leader Anthony Albanese said he is intending to visit the bushfire areas when it is appropriate.

“One of the things that we should ensure, though, is that politicians don’t get in the way of the work that has to be done,” Mr Albanese told ABC television.

He said he had spoken the prime minister on Saturday, who at that stage hadn’t planned to visit northern NSW.

“These are really extraordinary circumstances, particularly at this time of the year, at the beginning of the season or before the normal bushfire season,” Mr Albanese said.

“And to have fatalities, to have so many people missing, my heart goes out to them.”