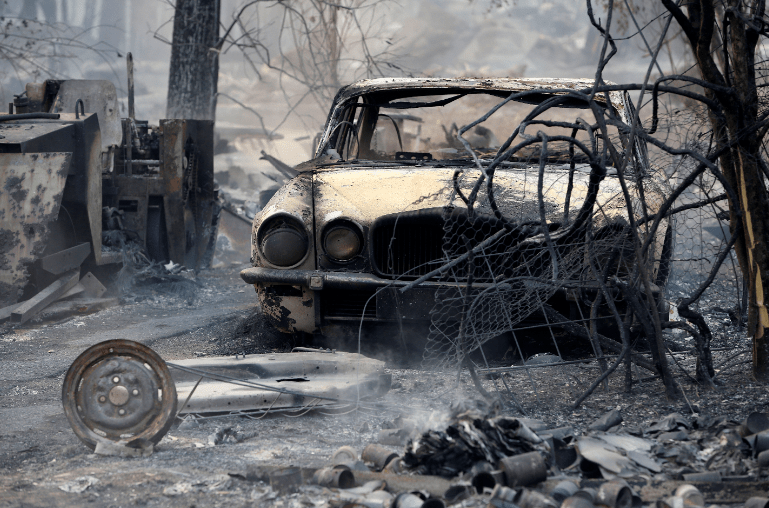 All that is left of classic Jaguar in the charred desolation near Taree. Photo: AAP/Darren Pateman

All three people who died in the unprecedented bushfires have been identified, after more than 150 houses were lost as firestorms raged from the New South Wales mid-north coast to the Queensland border.

Julie Fletcher, 63, and George Nole were named by multiple media outlets on Sunday as the second and third victims, after 69-year-old Vivian Chaplain, who died on Saturday morning, trying to protect her home at Wytaliba on Saturday.

Her neighbour Russell Souter said she was a “quality person”.

“Her family has been in the area for generations and own quite a bit of land,” he told the ABC on Sunday.

“It is just a tragedy. I’ve spoken to her [Ms Fletcher’s] sister.

“The family are devastated.”

Mr Nole’s body was found in a car at the Kangawalla fire ground, near Glen Innes, in state’s north.

In tributes posted to Facebook, neighbours and friends described Mr Nole as creative and eccentric.

Mr Nole was a well-known figure in the Glen Innes community.

Peoples in Wytaliba, near where he lived, called him a “true gentleman”

All seven people that were missing during Saturday’s fires have been accounted for, the NSW Rural Fire Service (RFS) reported.

The historic blazes decimated small towns across NSW overnight and into Sunday afternoon, with 72 fires currently burning across the state, 36 of which were not under control.

Prime Minister Scott Morrison warned Australians to prepare for “worse news” to come, while the RFS warned “lives will be at risk”.

Two fires are still at emergency warning alert level at Hillville near Taree and Cooperabung north of Port Macquarie, while 11 fires remain at a watch and act level.

An emergency warning was also issued for the Adelaide Park and Cobraball fires in central Queensland on Sunday afternoon.

On Sunday morning, firefighters had only begun to access areas hardest hit by the fires, including in the tiny hamlets of Wytaliba near Glen Inness and Bobin near Taree.

Mr Morrison said army reservists could be deployed “if necessary” as emergency services continue to battle some 80 blazes across the state. About 40 are not contained.

“These fires will burn for some time,” he said at Kirribilli House.

The RFS said it was likely to issue severe or extreme fire danger warnings from the Queensland border to areas south of Sydney, and the Central West in the coming days.

“Areas in the Sydney, Illawarra, Hunter and Central West, those areas are looking at getting extreme fire risks,” RFS Deputy Commissioner Rob Rogers said on Sunday.

The RFS added Tuesday will likely see widespread severe and extreme fire danger from the Queensland border to the south coast and across the central west.

“Tuesday 12 November will be a dangerous day,” it tweeted.

“With so many fires already burning, homes and lives will be at risk.”

People had little more than the clothes they were wearing when they arrived at the evacuation centre at the Glen Innes showgrounds, local Red Cross coordinator Margaret Kiehne told AAP.

“The children arrived in school uniforms – some had no shoes, just shorts and shirts,” she said.

“When the first lot of children arrived they were very traumatised. When the second lot came it was very emotional. They saw their mates, ran to them and threw their arms around them.”

It’s thought some 20 properties were destroyed in Wytaliba with the local primary school severely damaged.

MidCoast Council mayor David West cried as he spoke to worried residents – including parents, children and grandchildren – at a local evacuation centre where they’d fled from the blaze.

The retired policeman – who lives in Brimbin – said the fire was “a disaster of magnificent proportions”.

“To go into a room of a couple of hundred of people and talk to them, I’m sorry, I broke down and cried, you feel so helpless.”

BOM meteorologist Katarina Kovacevic says while temperatures were cooler on Saturday, southerly winds tending southwesterly in the afternoon gusted up to 50km/h.

High temperatures combined with low relative humidity and strong northwesterly winds will increase the fire danger on Tuesday and Wednesday in northern NSW and southeast Queensland.

NSW Premier Gladys Berejiklian on Saturday warned “we’re not through the worst of it”.

“The situation is very serious,” she said in a statement.

“People have lost their lives and seven people are currently unaccounted for.”

The premier has appointed a recovery coordinator to oversee the official response to the bushfire emergency and said she would make “every [resource] available” to firefighters this week.

Federal Minister for Resources and Disaster and Emergency Management David Littleproud said “immediate financial support” would be made available to northern NSW residents affected by the fires.

I just can’t explain how bad it was

For Douglas Wood, leaving his home was never an option. As yesterday’s ferocious fire approached his Bora Ridge property, the former Blue Mountains RFS group captain prepared himself to fight.

The 54-year-old told the ABC he managed to save his neighbour’s property — and his mum and dad’s house next door.

But as all this happened, he said he watched his own home go up in flames.

“We just did our best,” he said. “I just can’t explain how bad it was.

“I was just so intense. It was unbelievable.

“I have seen plenty of fires, and this is the worst I have seen in my life.”

The Bora Ridge fire, south-west of Lismore — which is now at a watch and act status — burnt through 794 hectares and destroyed multiple properties.

The RFS said many fires moved so quickly they were unable get to all those who called for help.

“We were on our own, [no] helicopters or anything,” Mr Wood said. “We saved Mum and Dad’s place so at least we have somewhere to stay.”

Mr Wood said he was now left with nothing more than the clothes on his back, and his car.

He said he was concerned they would not survive, but their bushfire plan saved them.