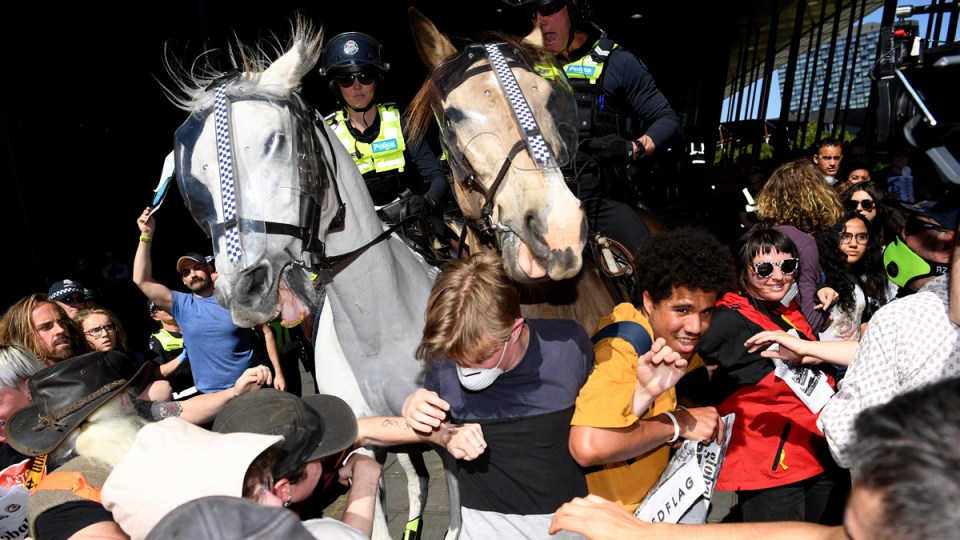 There have been violent clashes between protesters and police outside a mining conference in Melbourne this week. Photo: AAP

Scott Morrison has signalled a crackdown on “selfish, indulgent and apocalyptic” environmental activists.

In a speech to the Queensland Resources Council on Friday, the Prime Minister urged companies to ignore rowdy protesters waging “economic sabotage”.

Instead, Mr Morrison wants businesses to listen to their “quiet shareholders”.

After days of anti-mining demonstrations in Melbourne that were marred by violence, the PM warn activists that they were “testing the limits” of their right to protest.

“Let me assure you, this is not something my government intends to allow to go unchecked,” Mr Morrison will say.

“Together with the attorney-general, we are working to identify mechanisms that can successfully outlaw these indulgent and selfish practices that threaten the livelihoods of fellow Australians.”

Mr Morrison acknowledged the direct response to protests was a matter for state governments.

But he did raise the prospect of a potential ban on so-called “secondary boycotts”.

“Environmental groups are targeting businesses and firms who provide goods or services to firms they don’t like, especially in the resources sector,” Mr Morrison said.

“It is a potentially more insidious threat to the Queensland economy and jobs and living standards than a street protest.”

Mr Morrison has not set a time frame for introducing legislation to deliver on his plan.

Labor deputy leader Richard Marles said there were extensive laws around interfering with contractual relations already in place at a federal level.

“We will have a look at whatever the government is putting forward,” he told the Nine Network.

“But I think the starting point is to see whether or not this government can actually act on the laws that it hard also in place.”

For his part, Home Affairs Minister Peter Dutton wants activists to cover the costs of police responses to protests.

Mr Dutton, who has previously called for protesters to be publicly shamed and stripped of their welfare payments, called on the states to act after a week of anti-mining demonstrations in Melbourne.

“We don’t have 150 police just sitting around in Melbourne or Brisbane or Sydney waiting to respond to these people who spontaneously pull these stunts together,” he told the Nine Network.

“Police are being diverted away from other activities and there should be a price to pay for that.”

Mr Dutton, a former Queensland cop, said many of the protesters “don’t even believe in democracy”.

“This is not about free speech, it’s not about the ability to protest. These people are completely against our way of life,” he said.

Mr Dutton also took aim at courts for being too lenient on law-breaking activists.

“If you’re going to the courts eight times and getting a slap on the wrist, why wouldn’t you do it a ninth time?”