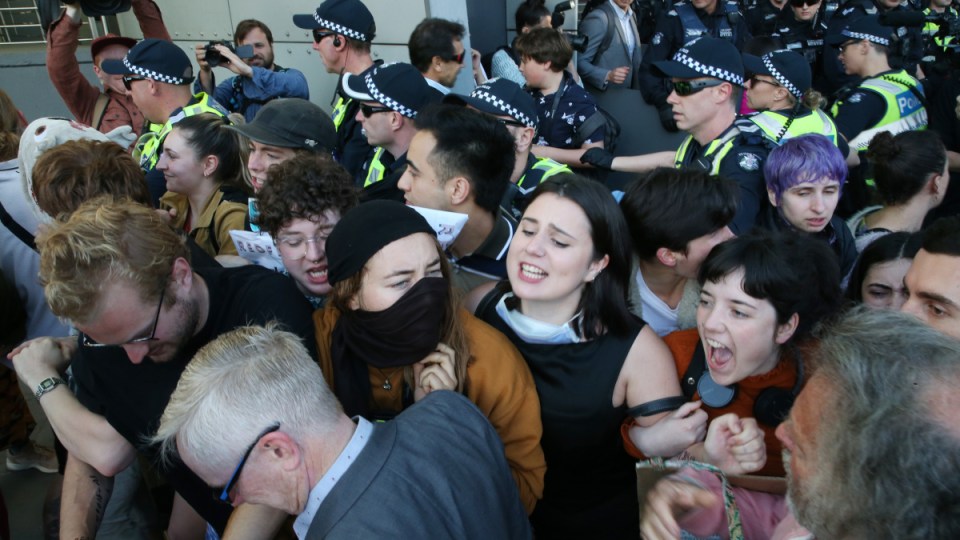 A dozen climate activists have been arrested after staging a protest outside a Melbourne mining conference. Photo: AAP

A dozen climate change protesters have been arrested on day two of action outside a global mining conference in Melbourne, where activists glued themselves to the ground.

Officers used capsicum spray to break up the blockade on Wednesday, which was designed to prevent conference delegates entering the Convention and Exhibition Centre.

It led to 12 activists being arrested, the majority for intentionally obstructing an emergency services worker, as they blocked access including via disabled ramps.

Two people who glued themselves to a carpark access ramp have since been removed while another woman who “locked on” to a handrail has come unstuck, police said.

“Whilst we respect the rights of people to peacefully protest the unlawful action undertaken today is a drain on police resources from across greater Melbourne,” a police statement reads, adding all actions taken by officers were in line with training.

An unnamed protester said she’d been told to move back before police “went wild”.

“My friend got arrested, I got pepper-sprayed; it was crazy,” she told 3AW.

Premier Daniel Andrews has backed police efforts to bring order to the protest.

“I will always support the right of every Victorian, if they so choose, to peacefully protest. But there is a big difference between peaceful protest and what we saw yesterday and potentially today,” he said, during question time in parliament.

It comes after hundreds of police and protesters clashed on Tuesday outside the conference, with four officers injured and a protester hospitalised with leg injuries.

Almost 50 people were arrested on Tuesday and police continue to dedicate hundreds of officers to the protest as the conference continues until Thursday.

Victorian Opposition Leader Michael O’Brien backed the police who are “trying to make sure that these ferals can’t stop people going about their lawful business in this state”.

Conference organisers insist it was “business as usual” inside the centre and protests had failed to disrupt the meeting, which is due to attract some 7000 delegates from more than 100 countries.

Delegates heard about commitments within the industry to prioritise ethical sourcing and meet climate change goals, organisers said, having accused protesters of being misdirected in targeting the conference.

Protesters back at mining conference