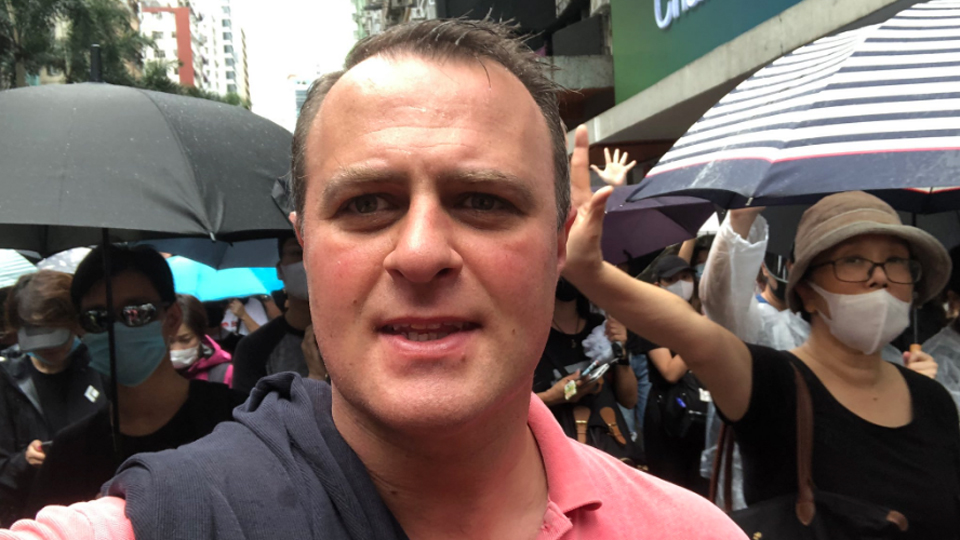 A Coalition backbencher has been accused of hypocrisy after marching alongside pro-democracy protesters in Hong Kong on Sunday night – despite having previously called for demonstrators in Melbourne to be water-cannoned.

Liberal MP Tim Wilson said he was inspired by the pro-democracy movement in the Chinese territory, where protests against Beijing have gone on for nearly five months.

Mr Wilson posted a tweet on Sunday night, in which he said he was “proud to stand with Hong Kong”.

Proud to #StandWithHongKong. Strange fact: The last time (2003) I protested in #HongKong I was wearing a pink polo as well. pic.twitter.com/7aP57qEUJG

The Victorian MP – who is in Hong Kong during federal parliament’s break – said pro-democracy protesters understood their future was at stake.

“They’re on the front line of a contest between competing world views and have picked liberal democracy – and as a liberal democrat, it’s hard not to be inspired by that,” he tweeted.

“People should take these names and the photos of these people and distribute them as far and wide as they can, so that we shame these people,” Mr Dutton told Sydney radio 2GB.

“They are acting outside of the law. Let their families know what you think of their behaviour.”

Walked past Occupy Melbourne protest, all people who think freedom of speech = freedom 2 b heard, time wasters … send in the water cannons

He said Mr Wilson was always focused on himself.

“I don’t give him a lot of thought, frankly, and nor do his colleagues,” the Labor leader said on Monday.

“I think that Tim Wilson’s opinion of himself differs from that of his colleagues, and certainly of me.”

Mr Wilson has also been accused of hypocrisy after a 2011 tweet resurfaced, in which he suggested Occupy Melbourne protesters should be water-cannoned.

“If Tim Wilson could get a run standing in front of the water cannons, he would,” Mr Albanese said.

Undeterred, Mr Wilson snapped back at the Opposition Leader:

Lolz. @AlboMP spends a lot of time thinking about how to slap down someone he doesn’t think about. Maybe he should pay attention, then he’d have known how toxic his #RetireeTax was. Maybe he wanted @AustralianLabor to lose so he could be Leader of the Opposition.

Police fired tear gas and baton-charged the crowds, while some demonstrators threw bricks and petrol bombs at police as night fell.

Protesters concealed their faces in defiance of colonial-era emergency laws invoked by the authorities on Friday, which banned face masks.

Protesters face a maximum of a year in jail for breaking the mask ban.

“The anti-mask law just fuels our anger and more will people come on to the street,” said Lee, a university student wearing a blue mask.

“We are not afraid of the new law, we will continue fighting. We will fight for righteousness. I put on the mask to tell the government that I’m not afraid of tyranny.”

Hong Kong’s four months of protests have plunged the Chinese-ruled city into its worst political crisis in decades and pose the biggest popular challenge to Chinese President Xi Jinping since he came to power six years ago.